Last week, we started with Simone’s memories of her childhood, made clear in part with the help of the Matenspel. This led to a long conversation, in which many facets came to the fore. We will discuss her experiences in more detail in a later publication, because there is so much in her story that shows how much intergenerational trauma has an impact on the well-being and health of those involved.

We talk about the role of Simone’s father in the family.
“My mother was afraid of him and he could also scream at us and say we had to clean our room ‘NOW!’ I was always more critical than my sister and I’ve argued against him a lot, had heated discussions and went against it completely, but yeah…” She makes an appeasing gesture with her hands, holds her finger to her mouth conspiratorially and whispers: “Then my mother said that I should lay low!” She sighs, falls silent for a moment and then continues at normal sound level: “There came a moment when I noticed that my father could no longer handle me verbally; I considered that cool, but the consequence was that he started threatening and that sometimes I was really hit. I thought he was a weakling, that he tried to prove himself right that way. He sometimes tried to play with me, but that physical contact felt very bad and I one day I gave him a huge blow. He was almost floored and angry he was! I said: ‘What do you want? Did I not say stop?!’ After that, such behaviour was over, but the distance between us got bigger and bigger and the worst thing was… my mother always stood up for him.

When I was young, my mother was my everything, but when I needed her support she was not there for me. I really blamed her for that, that she always got behind my father and left me in the lurch like that. She was actually always between my father and me and acted as a messenger, as his interpreter. Later I read a lot about narcissism and realised that she was the ideal ‘flying monkey’ for him. My mother said she had to leave home well before she was 16 to work for another family and never learned to stand up for herself. She was just really scared of him. My sister got along much better with my father; she got a lot more done from him, partly because they shared a number of interests and she started working for him in the business. If you’re talking about symbolic capital… being an entrepreneur, that was an example of symbolic capital in my father’s eyes. That I later completed a college education and always generated a good income… it meant nothing to him. I’ve done all kinds of things I thought my parents could be proud of; my mother would whisper that she was proud of me too, but my father was not allowed to hear that.” Her father distinguished between the daughters in all sorts of things; he used her mother to drive a wedge between the children and her mother internalised that role and also created divisions herself. Many of those patterns have persisted to this day, Simone says, and she sounds both angry and sad. 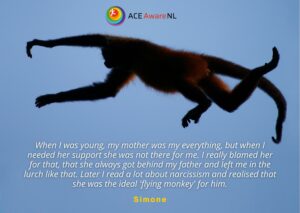 We talk about what may have caused it all and Simone elaborates on what has come to light in the family over the past few years, the role of the Catholic Church and its abuse, and the painful discovery of porn on computers in the older generation. This brings us to the saddest memories, after previously having discussed the fondest memories. Simone speaks cautiously, but does not have to think long; one memory evokes the other.
“My father thought pregnant women were disgusting; he said that to my sister and to me. I was very proud of my pregnancy and I pointed out to my Catholic father that it was something God had given us after all. He didn’t care about that; a pregnant belly and breastfeeding too… he thought it was gross. There is undoubtedly a story behind this, because such an aversion… it touches you when your father treats such topics that way. In any case, he had trouble with physicality and sexuality. We never saw our parents naked, but he did have an opinion about my body and he could also belittle me. As a child I was a bit chubby and that’s why I was called ‘Plompie’ and for years I kept getting negative comments about my appearance. During puberty I became more vocal, partly because I was appreciated at school for my discussion skills. Then again, I paid a price for my critical attitude: it increased the tension at home and made me very depressed. I started to hyperventilate, became stiff as a board, could hardly get out of bed and got all kinds of physical complaints. As a result, my performance at school dropped drastically. My father said I was lazy and that in my room I did not give a fuck about anything and that was why I got such bad grades, but yeah… I was just deeply unhappy and intensely lonely… The strange thing is that, even now, I often get along very well with people who are intellectually well versed. I feel comfortable with them and I have the feeling that they understand what I am saying when I share my story with them.” Simone tells how that loneliness led to her developing her imagination and talking to fictional people in her secret make-believe world. The disappointments continued for years: no interest in her studies, no financial support for study costs, no phone calls to find out how she was while she lived in her student room, her father’s absence at her graduation, no attention to holiday stories (but the parents’ stories in the spotlight), a cold demeanor and mean comments from her parents after she had a miscarriage, always fearing to stand up for herself because guarding her own boundaries always led to arguments and sanctions, standing up for others out of a deep need for harmony and an effort to keep or restore the peace but then again becoming disappointed or being blamed, emotional blackmail and threats (‘If you don’t like it, then you can leave!’)… it is too much to mention and it has moved her and made her vulnerable. In her own words, it has shaped her into a ‘pleaser’, based on the fear of not belonging at all and seeing everything fall apart. For years, the fact that she contributed the largest part of the family income also played a role; she did not want to jeopardise that, but because of that she lost touch with her authentic self. The pressure she has felt since childhood has gotten heavier and heavier and that is why she has now decided to work diligently on her mental health.

When I ask if she has developed behaviours that she would call ‘bad habit’ as a result of everything, she looks at me intently across the table. “Oh… that’s a difficult one…” I wait and give her time to think. She sighs. She is silent and lowers her eyes. We are silent together. After a while she looks up: “I know, you know…” “You know…?” “Oh yes, I know exactly what it is… but I find it really difficult…” The silence hangs between us. “And what makes it difficult for you…?” She sighs deeply, hesitates, searches for my eyes: “Shame…” “Shame…?” A little inquisitively, I add: “You don’t have to say it, you know…?” “Yes, I find it really difficult. I’m going to say it! I’ve made up my mind to say it more often if it’s appropriate. I also recently discussed it with my therapist and it turns out that there are certainly more people who struggle with it…” I wait to see how she will continue her tale. “Talking about it is part of the phase I’m in right now.” 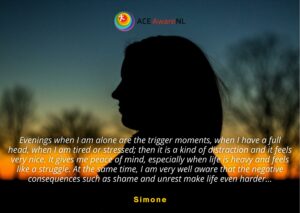 She takes another deep breath: “From the end of primary school, I started pulling my hair. I was alone a lot, I had long hair with dead ends and I pulled it out, but later it was more pulling in general and my hair has become very thin, with bald spots here and there. It has a difficult name, trichotillomania. I kept it hidden from everyone, but now a few people know. It went from bad to worse and I had the strangest thoughts about it…” She covers her face with both her hands: “I thought it was so strange what I was doing and was afraid that it would be hereditary if I had children…” She says that it was a relief to talk about it with her therapist, to find causes together and to look for solutions for how she can live with its consequences: fear of a rain shower, not daring to swim, afraid that others will see it and make comments about it… We talk more deeply and come to the question of what it brought and brings her: “It doesn’t hurt, but gives a kind of nice stimulus. I find the thick, wiry hairs and pull them out piece by piece. Evenings when I am alone are the trigger moments, when I have a full head, when I am tired or stressed; then it is a kind of distraction and it feels very nice. It gives me peace of mind, especially when life is heavy and feels like a struggle. At the same time, I am very well aware that the negative consequences such as shame and unrest make life even harder… It is difficult…”

The conversation meanders further to where Simone sees bottlenecks in society for children and young people, to recent changes in herself, and to how she takes brave steps on a path to more inner peace, in which her family is and remains the loving core. Her candour speaks volumes about her courage and her story is another illustration of the impact of early life. More awareness about this can help reflect on how we want to treat the youngest in our society, so that they do not have to ‘heal’ from their childhood. ACE Aware NL hopes to keep making a permanent contribution to this!