Last week we wanted to turn a number of interviews into blog texts. Given the length of the encounters, that turned out to be quite a challenge! The professionals we speak with have wonderful things to say about their work. A wealth of acquired experience, acquired knowledge and reflective wisdom is concentrated in these professionals, which is used for the benefit of the target group. This can be through their practice, their workshops, their research or their writing. In doing so, they are committed to carefully doing justice to human vulnerability.
This vulnerability is, in turn, clearly visible in the stories from ‘context experts’ (as differentiated from ‘content experts’). Their ‘lived experience’ shows how loss, grief and trauma are formative elements in a human life. Over the years, they all find their own ways to deal with it.

We consider it an honour to be able to listen to those (sometimes poignant) personal experiences and want to do justice to them. For us, this means that all those stories, from context experts and from professionals, deserve a place within a well-defined context. That is why we choose not to highlight a few intense, activist or confrontational quotes via ‘cherry picking’, because then the nuances disappear. Because we simultaneously try to give the blogs a manageable length, we cannot include everything people say. Experience has shown that when you take time to share an open and attentive talk with each other, time passes almost unnoticed, because narrator and auditor mutually get engrossed in the exchange. A conversation of sometimes two hours or longer can usually not be summarised in two blog parts.
All in all, this means that we save significant parts of the interviews for later publication; we will consider the precise form of this in the time ahead.

In what we publish, in whatever form, the input of the interviewee plays an important role, also in the editing process. We create the text together; it is a co-creation, so that justice is done to all people and processes involved and so that no retraumatisation occurs.

Furthermore, many people share experiences that are described by the social sciences in the form of a ‘concept’, a theoretical idea that is connected with empirical reality, with people’s true experience. An example of this is ‘trauma’ or ‘parentification’ or ‘symbolic violence’. We will occasionally discuss such concepts in the near future so that we can link to them in the blogs themselves and then not have to interrupt the interviewee’s speech with an extensive explanation. In this way we hope to be able to share as much as possible with you as readers of the impressive stories to which we are allowed to listen. The conceptual interpretation of a real-life experience is also created cooperatively.

For example, in a recent interview with ‘Simone’ (pseudonym), following a comment from her, I explained something about the different forms of ‘capital‘ that sociologist Pierre Bourdieu distinguishes: economic (money, stuff), social (network, who you know, who to ask for help) and cultural capital (knowing what is appropriate and what is expected of you, knowledge of music, history or literature). The value of your capitals in daily life is closely related to the value a certain community attaches to certain capitals: professors may attach less to knowledge about soccer, plumbers less to knowledge about quantum mechanics. The fourth form is symbolic capital; this is more or less the sum of the other three. The prestige, status, and authority that arise from these other capitals in part determine the value placed on what someone does, says or thinks; think of role models. For example, in the past the priest, the pastor, the notary and the school headmaster had a lot of symbolic capital. Today, the professions may have partly changed, but the principle has remained (think of scientists, doctors, or politicians). The one with a lot of symbolic capital has credibility, and with it more status, more influence and more power.

Abusing symbolic capital by imposing your will or primarily improving your own position is called ‘symbolic violence’. From a complicated sense of perceived self-evidence in it (“It will probably be true what the other person says, because they have the knowledge, the position, the insights”), the one who exercises symbolic violence and the one who is subjected to it together more or less implicitly maintain the status quo as a logical, natural order of things.

(So ​​co-creation here too!) Such a dynamic can also arise between parents and children. The child sees the parent’s superiority as normal and has little or no opportunity to withdraw from it. The insight that your parent was not always right and that what you already felt as a child, but could not put your finger on was indeed correct… that insight often only comes years later. By that time, the survival strategies you developed as a child are often much more deeply ingrained in your personality. Later in our conversation, Simone recognised this mechanism a few times. 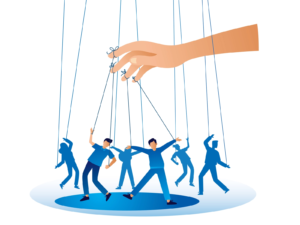 Closely associated with ‘symbolic violence’ is the concept of ‘authoritative knowledge‘, knowledge that has more authority than other forms of knowledge, because it better explains the state of the world or because it comes from more powerful parties (and usually both), making those others forms of knowledge fade into the background. It is not about the correctness of the knowledge, but about the validity. For example, in the days when the Church said the Earth was flat, this was authoritative knowledge and it was considered heresy to argue against it. Another example: the witch persecution, which kept Europe in its grip for some three hundred years (from 1450 to 1750), was perpetuated and sanctioned by the institutionalised powers. Both the scientists who claimed that the earth was round and the (mostly) older women who worked as naturopaths, healers and midwives shared non-authoritative knowledge. The type of knowledge they did bring could be classified as ‘uncomfortable knowledge’, knowledge that has the potential to disrupt the status quo, but which also has negative consequences if not applied. We see here that knowledge is not only power, but that power also leads to (sometimes unjustified recognition of) knowledge!

Young children have deep-seated needs and, in addition, an extensive set of rights, such as those laid down in the UN Convention on the Rights of the Child, which has also been ratified by the Netherlands. As a result, adults have important responsibilities. When problems arise in a child’s life or when there is trauma, in many cases we will also encounter the impact of symbolic violence, authoritative knowledge and resistance to uncomfortable knowledge. When these set the tone, it is very difficult to properly represent the child’s interests. It can therefore help to know those concepts and to see that they are anchored within the (family) system. Then it becomes easier to recognise them, which, in turn, can help to jointly determine the direction of necessary change. So here, there is also co-creation: children cannot effectuate their personal well-being on their own. In all kinds of environments, this requires a conscious, sensitive attitude from adults.

We hope that by explaining a number of important concepts we can contribute to a better understanding of various interactions and patterns and we will refer to this and other blogs where appropriate, so that knowledge is not so much power, but rather strength that can be put to use for collectively creating health and wellbeing!