Last week we started a conversation with youth health doctor Kelli. This week, even more aspects of her work are discussed, such as the challenges she experiences with parents and guidelines, as well as embedding new insights into daily practice.

We talk about how intense stress completely disrupts a person’s ability to absorb information or understand advice properly.
Kelli: “Yes, it certainly can, and in many settings it is the same as with the guidelines here: if you stick too much to your own programme and certain standard procedures, you don’t see the most important thing, or see it insufficiently, namely: what is going on for the person sitting in front of you? The question then is: do you dare to let go of that structure? Do you dare to be open to the fact that sometimes things go differently? That is actually quite exciting. After all, you also have time pressure; the next person does not want to wait endlessly, so that is often a quest.”

I ask what aspects of her job she likes most and what really makes her happy. She explains that this is very broad and that her idealism plays a major role in it, the wish that parents and children have a good time together: “I wish people more happiness and health, especially because that prevents so much difficulty later on. I know that is a very idealistic idea, but that is ultimately my motivation.”
And the counterpart… which is the hardest?
She looks a bit more serious: “Hmm… then I think of the families that live in excruciating poverty and partly because of that start quarreling, that you look at their situation and think… they are really stuck. How on earth are they supposed to keep their lives in order? Against politics and policy, you still have to look for concrete solutions. In any case, you always look at the individual situation. If there are two children in a family who are constantly arguing, then perhaps they can go to daycare on different days, so that they are not together all the time and there is some peace in the family again. I then organise those kinds of things together with other partners in the healthcare chain, who also know the ‘social map’ well.” 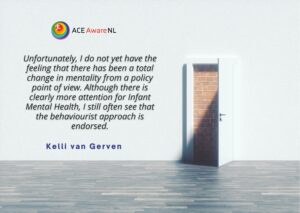 How does Kelli see the biopsychosocial insights embedded in healthcare or in society as a whole?
“Unfortunately, I don’t feel that it is very different now than it was ten years ago. With the help of social media, it is now often easier for parents to find like-minded people or to find professionals with a more holistic view and that can give parents a lot of support. I myself also read along to see what is being discussed on these platforms, but I do not yet have the feeling that there has been a total change in mentality from a policy point of view. Although there is clearly more attention for Infant Mental Health, I still often see that the behaviourist approach is endorsed; that still seems to be ‘main stream’. I do see small undercurrents with more awareness about the impact of toxic stress, but they are small branches that seep through somewhere and I don’t see them becoming waterfalls everywhere.”

We talk about how to deal with what parents indicate on social media, such as: ‘I go to the well-baby clinic, but I don’t listen to what they say there, so in one ear and out the other.’ How can employees deal with that?
“Sometimes parents don’t want to have a consult with certain professionals because they don’t feel heard there. Some parents are more vulnerable than others and are more likely to feel negatively treated, rightly or wrongly. At the same time, the interaction can create conflict for employees: they are trained to properly follow national guidelines, but if the parents want to deviate from these kinds of advice, either for scientific or intuitive reasons, the relationship with the parents can come become strained. We now know that a baby is not a person without feeling, but rather a very sensitive being. If you have crying parents sitting in front of you because their child is crying so much and they have nowhere to go, you want to help find a solution. And that is where friction can arise. We can all happily say that ‘it takes a village to raise a child’, but many parents don’t have a village; they are almost alone. This often leads to a switch from plan A to plan B and to an attempt to ‘adjust’ the baby to the circumstances instead of vice versa. Maybe the parent and the professional are happy then, but the baby is not. Many of the methods used are much ‘easier’ in the sense that you don’t have to change the whole system or get a village around you…” She hesitates, interrupting herself: “Well, easier… I would not be able to, because hormonally I would be driven crazy by the crying…”

Is knowledge about the influence of the social environment on health sufficiently seen, or does the idea that health depends on genes still prevail?
“I do not like the term that we have an individualistic society, but you do see instances of that. For example, I know of a family whose children showed externalising behaviour and this was seen as disruptive at school and at the sports club. The parents were blamed for it: ‘Go and raise your child!’ However, I knew that those parents were doing very well with their children. In such situations it should be possible to surround such a family as a ‘village’, not from the idea of ​‘you are doing it wrong’, but from the question ‘how can I help you?’ People’s lives are often lived separately than together, but I fully realise that is not something you can resolve personally. Political decisions also play a major role in this. This is ingrained in the healthcare system and in the idea that everyone has to stand on their own two feet. Somehow you would hope that parental support would grow organically in a community and that you would not have to set it up as an institution, but that turns out to be difficult in everyday practice.” This topic brings us to the intergenerational aspects of parenting problems. Parents sometimes seem to be individually ‘blamed’ when things do not work out, but in most cases they try really hard and have been through many things themselves, which makes it difficult for them to provide the child with what they need. Does that kind of knowledge seep through to practice, I ask Kelli.

“One of the tasks of the youth health doctor is to refer to the GGZ if more support is deemed necessary. If there is one thing that is difficult to say to parents, it is that you think that not only the child, but also the parents themselves or others within the household need support to solve their problems. However, it is very difficult to raise the issue if parents themselves are not yet aware of certain bottlenecks and there is no request for help. This is especially so because in principle I am the child’s doctor, and not the parent’s. Only when parents learn to see that their own attitude influences the functioning of their child, will things change. That is sometimes really a ‘pink elephant’ in the consulting room and there is certainly progress to be made there…”

We look at the terms ‘toxic stress’ and ‘trauma’ and what you could or should understand by them.
“Trauma is very common, but it is often still thought that the word is about a serious event, such as a difficult birth. That it can also be about more insidious forms, as a result of your attitude towards the child, that is more difficult. That touches people in a more intense way and can feel like failure. I think the same applies to toxic stress. I don’t use that term much, but I did read some work by Jack Shonkoff about it. I think we can imagine what it does to a child to be systematically belittled or beaten or not given food, but I think more subtle forms are more difficult to grasp.” 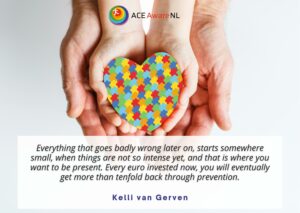 I ask Kelli what, in her opinion, should change with regard to policies in order to work more on prevention of problems.
She thinks and smiles: “Well… if you look at it very utopian way, then of course you would like us to create a society in which children can grow up in an environment that suits them and that guidelines to that end provide state of the art knowledge, and that invasive, heavy interventions are reserved for the few situations in which they are necessary, and are not part of standard documents. A real step needs to be taken there, so that parents receive less conflicting information. But then…” She hesitates, looks at me and grins broadly: “… these are of course monstrously large social issues; you can’t just change that!” We laugh together at her term ‘monstrous’. However, she does see achievable goals: “On a small scale, of course, you hope that you can always give parents something with which they can manage their own situation as well as is possible.”

I notice that Kelli regularly brings up the guidelines and I ask about their influence.
“Well… in principle, those guidelines form the frameworks within which we work. Not everyone can interpret this in their own way. So you want the summary to actually represent the latest insights. This gives professionals the feeling that they are acting responsibly. Therefore, there needs to be more awareness regarding the influence of early childhood and of its nuances. Everything that goes badly wrong later on, starts somewhere small, when things are not so intense yet, and that is where you want to be present. Every euro invested now, you will eventually get more than tenfold back through prevention, but many policies are linked to four-year cycles… so to the short-term, actually.”
Finally, Kelli indicates that her own motherhood has taught her a lot that she experiences as valuable. She hopes to be able to support other parents as well with such a learning process in which the children are a strong motivational force.

We wrap up and I thank Kelli for her time and her beautiful story!