It is beautiful late summer weather when I arrive at my interviewee for today, Simone (pseudonym). I suggested we would start with a game and that sounded good to her. She looks happy when I bring out the elements and explain to her what the intention is. We clear the table so that she has plenty of room to play. The idea is that we gain insight into what her world looked like at a certain age in her childhood. She chooses the age of 13 and gets to work. She can choose a maximum of six of the eight coloured ‘mats’ and associate a place of a person to it, starting with ‘I’. After the mats, there are dolls, houses, roads, means of transport, lucky clovers and emojis. She needs time to get the relationships between them as desired. When she feels she is ready, we start the conversation, during which she will regularly look at the ‘Mats game’ elements laid down and will be amazed to see how they reveal all kinds of interactions in her life as a young girl.

She has had a tough time and has started a search; she no longer wants to avoid the source of her pain. She realises that, like a family member, she may not be able to completely silence the voices of the past, but she doesn’t want to feel the pain all the time, find more peace, learn to better guard her own boundaries, that for years she allowed to be crossed. “Sometimes it may seem like I have an authority allergy, but I don’t actually believe that. I can tolerate authority, but I have a highly developed sense for power abuse. And lately I have become aware that abuse of power triggers me. Partly, I already have more insight into the causes of this. My parents came from a strict Catholic background and considered things normal that I don’t find normal at all, such as the distinction between man and woman, but also the way we were treated as children and how my father tried to deal with certain aspects of his position to impress other, as did the pastor.” I nod and tell about ‘symbolic violence‘, the abuse of power and prestige, and Simone recognises the different elements. They will come up a few more times later in the conversation. During the laying of the game, part of the opening question we always ask has already been answered, namely the question of someone’s background.
“I moved quite often within the northern provinces between the ages of eight and thirteen. Onward from the moval when I was thirteen, I had a really hard time. I came into puberty, lost my best friend and my nice, familiar school, had to part with the dog, who had always been my great friend and for whom, according to my parents, there was no longer room in the new house, and my parents and sister were always working in the shop we had there, so I was almost always home alone. My grandfather died while we were moving. My whole life felt strange to me. I couldn’t find the school. Not even once had my parents cycled the route with me. Luckily I met a classmate on the way who had also just moved there. At school everyone spoke Frisian and I hardly understood anyone. I kind of felt dropped into a totally unfamiliar environment… yes… that move was really traumatising for me. When I think back, I think that is where my chameleon qualities originated: I tried to adapt as quickly as possible so that I could fit in again, but I did not really succeed. I felt like a normal child, but the normal children did not hang out with me, only the children who, for other reasons, did not really belong to the group themselves, felt attracted to me and that, in turn, was something I did not like… Yeah, well… that is how you think at age 13…” She is silent and considers the feeling of that time. “A lot of anger developed during this period. Before that, I sometimes found it difficult at home, but after that move everything got a lot worse.” 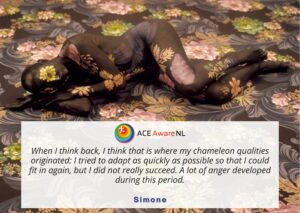 I ask who she could turn to in her early childhood.
“That was my mother. I cannot remember ever having a click with my father. He was there, but I often found him annoying. He didn’t understand me and made that quite clear. He was very authoritarian, while my mother was a sociable person, with whom everyone was always welcome to join in. With her, I could be who I was and I loved being with her. I remember one time sitting on the couch with my doll and asking her: ‘Mommy, can I marry you?’ I was very disappointed when it turned out that was not possible.
My father was always working during the week and on Saturdays; he was home only on Sundays and then he was very papistic and stern and cold. On Sundays, we had to look neat and he checked whether my mother had cleaned the house well enough on Saturday. If he did not think so, he would grab the vacuum cleaner and a bucket and do it all over again.
My mother, in the opinion of my grandmother, her mother, was actually married late. She was 27 and the first years there were no children and my grandmother did not like that. When the GP told my mother at age 35, after a difficult birth with me, that it was better if she had no more children, my father saw me as the ‘guilty’ one: now he, who wanted a successor for his business, had been denied that opportunity. He now had two daughters, while he longed for a son. He later said things like: ‘Yes, you were a heavy, fat kid; because of this, mama could not have any more children.’ He laid that reproach at my feet and always thought I was a bad person; he literally said: ‘I have nothing with her.’ I’ve felt that all my life in how he treated me and how he differentiated between my sister and me.”

How would Simone describe her home environment?
“There was a lot of structure in the house, the famous ‘calm, cleanliness and regularity’, and I grew up very protected. We never went on holiday, so I hardly experienced anything as a child.”
She says that she more or less fled the house when she was 18. She did not want to work in her father’s company, but living in her student room made her feel just as lonely as at home: “I ran into the world and into myself. I was like an unworldly girl in a student house with almost all boys. Their parents called so often that they kept themselves out of reach, but mine never called. My parents had not helped me with anything and I had to do everything on my own and usually had to pay for it myself as well. I was shocked by all kinds of things that I had to deal with and was always on my guard. With such an attitude you do not experiment and you become very cautious.” 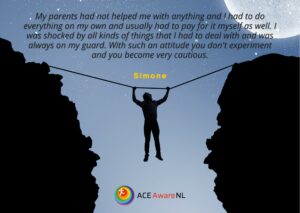 When I ask about the period that contains her best memories, she is very clear: “That was in my birth house, with the garden there and a parasol, children to play with, nicely colouring, baking an egg… the homely, the cosy – I really liked that and I did not feel that way again after I was 8 years old. My mother was also becoming increasingly unhappy and used me to vent. She was treated as an employee by my father, but she was not paid and sometimes could not live on the household money she received. I used to say: ‘That is ridiculous! It cannot be the case that you cannot buy what you need because he does not give you enough, while you are working hard all week, too, now, can it?!’ She thought so too, but then she would say: ‘Yes, but you know what he is like, don’t you?’ I told her to stand up for herself, but she was afraid of him.”

Next week you will read the continuation of the conversation with Simone, in which, among other things, her saddest memories are discussed and how, in her opinion, these have led to a number of habits that weigh on her.