It’s a sunny Wednesday as I walk underneath the tall trees to the main entrance of the health center. My interviewee today, youth healthcare doctor Kelli van Gerven, has a consulting room on the top floor. She is waiting for me and we walk the last part together. It is special to meet again after such a long time. As she makes tea for both of us, we notice that it feels like yesterday that we were talking about our concerns regarding advice about excessive crying. More recently, we have been in touch about a document that did not seem to do justice to children’s need for a deep sense of safety.

I tell Kelli that my colleague and I had a conversation with a healthcare professional earlier today about the first 1000 days and stress in early childhood. A while ago, Kelli was also at a meeting on this topic. Scientific insights into the needs of children in the early stages of life have been greatly expanded in recent decades. Regularly, they appear not to correspond with what is often still being told to parents and the general public in western societies. During the meeting, Kelli noticed that the consequences of this new knowledge for day-to-day practice still met with a lot of resistance from some people. This is understandable, because it demands a lot from professionals when new insights require a change in the usual working methods. It calls for reflection: ‘How have I always done that?’, ‘What have I taught parents?’, ‘How did I approach this in my own family?’ The answers to such questions can be confrontational, because on closer inspection, you may no longer endorse your own previous choices. You may be struck that the new advice clashes with how you always handled things professionally and personally. In addition, a different approach may require knowledge and time that are not available within the current system. 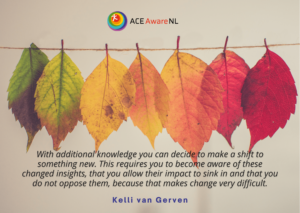 Kelli says: “You may be right to… how should I put it… ‘disapprove’ of your own former course of action… even if that is too strong a word, but with additional knowledge you can decide to make a shift to something new. This requires you to become aware of these changed insights, that you allow their impact to sink in and that you do not oppose them, because that makes change very difficult. Well, of course such changes are certainly not easy. Taking an eye test or weighing a child… that is fairly easy. When it comes to things that are more parenting-related, such as sleeping and crying, it is much more complicated. That is why I always hope that at policy meetings there are not only managers and supervisors present, but also the people who actually do the work with the parents. They can then share their valuable experiences and from there you can look at how changes might be implemented, based on the new evidence.”

We talk about how behind certain things, such as an eye test, there is not so much an ideology or a belief that you can disagree on. “That’s certainly an aspect of it,” says Kelli, “because I myself find that sometimes I get annoyed by the way children are viewed in some documents. If I, as a parent, go somewhere with my child, I expect the care provider to be aware of the latest scientific developments. If I should notice that this is not the case and I receive advice that I do not agree with at all, then that is very difficult. Maybe they don’t match with information I have collected myself and with my own world view. I can understand that in such a case, parents might think: “Why am I going there, to the well-baby clinic?” Such feelings undermine their willingness to take advantage of that care. I think that is something that deserves attention from us as professionals.” I ask how she navigates through those difficult situations. Kelli: “I almost always manage to get on the same page with parents. I slip into the parenting role with them and then it rarely happens that we cannot work things out together. In my experience, finding that common ground is often much more difficult between fellow professionals. For example, I was once at a training about brain development in children and the question was raised whether or not certain forms of damage are reversible, so whether you can undo them. The impression was created that this is always possible. That did not match what I had learned about it, so I kept asking. The speaker then indicated that there are indeed certain processes that become so ‘built-in’ in the brain that they are irreversible, or at least very difficult to reverse. To me, that seems very important information, because it means that we as care providers have to handle such processes very carefully. However, the speaker’s answer led to a lot of angry unrest in the room: how I could have asked that, what I did to parents, that I had gone too far… I noticed that the subject was very triggering for many of those present.
What I missed afterwards was that we all come together to talk about why we are so strongly disturbed by the idea that certain forms of approaching and treating  babies cause damage that is difficult to undo. Those are dynamics that I never really have with parents that way, barring extreme situations and exceptions. The fellow caregivers believed that it is too harsh to say to parents that certain things are harmful, but that wasn’t my point. I agree that care and sensitivity should be at the heart of discussions with parents. In my opinion, this does not alter the fact, however, that we must first establish that some things really are undesirable or even harmful. We need to have that discussion first and then move on from there. Such criticism does not affect me personally, but I hope that with such a question I can contribute to a thinking process that we really have to go through with each other about the underlying principle: the most recent insights are the basis for plan A, the best scenario. If Plan A does not work, sometimes you have to go for plan B and then you make the best of that second-best option. Now it sometimes seems like plan B is the first choice and that if you advocate plan A, you hurt parents or overask them, while I believe that parents have a right to the information of plan A. They have to choose what they want to do and we guide them in doing so.” 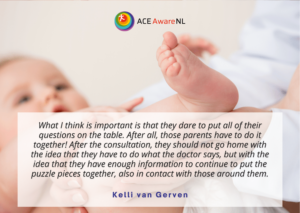 I ask Kelli how parents react when she discusses these topics with them.
“That depends a lot on which parent is sitting in front of me. One thing is always certain: we sit together in that consulting room because everyone wants the best for that child. Often in such a conversation, a question arises from the parents, for example regarding disagreements about where the child sleeps and whether they should learn to sleep alone. Then the goal is for me as a youth doctor to work in accordance with the JGZ guidelines. Parents will be influenced and informed by these guidelines to the extent that information leaflets are made for them on the basis of those guidelines. Parents do not always have the same employee in front of them at the ‘consultatiebureau’ (well-baby clinic). Continuity, therefore, largely comes from applying the guidelines, but not everyone interprets them in the same way. What I do then is that I explain that there are multiple visions and that the choice for how parents want to approach their child is of course always theirs. I explain the basics of what a baby or young child needs and provide additional information. What I think is important is that they dare to put everything on the table that they struggle with or about which they have questions, so that we can discuss it. After all, those parents have to do it together! After the consultation, they should not go home with the idea that they have to do what the doctor says, but with the idea that they have enough information to continue to put the puzzle pieces together, also in contact with others in their social environment. I think those conversations are very nice, because you notice that you have something in common, which is the well-being of the child. When there are concerns about issues such as possible child abuse, that is a different story, but of course that is not the case for the majority of parents. They want to see what is the right thing to do. I enjoy that interaction and because of that, you get a positive exchange with each other. I never say, “This is how we are going to do it”, because it is not about what I want; after all, I am not the one who has to feed the child, change the nappies and carry the responsibility for the daily care, right? These parents should be comfortable in their roles. Guiding that process… that I find really fantastic!”

Next week in Part 2 you will read about the challenges Kelli experiences in contact with parents and with guidelines and the way in which she sees scientific insights embedded in daily practice.