The practice room is well heated; the candles are burning and there are fresh flowers. From the window I see Isis coming and I walk down the stairs to welcome her. It is nice to meet each other now, after a brief telephone exchange. We start our conversation with a short creative check-in and then we lay the Mattenspel to visualise how Isis experienced her own childhood and which relationships were important to her at the age of 16. During the laying, already certain things come up: “I tried to turn it into something cheerful”, is her reaction when I point to the happy smileys that are added to a number of places and people only at a late stage. Later in the conversation we come back to this common need to uphold an image of a happy childhood for the inner and outer world, even if deep down it did not feel that way. When in Isis’ opinion the laying is ready, we look at it extensively together, for example at the anger that lies with father. “I had tricks to make him happy. I knew what to do to avoid punishment. For example, you should not say anything wrong at the table, because if everything was not decent and appropriate enough and you ‘misbehaved’ despite a warning, you were locked up in the warehouse behind the store. Unlike a sister, it never happened to me, but the threat was always in the air. So I kept quiet, or I would hide myself, and I always felt that tension. Sometimes I got grounded when I was caught lying. We were not seen for who we were and I did all kinds of things to get attention, such as stealing things from my parents’ store, or money from my mother’s wallet. I confessed to her about that not so long ago and although she didn’t want to believe it, she finally accepted my refund. Things were not easy with her either, but as a child I still felt relatively safe with her; she was more of a stable factor in our family, although at times I felt more comfortable with my father’s greater light-heartedness and acting silly.” 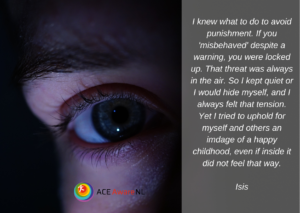 Isis tells how she sought refuge outside of the family with friends, how she skipped school and did wild things. She started a relationship with one friend, but at his home the situation was almost as difficult: unrest, tension between the parents, a rude father… the dynamics were familiar. They broke up, later reunited and married when Isis turned out to be pregnant. After a miscarriage, three children were eventually born, but the marriage did not last and resulted in a fighting divorce, which had a major impact on the partners and the children. When, during our conversation, we look in more detail at the situation of Isis, whose father died young, and that of her own family, in which the children lost their home base at a young age, there are striking similarities.

The reason Isis visits me is actually that her middle child, 30-year-old Robin, is not getting their own life in order. After an improvement last year, when Robin returned to live with Isis in an attempt to develop more structure, there is now a relapse. Isis is sad and fears to lose the connection with Robin, also because she feels overwhelmed by everything that is evoked in herself by the unrest. “You could put the pictures on top of each other and you see that there are many overlaps in what happens in our lives. Robin and I both left home at a young age and fled into going out and addictions.” We speak about the different forms of addiction out there that are much more than just drugs or alcohol. Also always being rushed, constantly working, demanding attention in a negative way… these are all behaviours based on a deep desire to numb feelings of pain and loneliness and create the conviction that you belong, that you are being seen and heard. They are helpful in the short term, but cause damage in the long term and you can hardly let go of them. The fact that Robin does have contact with father makes it emotionally extra complicated for Isis, who is very busy pondering what her own role can be for Robin, what is needed to experience connection again. We talk about what happened when the lucky clovers were placed in the Mattenspel; several people already had clovers, but not yet with Isis herself and she had asked, while looking at me: “I can also put clovers with myself, I guess…?” I had replied that that was totally up to her. Her response was: “Hmmm…yeah…I’m kind of forgetting myself…” I mention that later in our conversation and Isis indicates that she herself had been aware of it, too. Now that I explicitly ask about it, she says that it is a familiar theme in her life, that she tries to do things right for the other person, but does not often ask the question whether those choices are also good for her. We speak of authenticity in that context and Isis says: “No, my authenticity does not hold up well in all of that; I realise that and lately I have been working on that somewhat more. I just find it difficult to distance myself and guard my own boundaries, because people crossed them so often when I was a child. I keep asking myself: ‘Was it good enough? Couldn’t I have done more?’ So complex, all of this…”

We are quiet together for a while; I pour another cup of tea and I ask her how she feels right now. She thinks; her eyes fill with tears as she responds: “I feel sorrow; I wonder… how does all this relate to my relationship with Robin? I experience that sometimes I just feel so lost, that I don’t know what to do anymore. Robin did try things during the divorce to bring us back together, but the meeting with my ex and me Robin once organised unannounced was intense. I felt manipulated.” She is aware of Robin’s almost certainly good intentions, but it still didn’t work out. I look at her and feel her inner struggle. Manipulation… I’m reminded of another interviewee who used that word about herself and we went into more detail about it. We found that it was a term that reflected the pain of the past, which was about how she was treated by her parents, after which she came to believe in that mantra. To what extent was Isis manipulated as a child and did Robin’s action trigger the pain that had previously been caused? I ask Isis when she first felt manipulated. She mentions her marriage, but if we look further, it was already present in her home situation, where relatives said they did not feel like listening to Isis. “They still say that and then a very deep pain comes up in me; I feel sadness and anger.” 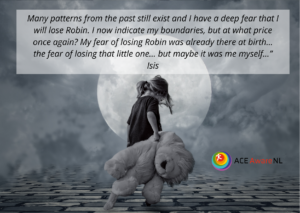 We talk about her earlier statement of the ‘relative safety’ that she felt with her mother. “I knew it wasn’t the way it was supposed to be, but I settled for it. I had no choice and had the feeling that I had to deal with this and that they did not know and could not do any better. Since then, I have achieved quite a few things in life and then it may be tempting to explain everything away and downplay everything again, but…” She falls silent and the tears flow again: “Many patterns from the past still exist and I have a deep fear that I will lose Robin. I now indicate my boundaries, but at what price once again? My fear of losing Robin was already there at birth… the fear of losing that little one… but maybe it was me myself…”
We are silent together, deeply moved, because she now almost literally says what she means, what she feels as a result of what has happened, namely that she has lost herself in the course of her life. She now sees that reflected in her child and that hurts intensely.

Next week we will analyse some of the points Isis raised.