My client and I had gotten in touch through an unusual route. I had spoken about my work with someone and that person reached out to me a couple of days later, asking: “Do you do consultations on this trauma topic, aside from your lactation work? I know someone who is struggling with an adult child that has addiction relapses and they are not on speaking terms right now. Both parent and child have a difficult time dealing with all the pain of the disrupted relationship and maybe your knowledge and insights could help them to get things moving again, if only a little bit. The child seemed to have made progress last year, but things have taken a worrying turn for the worse now.” My response had been that I can certainly be approached for this work, although I do not pretend to be a therapist. Then again… as humans, we don’t need to be a therapist to have a therapeutic effect on processes our fellow humans go through. Offering our time and true presence can already be so soothing.

I had felt confident that my knowledge might be of help and explained that such a conversation would have as its goal to figure out what childhood was like for that person, either parent or child. I have a game that is helpful to that end and although it was developed to be used with children, it can also be used with adults. You will then have to ask the adult to pick an age for which they would like to lay the elements of the game. I had said that if I would see the 30 year old child (let’s call them Robin), it would be advisable to have some follow-up care available, because a session with me might bring up triggering and intense memories and emotions. 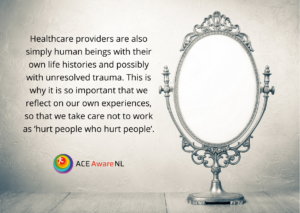 We had decided that my acquaintance would inform the parent that I could be contacted and while talking a bit further, still, we had discussed Robin’s negative experiences with healthcare providers, which is always a sad thing. We all may come into situations that need specialised care, but if previous experiences with healthcare settings were upsetting or even (re)traumatising, then they can lead to the client or patient to evade care, even though it is really needed. At the same time, it is important to be aware that healthcare providers are also simply human beings with their own life histories and possibly with unresolved trauma. This is why it is so important that we reflect on our own experiences, so that we take care not to work as ‘hurt people who hurt people’.
In my own consultations with clients, I always focus on their autonomy. There is nothing in what I say that they should do; I give them information after trying to support them in accessing their inner wisdom and when we wrap up and say goodbye, it is fully up to them to what extent they decide to apply what I offered them. (Oh, there is one must after all… payment of the bill… 😉)

I had asked my acquaintance whether parent and child were both ready to reflect on their own role in the relationship, because children may bring up tough stuff, experiences that are hard to hear for the parent. Maybe the parent did not know about something or maybe the parent knew at a deep level, but was too scared themselves to dive further into it. It turned out that the parent, like other family members, was about to give up. When parents find it difficult to look at their own part in the dynamics, it is often also very hard to cause breakthroughs and it seems that this parent had trouble finding the courage. My acquaintance had brought in the aspect that when something is ‘your own fault’, it is also something that you can change. My reply had been that I do not speak in this terminology of ‘guilt’, because most of the time, it is not very helpful. There is a fundamental difference between ‘guilt’ and ‘cause’. You can be the cause of something, without carrying reproachable guilt for it. That is the essence of working in a trauma-sensitive way, being aware that trauma is mostly intergenerational and that everyone has most likely done their utmost within the personal and circumstantial options available to them. That is a crucial realisation. Then again, the child can live with the perception that the cause of their problems lies with the parents. And we must also appreciate how hard it can be for parents to keep faith and constantly rekindle courage to be there for the child if relapses happen over and over again. As hard as it may be, however, if the parents do not work on their own healing, chances are that they diminish or at least complicate the healing potential of the child. For the child, the only option that remains may be to release themselves from the parental influence to completely work on their own healing, hopefully with support from close and cherished others.

During our conversation, new information had come up about the parents of the parent, so quite quickly we had come to the conclusion that, once again, there seemed to be intergenerational pain that gets handed down, without anyone intentionally aiming to do so.
We had agreed that it might be an empowering step for the parent to get in touch with me, seeing the difficult communication with Robin right now. At the moment, Robin was pictured as playing the victim role, partly by posting embarrassing stuff on Instagram and thus causing turmoil among other family members and friends. Guesses were that Robin had been under the influence of drugs while doing so, although Robin had appeared to be clean in the previous year.  I had said that both parent and Robin were welcome and that I hoped that the parent might be able to also encourage Robin to come, even if their own consultation with me might turn out to be difficult and triggering grief.

That was where we had left off. It only took a day for the parent to call me – how brave! We talked a bit, I explained a bit, they illustrated a bit… we got a feel of one another and ended our phone call by setting a date for the week after. I was touched by the courage shown and the confidence given. I decided I would prepare well and make sure I would be able to offer my full and attentive presence.

Next week, we will see how the conversation with the parent unfolded.