This week, we start with a series on the lived experience of ACEs. We share with you a number of blogs based on an interview with Elizabeth (pseudonym). In the conversation we had with her, she was beautifully brave and open and we are honoured being allowed to share with our audience the insights she gained over the years and spoke about to us. Stay tuned in the weeks ahead!

When the memory of childhood seems to be lost

A lot of rain was expected for today, but by the time we leave the railway station on our bikes, it is dry. We cross town with a phone at hand so the GPS can lead us to her place. Elizabeth had shared that she was very happy with how things had been changing in her life over the last year. She enthusiastically spoke about the new, nicer and much more affordable apartment she and her partner had found, how she finally had a residency permit to stay and work in the Netherlands for the next five years, and how she landed a job at a charity foundation in a very international team. “Everything I was so stressed and bitter about has been resolved and I feel overwhelming joy!”, she had said. Nevertheless, she was still very aware of what had been so difficult for her before. Now that she finally had more mental space, she had decided she wanted to see a psychologist and deal with the issues from her early years, to plough through ‘all the shit that came up’, as she called it: “I will now finally make it a priority to heal from the past!” About a year before, we had been discussing John Bowlby’s work and after borrowing two titles from someone, she decided to buy them for herself, as she wanted to dive into it more deeply. Our invitation to interview her seemed to fit well with that goal and we do not exclude the possibility for the meeting to become intense.

We ring the bell and through the intercom system she says she is coming down. As she opens the door, all three of us break out in a big smile. How nice to meet again, after such a long time! We exchange greetings and she leads the way up. One flight, a second one, a steep climb along white painted walls and a white, nicely carved wooden flight of stairs. At the top, she unlocks the door to yet a third flight and then we are in their cosy apartment, where daylight floods in from both sides. The place has a comfortable couch in one corner, facing a large TV-screen, a round table with four chairs in the other, plants in several places, a study corner on the opposite end of the room, the kitchen in between, pans and utensils on a long sink with its wall along the stairs where we have come up, little magnet boxes with spices on the fridge, different tea flavours on the side of it, a bedroom with a multicoloured, flowery duvet cover, and an oil burner with a lit candle in the bathroom. Clearly, they have made a home for themselves and it is good to see her bright and shining with a new haircut. She makes us tea and coffee and after catching up on what we have been up to, we start the interview, explaining to her that we do have some questions prepared, but jokingly add that the interview will be more ‘semi’ than ‘structured’. We all laugh at the familiarity of the terminology. We say that she can take the questions wherever she wants. She can go as deep or stay as shallow as she feels okay with. She nods and seems eager to start. Straight from the first question, about what she can remember from her early childhood and what period seems particularly relevant, Elizabeth touches on aspects of childhood trauma that are very characteristic. She ponders and replies: “After your invitation to be interviewed, I realised that I really do not remember pretty much anything from it. I really don’t remember.” She confirms our remark that this, in and of itself, is interesting: “Yeah, and it’s funny because my sister for example has this razor-sharp memory of things where she’d be like ‘do you remember when we did this and this…?’, and I’m like ‘nope…’ It made me feel a bit weird, a bit uncomfortable, especially because a lot of people you talk to have these memories and experiences from when they were very little, and for me it’s almost like it’s not even there, like it’s erased… It’s uncomfortable, but it’s not like it’s disturbing me. It’s kind of ‘it is what it is’.”

Even though the lack of memories may not feel too disturbing for Elizabeth, her experience is worth taking a closer look at. Science tells us that when we feel unsafe and our stress levels rise, we enter one of several possible survival modes: fight, flight, freeze, or fawn (the tendency to please or placate our ‘adversary’). Our hormonal state becomes such that we are fully alert and ready to escape the danger that we feel threatens us. This brings us into a ‘safe mode’, where our evolutionarily older primal brain (mainly responsible for the more basic functions) takes over, and our evolutionarily newer neocortex brain (mainly responsible for the more complex and analytic functions) is no longer in the driver’s seat. The fact that in stressed situations we are focussed on survival and finding security again, causes our brain to stop processing memories equally well as when we are in a non-stressed safe state, in which we can dedicate attention to and integrate our surroundings. If this state continues for weeks, months or years, entering the realm of (chronic) ‘toxic stress’, the short-term memory loss can indeed become a generalized state of prolonged ‘amnesia’. Naturally, we can never know for sure if this was the case for Elizabeth, but this is a common scenario that does not seem to be too far-fetched given her story.

There is enough that Elizabeth does know and remember though. She is the oldest of three and her family moved to a different area before her first birthday. Less than a year later, she moved again and then grew up in a suburb of a big city, a place where by and large families were all white, all pretty well off, all having 2-3 kids, and all enjoying a garden with a fence and a lawn. “A place like that is so grossly stereotypical”, she says, as she shakes her head and rolls her eyes; “it was very homogenous and Christian, I had no black friends and I really felt like growing up in a bubble.” When asked about when she realised that she was living in this bubble, she says that she recognised it once she was a teenager: “As a kid, I didn’t know anything of course. Part of the reason why I moved continents when I was 18 was that I knew ‘there is more out there’. There just had to be more than what I was used to. I was curious what the actual world looked like, and not only this tiny corner, where most of my friends had wealthy parents (mine included), big houses, vacations abroad, you name it. The schools there are publicly funded from the surrounding property tax, which means that if you have a wealthy neighbourhood, your school is going to be well funded, as ours was; we had courses on becoming a pilot or a glider with trips out to the airfield and all that stuff; it was insane!” 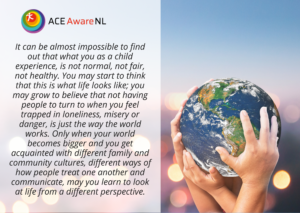 This is also interesting and worthy of some further discussion. Part of what the original ACEs-study by Anda and Felitti from 1998 showed, was that ACEs are not just common among economically deprived, disadvantaged or minority communities. They also show up in well-educated settings, in groups of people that are well-off financially and enjoy a high socioeconomic status, but are emotionally or interpersonally deprived or lack a sense of belonging. It can leave us devastated, this feeling of not being part of a loving tribe, of a group of people who ‘get us’, who hear and see and love us, not despite our idiosyncrasies, but rather because of our authenticity. Humans are wired for connection and if it’s not there, we have a hard time thriving. Most of us, however, consider the setting we grow up in to be ‘normal’, because it is all that we have and all that we know.

It can be almost impossible to find out that what you as a child experience, is not normal, not fair, not healthy. You live with what you are used to and what you are ‘fed’ with from an early age. This can be a very sad situation, because these early experiences will, to quite an extent, shape your views and convictions. You may start to think that this is what life looks like; you may grow to believe that not having people to turn to when you feel trapped in loneliness, misery or danger, is just the way the world works. The shame that comes with this sense of always being ‘not enough’, this feeling of unworthiness, can make you hide away, back off, tune out, instead of connecting with responsive others. Only when your world becomes bigger and you get acquainted with different family and community cultures, different ways of how people treat one another, different styles of communication, may you learn to look at life from a different perspective. Sometimes this happens at a fairly young age, sometimes it only happens much later, which means you may also need a much longer time to heal.

Next time, we will learn more about how Elizabeth experienced the world she grew up in.