Last week, we made a start by exploring Elizabeth’s childhood, the things she could remember clearly and the things that seemed to have somehow disappeared.
We continue by diving into her really early years and ask whether there is a certain vibe she can remember from around that time. She sits and thinks… In the background, the sound of seagulls flying over the balcony laces the scene. She then mentions playing violin at the age of 3 or 4, the ebbing and flowing relationship with her sister, and rather detailed memories from Church. “A lot of my really close friends when I was young are from the Church. I have memories of playing outside the Church in this huge cornfield, or going to Jesus camp in the summers, and things like that.”

“Was there something of a real community feeling?”

She agrees: “Yeah, definitely a community feeling. It’s weird, isn’t it? I was super, mega religious until I was about 16. A large part of my youth I was really into the Church, the evangelical branch. I was studying the Bible, doing workshops, and going to camps. There was also an aspect of shaming and control, though. I remember very clearly, I was about 10 – you weren’t allowed to wear shorts above your knee, right, or sleeves above your shoulder, or mobile phones on site. One day, I had shorts that came right above the knee, and the camp director took me aside and gave me a lecture on how that was inappropriate and told me to change clothes. I was so embarrassed… There was definitely an element of shaming and blaming, and very strict rules that we had to adhere to.
Nevertheless, there was also a lot of fun during the camps and with all my friends being in this community, I felt a true sense of belonging. It almost feels like the quintessential part of me growing up was at this camp: the first boy I had a crush on, I got my first period there (a big milestone for me), I got baptised at that camp – just really big life events happened at Jesus camp over the summers. So, I had a big attachment to it; it was such a big part of my life, which is probably why it took me until 16-17 to leave it.”
When asked what happened at that age when she left, she says it was not a defining point, but more of a gradual process with reading and thinking and starting to question the traditional views of her parents and community, for example on homosexuality and religion. 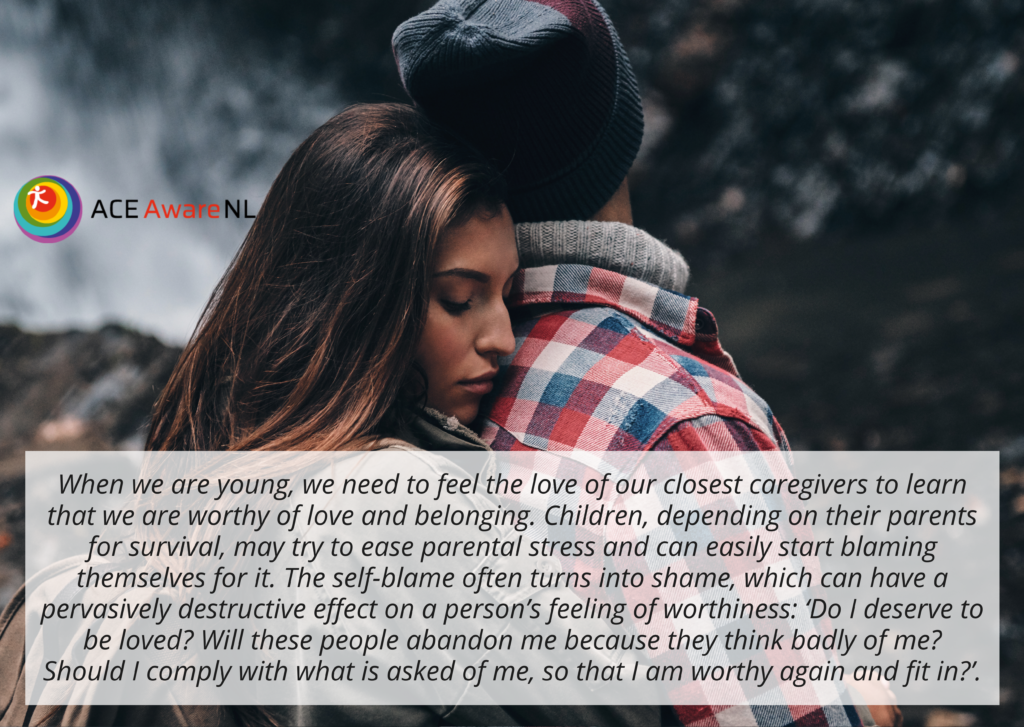 “One of the few memories I have from when I was around 5 – I would take the stereotypical yellow American bus to school every day, right, and I was sitting next to this girl named Zoe, and Zoe told me one day (after she found out that I was as Christian as one can be at that age) that ‘God isn’t real’. And I was like… ‘What do you mean, God isn’t real?’ This was the first time I heard such a thing. So, I went to my mom and asked: ‘Mom, is God real?’ She got so angry: ‘How dare you, asking this question! Of course God is real, you should be ashamed!’ I remember that I was just looking for some comfort, you know, like: ‘Let’s talk about this and discuss, why are you asking this’… that sort of conversation. It wasn’t that at all; my mom showed no curiosity in my questions. Then I thought: ‘Of course she’s right, how could I be asking that…’ But if I still remember that now so vividly, it obviously affected me more than I thought.” She continues: “I was a really smart kid asking all types of questions about the world and seeing different ideologies around me. That got me more and more curious about other things and when I turned 18 I decided to leave home and Church.”

In these previous paragraphs, Elizabeth has mentioned the word ‘shame’ several times. Shame is a very difficult concept to deal with, both for those who experience it and for those who research and try to explain it, because it is a very complicated emotion with many sociocultural aspects. When we are young, we need to feel the love of our closest caregivers to develop a sense of selfworth, to learn that we are worthy of love and belonging. Stressed and struggling parents radiate an energy that is picked up by their children, who, dependent as they are on their parents for survival, try to ease the parental pain and can easily start blaming themselves for it. The self-blame often turns into shame, which can have a pervasively destructive effect on a person’s feeling of worthiness: ‘Do I deserve to be loved? Will these people abandon me because they think badly of me? Should I comply with what is asked of me, so that I am worthy again and fit in?’
Such considerations instill a deep sense of fear and can move people into a constant stress mode in which all kinds of defense mechanisms are activated. As humans, we crave meaningful connection to others, in which we can be ourselves, and if we cannot get that from those in our social environment, we look for other sources of comfort and ways to numb the feeling of loneliness and lack of belonging (which is where addictions and other unhealthy behaviors lurk).
In her book ‘Daring Greatly’, social scientist Brené Brown speaks about how ‘fitting in’ is the exact opposite of ‘belonging’. Aiming to fit in often means that you assess a situation and try to meet the standards of the group; they accept you *despite* your authenticity, as long as you ‘behave’. Belonging means that people accept you *because of* your authenticity; you don’t have to change who you are – you only have to be who you are. Elizabeth gives a couple of examples where fitting in with the standards of others made her feel uncomfortable. It somehow created a disconnection from the self that took her years to identify; she actually says she is still in the middle of reconnecting to her authentic self. Following up on the talk with her mom about religion, we speak about other situations where she was looking for comfort and about who could provide that for her. “I think my dad and my sister were the ones. My dad… he’s very quiet, very non-confrontational. Then again… I hated him, too, eventually, because he would never stick out for me and my sister; he was always on mom’s side. But, at the same time, he was a very kind and gentle person, so if I would be really upset he would be the one I would go to. Still, this was not in terms of things like ‘I am struggling with my worldview and I need help…’ I would not go with that to my dad either. Yeah, when looking back I feel that there really was this gap of having someone older to go to for advice, or comfort. That part of the parental experience was missing for me; there was no one to always know that I could count on, no constant…” We wonder if it was a lack of a continuous attachment figure and she says: “Yeah, exactly. You switch teachers every year, you move away; there are people you couldn’t really talk to because they were friends of my mom from Church, and so on. Even now, I feel the same. Especially since I’m going through other life milestones like getting my first job now, I would like to be able to talk to my mom about these huge steps and tell her how I feel, but that’s not really there.”
This feeling of lacking trusted figures can thus continue into adulthood; the experience becomes a continuity throughout life. For Elizabeth, this loneliness made childhood difficult and keeps making adulthood complex.

The question comes up whether that lack of connection only has to do with the religious aspects. Elizabeth says her mother became a Christian after her parents started dating at university. Her father grew up with the Church, but her mom only joined later and was then very committed. “I think my mom was looking for meaning in her own life, because she had a terrible, terrible relationship with her parents. When I was four years old, something happened during a visit to my grandparents. My mom walked out and we never went to them again. I was 12 when grandma died, but we did not go to her funeral. It wasn’t even discussed; I had no emotional attachment to her and didn’t miss her when she died. Around that time, when I was already in Europe, I found out that my mom wrote a blog and in it, she pictures her last visit to my grandma, her mom, after not having seen her for years. Apparently, a conversation took place in which my grandma told my mom: ‘I’m so disappointed in you, you’re such a failure in life’, and then she died… I was really shocked, reading that.” We touch on how, regardless of whether these were the actual words, the fact is that this is how it landed with her mother: “So… fully true or not.. that’s how it made her feel, right? This is what she internalised. I completely understand that my issues with my mom growing up fully stem from the issues she had with her mom. We never really talked about it, however, and I would have no clue how I could possibly bring it up, knowing how sensitive it is for her. Sometimes I feel I’m exaggerating the whole thing, but I have started realising that the way it affects me now, shows how relevant this was and how valid my repulsion.” 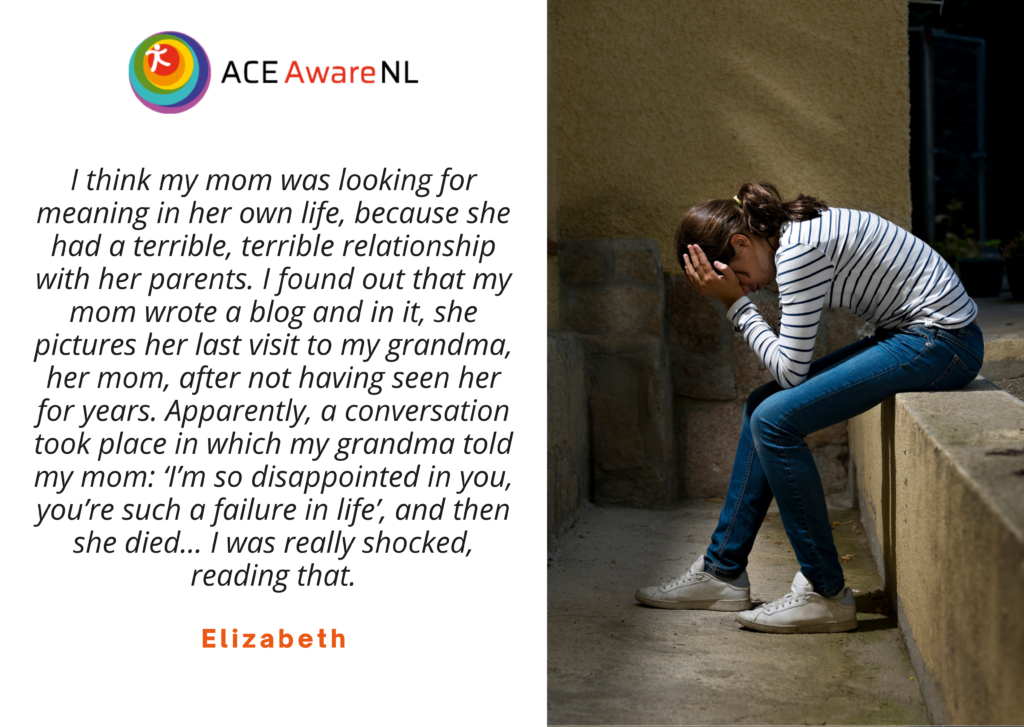 In these sad lines, we hear Elizabeth elaborate on what are the intergenerational effects of trauma. Her mom has clearly suffered from a very difficult relationship with her own mother, and in hindsight, Elizabeth can see how this impacted the way her mom raised her and her sisters. Seeing a link between your own childhood and that of your parents is already an important discovery to make, one that can serve as a step towards a better understanding of where relational and other issues could originate.

The question of how to address this is very important. In all situations where trauma is present and where shame and blame often play an important role, it can be helpful to find out about the undercurrents, the topics that are not discussed, but are nevertheless present and negatively influence the relationships within a family, a community, a whole culture, even. These undercurrents can sometimes be made visible by a non-invasive approach in which the central question is ‘What happened to you? What is your story?’ If we can provide an environment with holding space, in which we listen wholeheartedly and without judgment and if we can practice what is called ‘compassionate inquiry’, people can maybe find the courage to tell their story, to look at their own life history with new and more compassionate eyes. This can have a very healing effect on everyone involved.

Next week, we will take an even closer look at the family atmosphere in Elizabeth’s home.