Last week, we spoke in detail about the diverse aspects that Henriëtte sees as the essence of her work. Inextricably connected to that, for her, is the importance of a childhood during which babies and young children can be gracefully little and playful on the one hand and in which, on the other hand, not all things hard and complicated are kept away from them. As we have learned, experiencing and understanding intense events will prepare you for what life has to bring. “I regularly notice that ill family members, for example, are hardly or not at all talked about, about what their illness means for all involved. There can be a lot of grief in life and I often think: ‘Go ahead, deal with it!’ Do not allow children to give these things a wide berth, but let them go straight through it, obviously with the support of a stable adult. You don’t have to be rich or highly educated to do this, as long as everything can have a place. Sometimes it seems as if everything in our society has to go well. I speak with people who are mourning and they say that in our present-day communities they have no place to go to with their sorrow. After three months, they say, you just have to get back to ‘business as usual’ and I recognise that – supposedly, things are only allowed to go well for us.”
I ask her whether she thinks that the concept of ‘toxic positivity’ plays a role here. This is a form of excessive positivity that minimises or invalidates authentic and tough emotional experiences of others.
Henriëtte: “Yes, I think that we often make things seem too positive; maybe everything around the lockdown is interesting seen in that context. Now, it feels very legitimate to say you are not doing so well or that things are hard on you.” 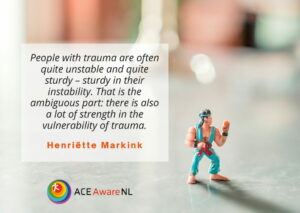 Related to this, we speak about toxic stress, a resulting form of chronic stress. She speaks about how she uses the work of Peter Levine to address this stress through bodily exercises and how she has started to read in Stephen Porges’ book on the polyvagal theory: “A client of mine spoke about that, and is very excited about the fact that we now do exercises based on that theory.” The polyvagal theory explains how important our sense of true safety is for the parasympathetic part of our autonomous nervous system. “When I explain to people that the effects they feel due to their lack of security are purely biological, they are often very relieved. Many keep hearing from others that they are strange or that they do everything wrong, if they do not succeed in going through life with more peace of mind.”

We return to a little detour we made before about the influence of survival strategies from childhood, how they can be effective initially to keep it together, but become disruptive and sometimes even self-destructive in the longer run: because of psychological trauma or ACEs, people often lose the connection to themselves and experience a deep division within themselves. I mention the idea of loss of authenticity following the lost connection to self. “Hmmm… I don’t know about that… in my experience, many of the people I see really rather have their own character, but they are often quite unstable ánd quite sturdy, sturdy in their instability. That is the ambiguous part: there is also a lot of strength in the vulnerability of trauma. People can be so lost to themselves… they get all tangled up in their history and no longer know where their roots are, where they come from. Everything that happened, has become one big knot that together we then try to unravel.”

I listen carefully and somehow get the feeling that regarding ‘authenticity’ we are having two different conversations. I explain that in this context, trauma expert Gabor Maté speaks about the coherence between the innate urge to connect with others on the one hand and the need for self-expression on the other: attachment versus authenticity . His position is that if a child has the feeling that their unique personality can not be shown, because one way or another it does not fit with what is comfortable for the parents, that uniqueness will lose out in favour of the attachment relationship. After all, a child cannot survive without the parents, so there only seems to be one way out: suppress the authenticity and be seen a little less (as discussed last week),  be less enthusiastic, dedicate less attention to personal interests or development… anything to make sure that the attachment relationship is not (further) disturbed. Her face lights up: “Aaaah, yes! Explained that way, I see what you mean! That also explains the loyalty to parents after incest experiences, for example… at least you remain attached somehow that way. Wow, this is beautiful!” I recognise her eagerness, as I had a similar feeling when I read about the importance of prosocial behaviour as described by anthropologist Sarah Blaffer Hrdy. As humans, we are so wired for connection and attachment that we do not passively wait for it to happen, but that already as babies we actively seek out contact: the nicer people think we are, the bigger our chances for survival.
Therefore, Blaffer says, like Frans de Waal and Rutger Bregman (two authors on empathy research), that the idea of innate egotism is a myth. The problem is, however, that it is truly very hard to remain prosocial if you are on guard the whole time due to the experience that sooner or later, you will be ‘spit out’ again, as we also discussed last week. The sympathetic (‘fight-or-flight’) system will then take the upper hand at the expense of the normal functioning of the parasympathetic (‘tend-and-befriend’ or ‘calm-and-connect’) system that calms us down again. The last two, with the oxytocin hormone as one of the leading actors, are under severe pressure these days, because many people experience only a minimal amount of positive social interaction. Thus, levels of stress hormones remain higher, with short tempers and lack of patience as a consequence. Clearly, positive interaction is also crucial in childhood. Sometimes a child has to turn down their authenticity; a child cannot get away from the family system (without severe repercussions) and can only try to make the best of life within that constellation. If you have to become a little ‘invisible’ to earn your mother’s love, then that may seem the best way to survive. After the first 1000 days, such behaviour can already be strongly internalised – a very sad situation with great impact in the long term.

Henriëtte has been listening closely: “Really, this is terrific. This is something I can explain to my clients; then we are back more or less, with the psychoeducation we discussed before. Really, I think this is going to be the future, much more attention for the parasympathetic system: how can we activate that part of the nervous system and what do we need to achieve that? That also includes lifestyle and doing things you really like. I started a vegetable garden, for example, and with it, I have already been able to inspire several of my clients: they get a lot of energy from having their own!” 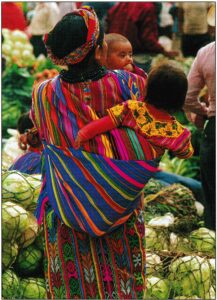 We laugh out loud together when I say that her remark reminds me of something again: “Not another book, no?!” It is such a treasure to see how we mutually provoke further thoughts and ideas. This time, the concept of ‘salutogenesis’ comes up. This approach asks about the origins of health, leading to very different follow-up steps than western medicine’s more common ‘pathogenesis’ (the questions about the origins of disease). Salutogenesis is prospective (looking ahead – how can we maintain this?) and proactive (what does one need to stay healthy?) and searching from trust and confidence towards the good things in life. Pathogenesis is more retrospective (looking back – how did this problem arise?) and reactive (what can we do to solve the problem?) and working from avoidance (of risk factors). The founder of the concept, Aaron Antonovsky, described it like this: ‘Pathogenesis sees life as a river full of risks that you should not end up in. This view focuses on prevention (do not fall in) and treatment (do not drown, we will save you). Salutogenesis says that all of us are always in that river, because in life, anything can happen to us at any time. What to do…? Learn to swim!’

Henriëtte smiles enthusiastically: “If you would ask me now what the essence of my work is, I would say: learn to swim together… and sometimes maybe to be a cheerleader on the shore, to encourage the swimmers!” Many people can do with some positive encouragement, she says. “Many people are so lonely; there is a lot of pain and people often are very accusatory and punitive towards themselves. Often, they had a difficult place or role within their family of origin and often they suffer from disorders and complaints that make you wonder: ‘If only one person would have taken a close look at this story, it would have been clear that this is not normal and that there must be much more behind it. Temporary blindness, a sudden stutter, behaviour like pulling plants from their pots… we cannot keep looking away from things like that only because we do not know how to handle them. We have to study them much more closely. That also leads to the question: ‘How to approach parents who have given you the impression that they are not creating a secure base for their children to grow up in?’ That is difficult, because there, too, a punitive approach is probably not going to do any good. I ask which policy changes she considers necessary and where she sees opportunities to create them. “I think that the increased attention for psychotrauma is a positive point. Finally, it can be mentioned. I am well aware that I may be in my own bubble when I think there is no way to escape books and tv programmes that deal with this topic and that all of it is already obvious to everyone… it is probably not yet completely obvious, but I really do see progress. There is a lot of knowledge to share, but I feel I am also never done with knowledge collection, as there is always so much left to learn! I remain curious, for more knowledge, but also towards the people I see. In listening to them, it is all about pure attention. And the most important is to give that attention without judgment. People are often very judgmental towards themselves and if you as a professional don’t judge, they can have a more compassionate and less judgmental look at their own history and learn to understand it.”

By now, a few weeks have passed. Through e-mail and telephone, we have been in touch about the blog texts and we both look back at our conversation with great delight. Shortly, I will visit Henriëtte and interview a colleague of hers for still more fascinating stories!
A few days after Henriëtte’s visit, Stephen Porges’ book was on my table, a tip she gave and one of the titles that had been on my reading list for a long time. I have started reading it by now and will dedicate a blog to it in the near future!