Last week, we discussed Henriëtte Markink’s start of her work with people with trauma. Today, we travel on with her, on our way to more ‘value-ful’ insights of her discovery journey.

I ask about her workplace and she tells how, as a nurse practitioner/trauma therapist, she presently works in a small organisation for mental health. “In the smaller practice where I work right now, we strive for short communication lines and also for short waiting lists. Someone who had had to wait for a long time once said to me: ‘I had a terrible winter. I could easily have been dead.’ That person was very angry with me, and I understood that, even though I had done my utmost to get that client their turn as soon as possible.”
I look at her and try to read her body language. “It sounds as if for you, there is an ethical component to those waiting lists…?”
She nods with a fierce look on her face: “The waiting lists for psychotrauma treatment, sometimes up to three quarters of a year, are really a big and nation-wide problem and I most certainly consider that an ethical issue. I do suspect, however, that behind those waiting lists, there is a political game related to health insurers and their conditions towards health ‘buyers’ [organisations that contract health care – the way this works in the Netherlands], but I do not know enough about that, so I’d better not venture an opinion on that.”
She holds her hands alongside her face in a gesture of wearing blinders: “At a certain point, I decided to maintain a proper distance from all those political and policy issues, to no longer get all frustrated about them, and to only work from a patient-oriented perspective.”

This brings us to the essence of her work; I explicitly ask how she would define it. “The essence of my work…” She looks thoughtful and thinks in silence for a bit. “Yes, that I find a tough question… there are many things that come to mind… Of great importance in working with people with childhood trauma is to give them hope, to deguiltify them, to give them the space they themselves do not take up… but in the end, the essence is careful listening, because people have a chronic need to be heard and seen. That applies to everyone, of course, but if you have been ‘pulled from the clay’ [as the Dutch saying goes] in a nice way, if you have been raised well, there will not be this incessant need in adulthood to be both seen and not seen at the same time.”

We continue to talk about ‘not wanting to be seen’: “This morning, I had an online group treatment session with a colleague and we asked everyone to stand still and pay attention to how they felt, how things were right now. For many, this was very confronting. Some said: ‘I want to LEAVE!’ Someone else said: ‘This was a HORRIBLE hour!’ This person hardly made it through.” I ask how that was visible, now that so much has to be done with the help of computer screens. Henriëtte breaks open in a big smile: “Oh, that was very clear!” She turns her head and averts her eyes, looks at the ceiling, to the left, to the right, at her shoes: “This person was constantly looking around and it was very clear that the theme we discussed, was a topic to be avoided. That is very hard to notice, because finally there is a group where people do listen, but then this person cannot find the courage to be heard, because they failed to be heard all throughout their lives. These people are so hit and hurt and harmed by all that happened to them, that the confrontation with their pain in a loving, attentive environment is almost too much for them. That is why I always strive to listen to people with compassion and without judgment. You have to teach them to feel that they really deserve to be heard. So often, these people have not been listened to in the most dreadful ways…”

We get to the question of how trauma is defined in her work environment. She indicates that they stick with the description of the DSM-5, the Diagnostic and Statistical Manual of Mental Disorders. For PTSS, this comprises among other issues sexual abuse, physical abuse, witnessing a sudden death, and their effects, such as nightmares, avoidance and mood swings. She differentiates between situations where a person is or is not well supported after serious events; this support, she says, can make the difference between developing trauma or not. This reminds me of the description of trauma by Gabor Maté: ‘‘Trauma is a psychic wound that hardens you psychologically and that then interferes with your ability to grow and develop. It pains you and now you’re acting out of pain. It induces fear and now you’re acting out of fear. Trauma is NOT what happens to you. Trauma is wat happens inside of you as a result of what happens to you.’ 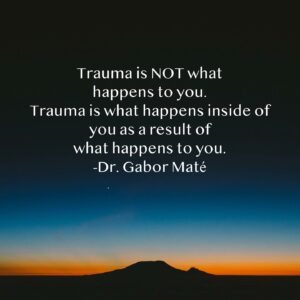 Henriëtte thinks along: “That is a beautiful description! What I find problematic is that neglect and bullying are not in the DSM, although they have a huge impact. Still a lot has to change there. And at the same time, the word ‘trauma’ also seems to have become a ‘waste bin’ category for all kinds of problems. When something doesn’t work out, people sometimes say: ‘It gives me a trauma!’ On the one hand, you make it too simplistic that way, but on the other hand this might be a sign of this topic slowly but surely getting more attention from society. When I became a sociotherapist, almost no one wanted to work with traumatised people. Do you know the book by Judith Herman? It was my ‘bible’, and in fact it still is. Wholeheartedly recommended.” Why Judith Herman’s book is still her ‘bible’, is because it is still very current: “Herman explains how the question of whether or not trauma can be discussed, is very closely related to societal trends regarding the topic. Somehow, you know, all of us do NOT want to know at all those appalling things that have happened. We do not want to know about sexual abuse, about physical abuse, about parents who do that or let that happen. We do not want to be able to imagine all that – it is too painful. Now that we have more treatment options, it seems as if there is more room to discuss these issues. Despite all that, the work with traumatised people is still highly complex and if you are not transparent and ‘down to earth’ towards your clients and you harbour a hidden agenda, then things get out of hand. You will get friction and people will start looking for the boundaries. They are very good at that, because they have had to do so all of their lives. Then you get into this atmosphere of: ‘I will try and see whether I can really trust you or not. When will you, too, spit me out again, because you are fed up with me?’

We look at each other and let the intensity of such a primal perception sink in. “Some people are so damaged… their whole lives, they have not experienced anything different than that. Because we know more about neurophysiology now, it is a bit easier for therapists to understand what happens if people show behaviours that are hard to deal with and, to then sit and lean back and not become personally triggered. It happens… I’m human, too, and then I realise they have touched upon my own vulnerabilities … (she laughs), but with more professional experience it is much easier to return to and to establish or restore the connection. Connection… that is also part of the essence of my work. It may take a long time before that needed connection is there, but when it’s there, it’s there!”

We talk about what gives Henriëtte most satisfaction in her work. “The progress, the growth, the fact that people learn to see how powerful they really are, how much strength they have. Many of my clients feel extremely vulnerable, despite their apparently normal lives, with families, jobs and studies. I always try to point out how powerful they are, because otherwise they would never have been able to make it until here, straight through all of the misery. Many people with childhood trauma have comorbidities: numerous issues intermingle, but they are not always being linked to trauma. Then people sometimes get a message that more or less says: ‘Well, sorry, but your problems are too complicated; we cannot treat those with method X or Y.’ People are often given the runaround… In many places, there is still a need for much more psychoeducation to make sure that both in healthcare and in society at large, we call come to understand much better why people turn out and behave the way they do, about how their personality has been shaped.
That childhood plays an important role in many problems and disorders, and should get much more attention, is a true fact according to Henriëtte: “I wish that children would be much better listened to, also in youth care and social services. When thinking of all the adults I see, I’m not so sure I would be able to help them if they were children. I think I might feel too overwhelmed, too afraid of a bad ending. The adult clients at least survived until now! It really makes me sick, to see what children and young people have to go through right now due to the lockdown. Overall, I think child wellbeing is not given priority in our society; there is too much focus on achieving, even when they are still babies. Sometimes, at the age of three months, it seems they are already supposed to eat vegetables…” She wiggles to and fro on the couch and lets her head fall from left to right and to the front: “Spin… spin… spin…” We laugh about the sad image of a baby who cannot sit yet, but from whom so much is already expected. “Just let them be babies!”

That is a great motto: give babies the space to just be, with all needs attached, while simultaneously being aware of the fact that in all of their vigour and vulnerability, babies are full-fledged humans with rich emotional lives. When we respect their needs and feelings, we help them to view themselves and the world with compassion.
Next week, we will continue our journey with Henriëtte and we will, among other topics, address security and authenticity.