Last week, we discussed how it can be very difficult for parents to meet the needs of their children, especially when they have to deal with all kinds of influences from the social environment and are supposed to go along with different sociocultural practices and meet specific expectation patterns. Keeping a closer eye on the child’s interests and attuning to them requires a process of self-reflection that can be very confronting for adults. What makes it so difficult to connect with the child and its needs?

From a biological perspective, humans fall within the class of mammals. There is a distinction between cache mammals, nest mammals, follow mammals, and carry mammals. All these species have different ways to take care of their young and have different fat percentages for their milk. This, of course, is what connects all of them: the fact that they feed their young with milk from the milk glands of the mother. Humans, like all other primates, belong to the carry mammals. Their milk has a limited amount of fat and the mother, therefore, has to feed her baby at short intervals. That is why she carries her offspring, so that it has access to the breast and can nurse time and again. Of all primates, human babies are the least mature at birth, so that for a long period of time, they are dependent on the care of their mothers and other adults. Without that proximity, they are more or less sentenced to death: anytime, a sabre tooth tiger can appear around the corner and eat them. For this reason, human babies have evolved in such a way that all of their behaviours are aimed at keeping the caregiving adult close. If babies succeed in doing so, they will feel safe. If they don’t, there is a constant sense of threat and danger, resulting in a physiological state that becomes stressed and prepares for fight, flight or freeze. In that mode, large amounts of stress hormones flow through the body, all meant to make sure that the organism can bring itself back to safety. Other physical functions are subordinate to that effort, such as learning processes, analytical thinking, planning, creativity, play and empathy. The body suffers from that high stress, but if all goes well, it will only last for a short time and will then be functional: the stress helps to escape the danger. 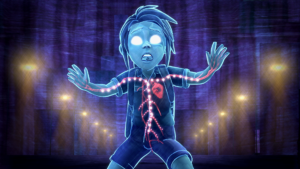 A still from the documentary ‘Resilience’, representing the survival mode of child experiencing toxic stress

When the stress is permanent, however, and the individual does not succeed in regaining calm and a safe haven, the stress starts to harm the brain, as well as other organs, and so the stress regulation system is disrupted. Chances for disease and problems later in life then increase. The stress is stored in the body’s memory and will refuse to simply fade away once the event is over. The risk becomes that the person remains dysregulated or at least develops a vulnerability for dysregulation. This is a serious issue, because, as psychiatrist and trauma expert Bruce Perry says: ‘An emotionally dysregulated adult cannot regulate an emotionally dysregulated child.’ When they are both in survival mode, it is hard for both of them to take the other’s situation into account. This is the essence of why it is hard to put yourself in someone else’s shoes (feel empathy) and have consideration and benevolence towards the other (feel compassion) if you yourself are structurally, intensely or repeatedly stressed. A sensitive, responsive approach of others is hard when you’re under stress: you have more than enough to deal with on your own. 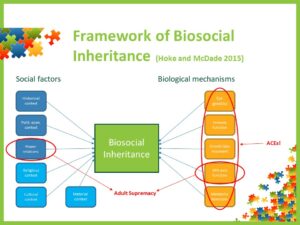 Remember the Biosocial Inheritance? ACEs affect the biological mechanisms that are influenced by social factors. Specifically the combination of problematic effectuation of power relations between adults and children and its influence on stress regulation is the essence of Adult Supremacy. (Of course, all these aspects are intertwined!)

A responsive approach means that you react to someone else in an adequate manner, that you acknowledge the other person’s needs or try to meet them, that you see their questions and predicaments and take action. For that, you need a certain amount of empathy. If you have that, you can respond: you carry responsibility. In relation to stress and trauma, this is often described as ‘response-ability’: the ability to respond. When you are highly stressed and in a survival mode, you cannot answer, you are not answer-able, you do not have response-ability, not for yourself and not for someone else. Put differently: the more burdened parents and other adults are, with their present chores and duties or with pain, grief or trauma from the past, the harder it is for them to really see the child’s needs and satisfy them. This way, an endlessly repetitive pattern can arise of stress leading to stress, of disturbed development leading to disturbed development, of lack of connection with the self to lack of connection with the other, in short: of intergenerational trauma. The child, based on its immaturity, can usually change little to nothing about such a situation; that really is the task of the adults in the social community. They have to take up these issues and deal with them. Policies and therapies have to fix the adult problems, the adult structures, not the children. Those children and the problem behaviour they may exhibit, are only a symptom, a reflection of the problems in the adult world, in which the child loses the connection to self. This can happen because for the adults, the authenticity of the child, the unique singularity, the powerful urge to fully unfold itself, may be too much, too difficult, too complicated, too different, too confronting, too painful in relation to how they themselves were not allowed to be who they were when they were little. That is hard, because in order to survive and be happy, you need more than physical safety. Emotional security, being able to survive spiritually and creatively, are just as important, as we know from science today, because emotional insecurity leads to all kinds of misery. How can we prevent that? Investing in the child

As parents and adults, we all know this feeling of being ‘done’, ‘out’, of not being able to remain patient, of not wanting to be approachable for the needs and endless questions of our children. Does this explain something about how ‘troublesome’ and ‘nasty’ the child is? Or does the amount of impatience say something about the degree to which we are or are not sufficiently grown-up to see these child longings for what they are: a deep need to be heard, seen, valued and appreciated?
Modern science, both social and medical, shows how important those early years are: those who start out healthy, usually increase that positive head start; those who start out unhealthy, see diverse problems pile up throughout life. Childhood, thus, is a very intensive phase in life for parents, a phase in which they (have to) comprehensively put time and energy (and money) into the child’s future. This is not a plea for ‘child supremacy’, but it is a call to strive for more ‘child inclusivity’ as a society, for policies in which the needs and consequently the rights of children are taken much more seriously. Despite several trends to the contrary, it also seems urgent that the caring for children is no longer personally and societally viewed as a problematic set of expenses that are a nuisance, but as an honourable job, a fantastic investment in the new generation. Every child is born with a hidden potential. Through nurturing care, that potential can bloom and make the child flourish.

Taking care of children deserves more social and economic status than it possesses right now, but for that to happen, the adult supremacy will have to give way. Adult interests (more societal, such as neoliberal ideologies) and the interests of adults (more personal, such as individual development away from the child) will have to take a step back in relation to what children, as the weaker party in a power system of the community) need. That is probably a challenge for which a paradigm shift is needed, a fundamental change in how we view children. Such a change, however, in which compassion is key, along with curiosity about what drives the child, is more than worth the effort in all aspects, because, as the 19th-century, abolitionist activist Frederick Douglass said: ‘It’s easier to build strong children than to repair broken men’!

This was the final part in a series on Adult Supremacy.