Last week, we discussed several basic aspects of human coexistence and children’s need to feel secure and integrated within their communities. From there, we work further towards the concept of Adult Supremacy (AS). Today, we pose the question of how the interaction between social factors and biological mechanisms influences health and wellbeing.

Last week, we looked at how historical aspects are partly responsible for building the local character. In that, we deal with properties of the natural and the social environment, but of course, there is much more involved. Every country has a history; there were wars, natural disasters, revolutions, technological innovations, infrastructural developments, changes in societal views, and much more. This whole interplay is both caused by and consequential for a country’s politics and economy. It also influences how relationships and the social environment take shape. And, in relation to our Adult Supremacy-theme, even more important: all these aspects have power facets, that can be explicit or implicit, and that result in less or more dependency on the decisions of others.
Who is in charge at the global stage? Who determines which societal needs the government will support to satisfy, policy-wise and financially? Who decides what is important, when and for whom? And at the micro level: what do those adult decisions mean for the daily life and health of babies, infants and children? How do those social aspects impact their biology? 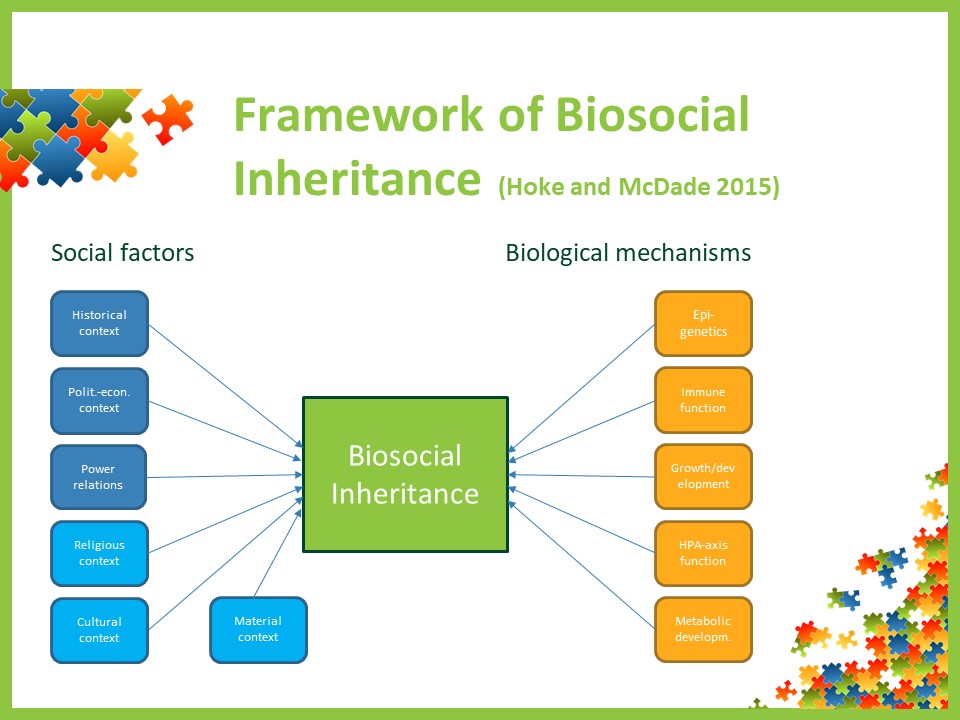 Anthropologists Hoke and McDade summarised the result of all these interactions in the term ‘Biosocial Inheritance’.  This means that the ‘inheritance’ we receive from our parents and grandparents and from the society in which we grow up, is built by both biological and social aspects, that mutually influence one another intensively. Through this mechanism, social and health disparities are transmitted and often reinforced. This process, by the way, does not start after birth, but already begins in the womb, as the research by Tessa Roseboom showed. She studied the influence of the Dutch Hunger Winter in the Second World War for several health issues in the next generation. The famine and stress of the war turned out to have an influence on the health of the children who were conceived and born in that period. (Here, you see Tessa Roseboom together with Minister of Health, Hugo de Jonge, in an interview in 2019; the minister says that we only have one chance to get it right for a healthy start!)
From the physiological perspective, the coherence between the social and the biological is logical: if there is a lot of threat, if you feel lonely, or if you live in famine (social factors), your psychological and emotional perceptions change, leading to the activation of your stress system and an adaptation in your metabolism (biological mechanisms). This influences what the organism learns from each situation for the future (the interaction). Of course, we do indeed have to learn from such situations, because if we do not, our survival in the short term is at risk. The question is, however: what price do we pay in the long term for the negative consequences of that interaction?

If we know that the influence of cultural habits, traditions, and human interaction is so big, shouldn’t we give more attention to the way we communicate with and treat babies and young children? If, in study after study,  that early period turns out to be the main explanation for how a child approaches the world as an adult and how health develops, should we not consider change to be urgent? The high burden of disease that results from it at a societal level surely speaks for doing so. These issues may seem obvious, but they are not that easy to solve. They imply a quest in which the role of adults is a significant factor. Of course, that role, in and of itself, again also carries its own biosocial inheritance.
Babies and infants are dependent on the care of the adults around them. They have a deep need to attach to those adults and simultaneously an intense urge to be and show themselves. They have little to no opportunity to leave a deficient environment and find a new one, an environment that does more justice to their personality and in which the young human is actually being seen, heard and valued for their unique individuality. Often, the consequence is that if the need for personal expression comes at the expense of attachment, attachment is favoured: after all, without the adults, the child cannot survive. Thus, authenticity is being suppressed and the child becomes alienated from themselves: the basis for trauma. In this video, trauma specialist Gabor Maté further explains this principle. 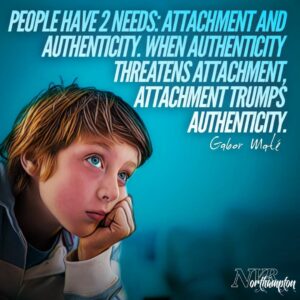 The tension between attachment and authenticity is something that deserves attention, seeing there are many cultural practices of which we know that they disturb or negatively influence a healthy development or powerful authenticity, practices that therefore deserve or even require a critical  reexamination. That is not easy, and usually pretty confronting, because what we find will often be about habits that are deeply ingrained in our culture. We view them as so normal that it is hard to consider the thought that they might be harmful, that they constitute social conventions with a negative impact on the biology of our youngest. Take for instance the so-called ‘survivorship bias’, the argument of ‘yes, these bad events happened to me, but I turned out alright, didn’t I, so it isn’t all that bad if my child gets its butt kicked!’ If we closely investigate such patterns, it often actually means that we have to revise the status quo, reconsider the power positions. Think, for example, of discrimination and segregation of certain population groups, but also of corporal punishment (spanking, a ‘loving slap’), of not respecting a child’s physical integrity, of divorces with a lot of quarrels and alienation. Furthermore, you can think of institutionalised forms of policy in which stress for the child is lurking or certain: very  early childcare away from the parents, birthing practices in which mother and baby are not kept together, circumcision without a medical indication, parenting methods in which blackmail, humiliation, isolation and adult supremacy are utilised or encouraged (‘if you will not do [x], then you will not be allowed to [y]’, ‘you are such a disappointment, ‘go to your room, I don’t wanna see you for a while’, ‘teach your child who is the boss’). Today’s conclusion can be that health and wellbeing are influenced by biosocial inheritance, the very complex and historically formed interaction of social factors and biological mechanisms. In all that, power relations play an important role. Children, due to their dependence, cannot escape the choices of adults and will regularly have to sacrifice part of their authenticity to maintain their attachment relationships, with all due consequences

Next week, we will look at the influence of different forms of stress on development and power relations will be featured more prominently.