Whether I wanted to give a guest lesson at her school about secure and insecure attachment. She also had to take an exam for that subject and this could nicely be combined with my lecture. Although I did not yet have a picture of what an exam within a lesson would look like, I didn’t have to think long about the question: yes, of course I wanted to do that! ACE Aware NL lives for more awareness about attachment and trauma, so a guest lesson is completely in line with our mission. We scheduled an initial meeting to see what she needed from me and how I could support her in preparing for her share of the lesson. It was an elective subject in which experiential expertise plays an important role.

We made an appointment at the work location of her internship; the manager there had put me in touch with her, so this seemed like a suitable option for an introductory meeting. We shook hands, she made me a cup of tea and then we sat down at one of the tables in the small, cosy restaurant that is part of her work location. She looked at me inquiringly and expectantly, not quite sure what to expect from me. I started to ask about her education, about her background, about what she thought of the internship, about what she encountered in her work, about how she used her personal experiences there. I didn’t have to pull it out, shall we say. Once she realised that I really wanted to hear her story, she became wonderfully talkative. Before we knew it, it was high time to wrap up, as she had to go home, where her child was waiting for her. We made some arrangements about how to proceed and said goodbye. In the days that followed, I sent her some video and reading suggestions. This subject and everything associated with it is so close to my heart that I may have inadvertently overwhelmed her a bit. She was very interested, but browsing everything turned out to be impossible, especially because the past still catches up with her, despite her hard work in the present for the benefit of her future. Although the home situation appeared to be fairly calm when we met, a few weeks later there was again ‘stuff going on’. That stuff demanded so much of her attention and had such a high priority that it put pressure on her studies. Nevertheless, we found time for another conversation and we went through how she could organise her exam part within my lesson. She quickly sent me her proposal with a PowerPoint and so I could build my share around it.

On the day of the lesson, there were eleven people: the teacher/mentor, eight students present live, one student online and myself. I opened with an icebreaker for the introduction. They have known each other for a while, but I wrote down a couple of questions to which they probably did not fully know each other’s answers. They worked in pairs and gave feedback in plenary, because the group was new to me. They had to introduce their neighbour to me and they sometimes noticed that it took some searching and thinking and inquiring to come up with all the details. After I had heard all the names, I explained how a range of attachment aspects immediately plays a role in such a small assignment. How well are you able to listen to the other person? Do you have peace of mind or is it all one big mess in there, because you have already started the day violently or because you are still tired from what happened yesterday? Can you keep your focus? Can you correctly retell what the other has shared with you? Or are elements creeping in that do not make sense? Do you understand what the other person is saying or do they somehow speak a language that you do not understand, literally or figuratively? Can you keep listening without judgment, even when you hear things that are strange to you or with which you disagree? All these aspects have a link with (in)secure attachment. They are about the set points you created in childhood for your stress regulation. Were you listened to? Were you understood? Was what you said well understood? Could they hear you without judgment? The less securely attached you are, the more difficult all these seemingly simple tasks often are. 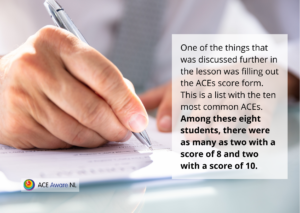 One of the things that was discussed further in the lesson was filling in the ACE’s score form.
This is a list of the ten most common ACEs, although there are definitely more, as mentioned by one of the students. There are also versions that include racism, poverty, death of a parent, and violence of war. That is of course completely justified, because these events also have an enormous influence on child development.
Nevertheless, the list used today already provides a lot of guidance. The list contains ten ACEs, so your score can be a maximum of 10 if you add up all the times you answer yes.
Among these eight students, there were as many as two with a score of 8 and two with a score of 10.
I found it intense to hear the scores and find it intensely sad that there are so many children who start their lives with so much misery. How much happiness is not experienced as a result? How much potential remains un(der)developed? As a result, how much effort does it take people to build a fulfilling life? With such a start, how difficult is it not to be in constant conflict with yourself and others? It is great to see that these students have all found the courage and the opportunity to start a learning process again and to ‘exploit’ their own experiences in a positive way and to use them in the guidance of others with a ‘backpack’ filled with setbacks. 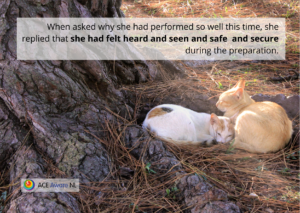 The matter was eagerly taken up, so we agreed on a follow-up lesson. I’m looking forward to it!
And the intern…? She got great feedback from her classmates, that she had made such progress, that she was so much more powerful than in a previous presentation, that she had touched her fellow students with her story, that she was considered brave for making herself so vulnerable through connecting the theory from the video she showed with her own sad experiences, that people had learned a lot and recognised themselves in what she had shared! The mentor was also full of praise and I had the honour to sign the form for her presentation as ‘second examiner’. When asked why she had performed so well this time, she replied that she had felt heard and seen and safe and secure during the preparation. Safe and secure… that oh-so-basic feeling, necessary to let your creativity and authenticity flow! I was touched by her words. For me, there was no exam form that had to be signed, but if there had been one, she could have signed it for me. I’m also not sure who learned more in this process: she and her classmates, or me. My thanks go to all in the group (no names, although I still know them from their introduction round), for the warm reception, the attention and the input and for the invitation for a follow-up. And most importantly, I take off my hat and bow to their guts and resilience!