In this blog, we will review a book by Bessel van der Kolk, a (Dutch-born) psychiatrist, researcher and author of the book, among others, ‘The Body Keeps the Score’. Since having been published in 2014, the book has become a best-seller and is one of the most prominent books about the effects of trauma on the biopsychosocial level, both for the person and for the society as a whole. He is also the founder of the National Child Traumatic Stress Network (NCTSN), which is a network of organisations and professionals in many different sectors of society that specialise in treating traumatised children and their families all over the US.
Although the introduction of his book feels like a curriculum vitae, it is very relevant to understand Van der Kolk’s work and the way he chose to present his ideas and arguments. He uses many real-life examples (fully anonymously of course to protect the identities of the families). He advocates multidisciplinary cooperation within communities, the same way he works with different professionals from around the world and at the NCTSN.
Per part of the book, we will give an overview of the main aspects dealt with.

Part 1
Part 1 is an account of how Bessel van der Kolk started researching traumas and it is almost an account of how the field of trauma studies and trauma research evolved to what it is today. He started his career working with Vietnam war veterans who experienced symptoms of PTSD. However, in the 1970s in America, PTSD was not yet an official diagnosis. Van der Kolk observed many veterans walking into the clinic with complaints about nightmares, panic attacks, rage, aggression, urge to drink or use substances and finding little support because of the lack of resources. As a way to offer them a form of support, he organised an informal group meeting where the veterans who felt unable to talk about their experiences (because of numbing or loss of words) started to share their stories within this social group. People felt supported, came back for a next session and continued coming to the meeting for weeks.
In 1980, he started working with another group of patients: child abuse survivors. He noticed that this area of study was just as understudied as the PTSD in veterans, and that there were similarities with regard to the symptoms that the war veterans were exhibiting. In the 1990s, brain-imaging technology helped scientists to see the effects of trauma in the brain and brought about a new understanding of trauma. Van der Kolk describes this as:
“Trauma results in a fundamental reorganization of the way mind and brain manage perceptions. It changes not only how we think and what we think about, but also our very capacity to think. We have discovered that helping victims of trauma find the words to describe what has happened to them is profoundly meaningful, but usually it is not enough. The act of telling the story doesn’t necessarily alter the automatic physical and hormonal responses of bodies that remain hypervigilant, prepared to be assaulted or violated at any time. For real change to take place, the body needs to learn that the danger has passed and to live in the reality of the present.”

Part 2
Part 2 delves even deeper into neuroscience and the ways the brain and the body respond to toxic stress and trauma and how people do or do not make sense of their traumatic experiences. Two pictures and their accompanying stories are showing this quite strikingly, as explained below. 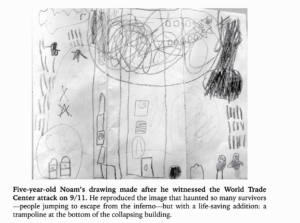 First, little Noam witnessed the World Trade Center attack on 9/11. He witnessed the first airplane crushing on the Twin Towers and the people falling to their death. The following day he made this drawing of what he had witnessed; in his drawing, however, the people weren’t falling to their death but on a trampoline (the black circle just to the right of the door). Van der Kolk explains that Noah was growing up in a loving family; his caregivers were calm and responsive. Probably, while the initial event created a flight response in Noam, in the safety and security of his home, he was able to make sense of the whole incident he had witnessed.

Second, Stan and Ute, a couple, had a horrible accident in 1999. Three months later, they were both suffering from flashbacks; they were tense, hypersensitive and irritable. They asked Van der Kolk’s team to have a brain scan. Stan’s brain showed that he was reliving the trauma over and over again, causing him to sweat, tremble and feel his heart racing. Ute’s scan was different; it showed that she froze everytime she was reminded of the event, which led Van der Kolk to believe that this came from some unresolved previous trauma that had conditioned her to dissociate.
Van der Kolk explains that traumatised people’s brains have a difficult time processing internal and external stimuli and tend to interpret some signals as threatening although the danger has already passed. 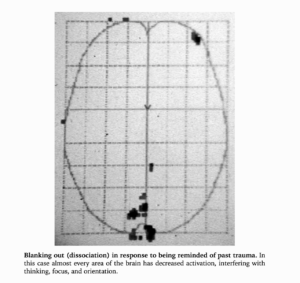 In order to point out the connection between mind and body, Van der Kolk mentions two famous scientists: Charles Darwin and, our contemporary, Stephen Porges.
Darwin documented the responses many animals have in the face of threat and he observed that when an organism is stuck in survival mode, they have no room for nurture or love. He explains this beautifully in this quote:
“If an organism is stuck in survival mode, its energies are focused on fighting off unseen enemies, which leaves no room for nurture, care, and love. For us humans, it means that as long as the mind is defending itself against invisible assaults, our closest bonds are threatened, along with our ability to imagine, plan, play, learn, and pay attention to other people’s needs.”
He then goes on to outline Stephen Porges’ polyvagal theory, as a theory that unifies the body with the mind and that can explain the body’s response to toxic stress and trauma. In the rest of Part 3, Van der Kolk discusses the Diagnostic and Statistical Manual of Mental Disorders (DSM) used to diagnose disorders by mental health professionals. He points out the problems with giving people a diagnosis of trauma (sometimes resulting in PTSD), without paying attention to the root causes of their health issues. He also mentions the slow progress the medical community has been making in recognising issues as a sign or symptom of trauma and then translating them into trauma-related diagnoses. He also discusses the results of the ACEs studies and how these are proof of a larger, hidden epidemic of developmental trauma, which, despite its prevalence, remains unclassified as a health risk, and has no formal treatments.

Next week, we will look at Part 4 and 5 and provide a short analysis of the book as a whole.

Posted in Book and movie reviews.