Last week we started the series about Mirjam, who candidly speaks about her childhood experiences. This week we continue her story.

We talk about her father, who she describes as ‘invisible’, often away for all kinds of meetings. She has the idea that he fled the situation at home. Her mother had experienced the war and was very fearful, especially because her father (Mirjam’s grandfather) developed some resistance activities. Her mother’s fear was such that grandpa stopped those activities, fearing that his daughter would unwittingly betray the matter by the expression on her face.
Her fears made her try to keep a firm grip on everything in life: “When we started dating, my mother told my husband-to-be that he needed to know one thing, which was that she had control over all her children. “I’ve got a hold of them all”, she said, and he did not know what to make of such a statement. Like me, however, he has discovered that it was true and that my mother really had a lot of control over us, causing division between us as family members. Recently, uncles and aunts have also indicated that my mother was not an easy one to live with in her family in the past. Her fear that things or clothes would get dirty caused my mother’s presence to regularly be experienced as oppressive. I get it; I, too, would like to be free from her judgment and finally not let it affect me like that anymore.” 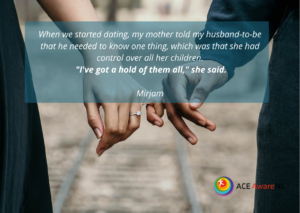 Mirjam thinks back to the unhealthy dynamics in her grandparent’s family and illustrates once again something that is so often the case, namely that problems and trauma have an intergenerational history. She recalls painful memories. For example, she once went to the zoo with her sister on a Sunday, which was very exceptional. The loving, childless neighbours wanted to take the girls out for a day, because they always worked so hard at home. Sunday was problematic (the ‘Day of the Lord’), but Saturday, the day of the cleaning, would be even worse, so they went on Sunday. “My mother had warned in advance: ‘Well, then, you can go, but you cannot buy anything, because then you will go to hell.’ My sister and I had decided beforehand not to buy anything, but when we arrived we realised that entrance tickets had to be bought, of course, and later the neighbours wanted to eat and drink something in the restaurant. We tried to prevent that, but it didn’t work. That night we begged God on our knees to make sure we would not be lost. So, all in all, my mother’s cleaning was even more sacred than Sunday, because she would not let us go on Saturday and put us in danger of hell on Sunday for possible misbehaviour. The dear neighbour knew nothing about it. My sister told me that not too long ago she froze at the zoo and the sight of the restaurant. So thoroughly mean, to indoctrinate your children like that…”

She talks about her younger years, how she was cared for by a neighbour, because her mother was busy on the farm or cleaning. She was also often with the living-in grandfather and grandmother from father’s side, who lived in the front house with their handicapped son (her uncle). They were sweet people, whom she loved very much and who sometimes explicitly stood up for her, for example when her mother said several times after she was born that she thought her daughter was so ugly. Her grandmother once said: “You should stop doing that; two eyes are looking at you and they are asking you to be a mother to this child!” Her mother also said this in later and even quite recent years and when Mirjam asked why she thought it was so important to repeat this over and over, she said: “Well, the truth deserves to be told – you were just ugly.”

After high school she moved out and found a room because of her studies and for that reason her parents did not pay for her wedding. They thought she should stay at home, where she had been caring for her grandmother for years and later on also for her grandfather. Mirjam’s limit had been reached, however: she refused to take care of the disabled uncle after the family moved, and considered that as a task of the uncles and aunts. Social workers said that if there was even one person against the uncle staying at home when things were getting worse, he would move to an institution. When Mirjam indicated that she was against him staying at home, however, her wishes were not taken into account. Social work was of the opinion that she was not able to understand the consequences of her choice: “You will regret doing this to your parents”, was their statement. Then she said: “If he comes in, I’ll move out.” So it happened, but her mother was angry about it and said: “Just wait, if you later have a disabled child yourself, you may sometimes think back to this selfish choice.” With every pregnancy she went through, Mirjam thought about that and she felt fear, fear that she would have a handicapped child as ‘punishment for her sin’. 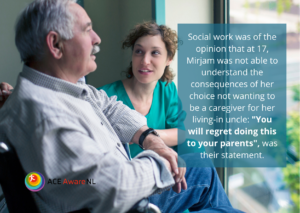 The children developed their own coping strategies; one child regularly held her breath and then fainted – a very adequate method of ensuring she was spared. Another child also had regular physical complaints, such as severe eczema. Only Mirjam was in good health and therefore often had to suffer.
Living on her own was therefore a liberation, but one that was accompanied by lies about her study/work schedule, because if her mother knew she was free, she wanted Mirjam to come home. Mirjam then had a good conversation with the supervisor of her training, in which she indicated that she did not give permission for the passing on of her schedule. Mirjam thinks her mother was ashamed that her daughter chose to move into rooms. Like her sisters, Mirjam was offered a car if she would continue to live at home, but Mirjam declined the offer. As a result, she had to pay for her own education and, unlike the others, did not get a car for traveling back and forth. Nevertheless, her study time was a wonderful time, a period that she would have liked to extend a little longer: a life of her own, with friends and freedom.

“My mother felt that the education I chose was well-suited: I would probably find work in it quickly and that was necessary, because I was so difficult and critical that I probably would not get married. With a permanent job in care that also required me to work on holidays and weekends, nobody would be stuck with me.”
But she did get married, at 24, and when the eldest child was born, she realised that the freedom of those studying years would not come back that way and that her childhood was really over. She was overjoyed with the children and was determined to give them a different childhood than the one she had had. Nevertheless, she felt: “You can always make all kinds of beautiful choices later, but the open-mindedness that you should be able to experience in childhood or study years will then be over.” 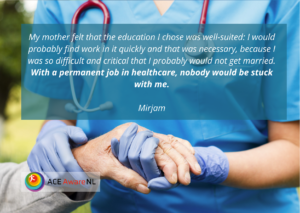 We are talking about an aspect that is often overlooked, namely that trauma experts are increasingly emphasising that not receiving what they expect to receive (namely loving attention and safety) is often more harmful to children than being given something they have to find a way of dealing with. The lack of loving attention makes it more difficult to love yourself and that has a huge impact on how you approach life and whether you feel that you matter. Mirjam recognizes this: “I still find it very difficult to go a beauty salon or to buy something for myself, or to let myself be pampered. I am very generous towards the children, but towards myself… really very difficult.”
She tells how she, with respect to the children, has always looked at what they needed. That was her intrinsic attitude: asking and probin, also regarding feelings and experiences, and looking for the best for that specific child. “That is not comparable to how my mother dealt with things. When I got cancer twelve years ago, the first thing she said was: “Then you come to me even less often? That something like this must now happen to me again. And what a shame, for your employer, that you cannot work now.’ All those kinds of situations are still very sharp in my mind and they continue to hurt…”

We talk about possible causes of such family dynamics. “Our home was very much about what other people would say about us. The bar for judging ourselves was even higher than for judging others. As a result, everyone was constantly on their toes. The biblical ‘honour thy father and thy mother’ was leading, but my mother forgot that it also says ‘do not embitter your children’. My mother was in the victim role; throwing and visiting birthday parties, being waved goodbye on a school trip, being brought and encouraged at diploma swimming… no time was made for it: work always came first. On Sunday, the day of rest, we were allowed to read, do puzzles or do homework for our religion class, but not play outside or do anything that could make you dirty. Only later, with friends, did I discover the cosiness that can be present in families and I really eagerly drank it in.”

Next week you will read the last part in the series about Mirjam.