Last week, we read quite a number of Mirjam’s sad experiences. This week we take a more analytical look at her life.

Mirjam tells how new life experiences gradually offered her more insight into how serious the situation at home was. She considered cutting the family ties at times, but became anxious about what that would mean for relationships with sisters and other relatives. Would she herself then confirm that she was indeed a difficult child…? “To this very day I notice that I try very hard to earn love, while at the same time I have a lot of trouble receiving love. Am I worth it? After all, what I did for my mother was never, never enough. I feel that because of that, I am still yearning for people who will accept me for who I am, not for what I do. That sometimes makes relationships with others difficult, because you long so intensely for… well… actually to curl up in someone’s lap in loving arms, to experience security… That longing characterises my life.” Together we sit in silence, moved by this candid analysis of what childhood engendered well into adult life.

I talk about the balance we seek as a child between attachment and authenticity and what the consequences can be if a child has to suppress that authenticity for the sake of attachment, that the child loses the connection with their true self – the foundation of trauma.
Mirjam is silent and thinks and then says: “Yes… I recognise that… I have completely lost myself in trying to earn what I never got and at the same time I find it difficult to receive love. The children are an exception; with them it works.”
I ask her if she is proud of how she has been able to break a pattern in her own family. With some modesty, but also determinedly, she answers: “Yes, I am proud of that. I was sometimes unsure about it, but I now see, also with the grandchildren, how different things have gone with us.”
That did not come naturally; sometimes she worked like a lioness to protect the children against the negative influence of her mother, who considered the grandchildren’s music performances embarrassing, immediately after departure threw away crafts made for her, or disapproved of the grandchildren’s study choices. “The faces of the children when their grandmother treated them like that… then my heart broke. She destroyed so much beauty on a structural basis.”

I ask if Mirjam has an idea why she kept ending up in environments that were difficult for her, both privately and in terms of work. “I don’t know… I don’t know… [silence] I don’t know.” She talks about the desire to really be seen and how her mother sometimes even on a birthday in Mirjam’s presence complained about how she looked, that the dress was not modern enough, that the jewelry did not shine enough. “Really everything was seen and commented on, but I, as a human being, was not seen. I was under the impression that she was ashamed of me.”
The constant judging by her mother served as a worrying example. When I ask if she has anything she classifies as a bad habit, she says, “The judging.” She is silent for a moment after this conclusion, before continuing: “More and more, I have learned to look at others with an open mind, but that is a choice I consciously make; it is not yet my default. Not judging is a skill I am still training for.” 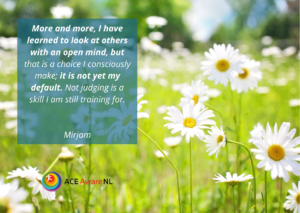 Looking back, what does Mirjam see as her saddest and fondest memories?
“One of my saddest memories is the period surrounding my HAVO/high school exam. My grandfather died then; I partly cared for him and was very sad. As a result, I had not been able to prepare properly and I had to re-examine one subject. My father said it did not matter that I failed because I was a girl. My mother said she was sorry I failed; it would not have been necessary, she said, if I had concentrated better. I stiffened and looked at her wide-eyed, whereupon she said: ‘You can cry, if you like’, but she offered me no comfort or acknowledgment of my grief. That made me decide on the spot never to cry at home again. It was not until some twenty years later that I could really cry again, when someone did something very sweet for me to spoil and nurture me; then the tears came.
My fondest memory is the winter when my little brother was born. It was around Christmas; my mother was in childbed.” She smiles and begins to whisper: “We took care of that little baby as children and it was the first time that we did not have to work over the Christmas holidays! There was an air of endearment in the house and we cuddled up with that little fellow.”

When I ask about the essential aspects of her childhood for her development as a human being, she thinks before she searchingly and tentatively formulates her sentences: “What I was very determined to achieve was that I want to do my best to see and recognise the other person as they are because I missed that so much myself. I was constantly told and threatened that there would be severe consequences if I did not behave the way my mother wanted me to. A car, my wedding… the others got paid for it by my parents, but not me, because I had made choices they considered inappropriate. I have often felt very powerless and can really imagine things like self-mutilation and suicide. Those are attempts to be seen and heard. If you have the feeling that at the very core you do not matter, you lose all meaning. Fortunately, what always drew me out of there was my love for our children.”

Although she was greatly affected by the situation at home, deep down she always felt that it was not right. There is more passion in her voice as she says: “That on the day of my seven-year-old sister’s funeral, we had to get up extra early so that the cleaning could still go on… I was twelve, but I definitely felt that was idiotic! I wanted to say goodbye to my deceased sister; my other sister and I stopped cleaning and walked to the door, where we saw and heard the hearse drive away over the gravel. I already said there and then that this was not normal. Anyway… even when I once contacted the GP and said that my mother was completely hysterical and seemed to be going mad, it only led to a shot of valium, not a thorough investigation into how things were going at our home. As children, we were not protected from what was happening and at a  moment like that, my mother was actually kept calm with medication.” I suggest you could see this as an addiction, both the endless cleaning and the medication. It is said that not everyone with trauma becomes addicted, but addicts almost always have a history of trauma. I share with Mirjam Gabor Maté’s definition of an addiction: everything you do and need to generate temporary relief from pain, behaviour that you cannot part with and which is harmful in the long term and disrupts your life. Mirjam listens attentively, is silent for a while and then asks me to repeat the description. She lets it sink in again and says she can relate to it. “I think my addiction was that I always kept going, not being able to rest, because continuing helped me to not feel the pain.” In recent years she has set aside more time for this, sometimes forced by illness, and she feels progress. For example, she has now decided that she will call in sick for her work, now that another difficult process awaits her for cancer treatment. The interests of the family weigh heavily here, because when it comes to what gives her life meaning and purpose, the children and grandchildren are her number 1 priority. What is also very satisfying is working with patients: “What I myself lacked is what has also made me strong in my job: really seeing people and spending time with them and then seeing the healing effects of genuine attention to people. Then I am very authentic. I listen carefully and see the person in front of me for who he is. I feel comfortable in that. I have nothing to lose and I don’t have to defend myself against anything. The moments when it is not possible to be authentic are the moments when I again fear that my individuality will lead to me losing people – just like it used to be.”

She concludes that it is an art to learn to receive what you did not receive at the beginning of your life: “It is often easier to have compassion for others than for yourself. In this sense, I am also concerned that there seem to be so many children who struggle with life at a young age and lack a basic sense of security. I have the feeling that adults often don’t pay enough attention to this. Children are required to adapt a lot and their basic needs are not always paramount. That basic need is love, in the form of security, safety and attention, and I am grateful that we have been able to give our children a much better start in that regard.”

With that we wrap up. We talked for a long time. In the course of the afternoon the sky has closed. The sun is gone, it is colder than I expected and it drizzles softly as I drive home.