Through the beautiful landscape of the Achterhoek, past a number of small villages, I drive to Carla Brok, my respondent of this February afternoon. I cross her doorstep around 2.00 pm; tea, butter cookies, chocolate and other sweet treats are awaiting on the wonderfully large table in the spacious kitchen that is attached to the old premises. We have communicated by e-mail and texting, but did not yet meet, so we take some time to get acquainted. The advice is still to not shake hands and it remains strange, such a distant way of meeting and greeting each other for the first time. Nevertheless, the ice is quickly broken and almost immediately we are caught up in a substantive conversation. We both laugh when I interrupt our animated exchange and ask for permission to turn on the voice recorder so that I can return to all of her beautiful stories once home. 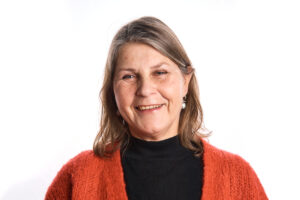 And so, right from the start of our conversation, we are in the middle of what trauma-informed professionals see passing by, of its impact on the body, and of the questions about how to deal with it, especially when it comes to culturally coloured situations. “I have a lot to do with cultures other than the Dutch, but the fear that a mother with her offspring goes through with a story like this… that fear is separate from culture. That would be tough and intense for everyone.”
With the topic of ‘physiology’ on the table almost immediately, Carla tells of a situation that has preoccupied her for the past week, illustrating how a troubling start in life can have repercussions long afterward. “The mother came to me because her 12-year-old child was showing problem behaviour. As I always do, I also asked her about her pregnancy and she said that there was a troublesome event back then: she had been chased. With her big belly and her older children in the back, she had been followed by a bunch of men in a car and had barely been able to shake them off. After driving around criss-cross for a while she luckily lost the men! Only then did she return home to avoid being chased to her front door. This mother spoke very vividly about what had happened to her, how much stress it had caused and how scary it had been. I thought it was shocking; I listened attentively, asked her how she felt about it and what it had done to her, but strangely enough, this mother was impressed by my inquiry. It was part of her culture, she said, that women are chased by men. She had received all kinds of therapy, but no one had ever asked her about this traumatic experience, and she had never told the story before; she was totally amazed that I took so much time for it. I asked her what she thought the impact of such an experience would be on the mother and what it could mean for the baby in the womb. That was a completely new idea for her, so yes… my experience is that the influence of physiology on later problems is still very underexposed. ” 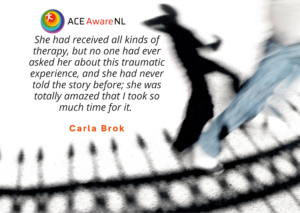 I find that an interesting statement; I share with Carla my experience that universalism in anthropology is a very difficult topic. I indicate that I do not understand that very well, because how can you passionately oppose violence, social exclusion and discrimination, if a basic tennet is to downplay the most fundamental of human commonalities? Are the needs that connect us as human beings not far more numerous than the things that separate us? And isn’t physiology a prime example of this? For example, science has taught us what we have all known from experience for millennia: perception of safety supports human stress regulation and socially competent behaviour. Of course there are cultural differences with regard to what is perceived as safe or unsafe, but that the body reacts to insecurity with a stress response… that is universal. If it weren’t, we would probably be extinct as a species: responding to danger with fighting, fleeing, or freezing is a survival response. When a child exhibits remarkable behaviour, questions that should arise are: “Who responds to whom? What underlying processes are at play here, in the child or in the adult? Is the behavior stress-related?” The fact that Carla interprets the child’s behaviour as a possible symptom of trauma in the mother due to excessive stress, bears witness to an understanding of physiology. Her approach to the situation says something about how she views the interaction between people who are close to each other and how she sees behaviour as an expression of an emotion that indicates an underlying need. I look at her, stating my guess that she has many more stories that are worthwhile. She smiles and says: “To be honest, I always think I have nothing to say! To me, it usually all feels so logical!” Perhaps this is not surprising, from her perspective, because she has been in the field of guiding people for about 40 years now, even though her work has acquired different accents, a different name and a different training over the years. “I always say that I still work as a Social Psychiatric Nurse, because I was once trained that way. Nowadays people who do this type of work are called Nurse Practitioners. The essence, however, is that I have really been trained as a practitioner, generalist practitioner in social psychiatry; that is in my blood after all these years.” I ask how old she was when she started this work. “I was 17 years and 7 months, just old enough to start the in-service nurse training. It was a very honorable profession at the time, so I had the blessing of my parents and left home at an early age. At a young age, I already had to deal with quite serious patient issues. After this, I moved on to the Social Health Care and started working in ambulant mental health care.”

I ask her if there was a reason for her interest in this field, because it is not exactly a light-hearted choice. She looks surprised and thinks for a moment. “Yes, there was! I come from a family nest with a chronically ill father with a stern Catholic background and an incredibly caring mother from a much less stern Protestant family. I am the third in a family with four children, and it was clear to all of us that caring for our father came first. He had been ill since I was born and was hospitalised every year for dying limbs. That was of course intense and his situation was central; he was always in pain and that put enormous pressure on our family. Despite retraining, my father eventually became incapacitated for work and the illness and pain that literally consumed his body eventually consumed his life. Contrary to the expectations, he nevertheless lived until over seventy. The fact that as a child, despite all the worries, I remained very curious and always wanted to know everything, because I don’t get myself moving when I don’t understand things… I don’t think that was easy on my parents. They had no mental space to satisfy my curiosity. As an adult I can understand that, but in those days as a child I could not. I did not just accept everything, but I now think that I did not make it easy on my parents.”

Next week we will hear more about what it is that brought Carla to her career choice and what she experiences as the essence of her work.