Last Friday, two of our team members found the paper version of Vakblad Vroeg on their door mat, and in it the article we wrote. It is always special to see a piece you have worked on with several people in print instead of on a screen. To actually hold a text in your hands, on paper, is really satisfying. It was extra special this time, because the road to the final version had been a long and winding one, with one step forward and two steps back here and there. Together with the Vakblad Vroeg-editors Jan de Graaf and Louise van den Broek, however, we all patiently worked towards a version that they felt would fit their audience and we felt would do justice to the message ACE-awareness has to bring.

Jan and Louise are good at editing and rephrasing, so our first version already got a nice make-over, with the essence very well preserved; great work. After another round, we were happy, the editors were happy and we all felt we were more or less done. Then the article went to the larger Vakblad Vroeg editing team and the text came back with several important questions: ‘What is the added value of ACE Aware NL, seeing that so many people are already working with concepts like the ‘first 1000 days’ and a ‘Promising Start’? What is different in your approach? What is your core message?’ Now things got a bit more tricky. We realised we had a hard time putting into words what has by now become so ingrained in our hearts and souls. We realised the big conceptual distinctions were in the seemingly small verbal differences and we had not been explicit enough in explaining them. We had work to do!

How do you, as a reader feel about what happens here…? Do you sense a difference? In what way?
We elaborated on these two sentences with the following thoughts and arguments. In the first sentence, the adults are the point of reference; this is mainly caused by the word ‘also’. The child is somehow an afterthought. The thinking starts with the adults, who often feel unsafe and insecure, and who build a wall around that feeling. That wall is thick. Oh wait… do children feel like that, too? Hmm… maybe… The children’s perception of a similar experience has a hard time getting through that wall, however. Worse, still… the sentence says that children *can* feel unsafe and insecure, not necessarily that they often do. Somehow, you can almost hear the word ‘sometimes’ being whispered after ‘insecure’. This phrasing clearly represents a power relationship in which the child is the subordinate one. This way, the child is secondary. The child is not the focus of the adults’ reflection on how they impact children’s wellbeing in either direction. 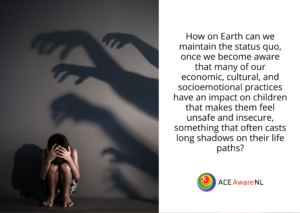 In the second sentence, we have a completely different situation. Here, the perception of unsafety and insecurity in children is a general given. It is the core of the sentence and the question is focussed on the adults: ‘Guys, let’s be humble and rumble with this issue: what makes it so hard? How come we cannot see how miserable they (often) feel? Let’s take a close look at that.’ It punches us in the stomach more or less, ‘perception of unsafety and insecurity’, and we have to let it get through to us. That is pretty uncomfortable, for sure. It asks us to take a step back, to make ourselves vulnerable and to courageously dive into this, to take in children’s feedback on their reality, without becoming defensive. This is truly difficult, because most of us adults do not consciously harm children or consider them unimportant. Nevertheless, many children suffer because of adult decisions that impact their lives, decisions they themselves cannot influence. And it becomes even more difficult when we are aware that many adults who create insecurity for a child, carry an emotionally wounded inner child with them, that itself is still looking for security. How to deal with all that…? That is not easy, but you need to ‘name it to tame it’, as clinical psychiatrist and expert in the field of interpersonal neurobiology Dan Siegel says. If we do not identify the issue, we cannot tackle it, not as individuals and much less as a community or a society.

This could be compared with the discussion on white or male supremacy, where non-white or non-male people no longer put up with whites or males who say that they, too, have all kinds of problems to deal with. That may be true, but it is beside the point, if you want to address the inequity that arises from not taking non-white or non-male people seriously and considering their wellbeing of lesser importance. If you don’t call it out, you won’t call it off. As Brené Brown says in ‘Dare to Lead’: ‘To opt out of conversations about privilege and oppression because they make you uncomfortable is the epitome of privilege.’ What seems like a small change of wording, can thus represent a completely different worldview.
And hell, yes, that can feel really, really uncomfortable… How on earth can we maintain the status quo, if we become aware that many of our economic, cultural, or socioemotional practices have an impact on children that makes them feel unsafe and insecure, something that often casts long shadows on their life paths? Well, maybe we can’t… which is exactly what makes this topic rough and tough to deal with. What is needed to prevent ACEs is in fact the same as what is needed to create change in the way we as adults (whether we are parents, relatives, professionals, teachers or trainers) approach children and the problems they have to deal with. It requires us to learn to look in a whole new way and to compassionately connect with children at a deep level. It probably also asks us to acknowledge that our own history and our own pain can stand in the way of doing so. We have to learn to understand where difficult or unhealthy behaviours come from. We have to find the ‘why’ of these behaviours and see them for the brave, but taxing coping strategies they actually are. Chances are that we have to learn new things in order to be able to do so. We have to become acquainted with a ‘biopsychosocial’ approach – a word that we as ACE Aware NL really love, because it beautifully illustrates the inextricable coherence between body, mind and environment. There is a word that we almost love even more: psychoneuroimmunoendocrinology, the continuous feedback loop between our psyche, our neurophysiology and our immune system, all influencing our hormonal states, and thus underpinning so much of what we feel, think, do, and how our bodies respond to that.

Next week, we will discuss the importance of approaching difficult situations or a gap of knowledge and insight as an opportunity for a learning process. This allows people to see that it is not about categorising yourself as being (good) enough or not, but about moving along a continuum, an upward growth line.