“When silence and ‘enduring’ have become a survival mechanism and the psyche and emotions can no longer go anywhere, then the body breaks the silence.”
“When you grow up in trauma, chronic pain becomes a wallpaper that you are so used to that it is barely noticeable.”

Body and mind as separate, independently functioning parts of a person… Already decades ago, scientific research showed that we are not made that way. Body and mind are one whole; in very nuanced ways, influences from within and without are constantly impacting how we are doing. However, if we are constantly overloaded, there comes a time when the line breaks: we get sick or otherwise get stuck. This is summed up succinctly by these two quotes from José Al’s “The Soiled Nest” (on pages 148 and 201, respectively).

Early childhood trauma gets under the skin and usually sooner or later reveals itself through the body as a disease. The pain of childhood abuse, neglect, and emotional overload can also manifest as emotional distress or social dysfunction. Moreover, the quotations highlight a very special contradiction. On the one hand, the body sends out signals that should be interpreted as a sign of underlying pain. On the other hand, those who have grown up with trauma are so used to that pain that they tend to ignore it. They will often not consciously interpret them as signals of pain that is stored in the body. 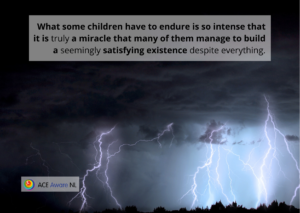 Breaking free from this dilemma is what the trauma healing process is all about. How can a person learn to feel the pain in the body and understand it with the mind? Sometimes the healing starts with feeling in the body and sometimes the recovery process starts with increased knowledge, which helps to properly interpret physical signals. What feels like the safest route will vary from person to person. For those who managed to work their way out of misery with intellectual skills, it will be a challenge to let themselves be guided more by the body (again). For those who have managed through physical complaints to receive certain forms of care and attention that were otherwise lacking, it can be a confrontation to discover that the body reflects trauma through illness. Disease suddenly turns out to be not just ‘bad luck’, but to have neurophysiological explanations. With her book, José Al shows how far-reaching it is to analyse one’s own background and to give life a different spin. What some children have to endure is so intense that it is truly a miracle that many of them manage to build a seemingly satisfying existence despite everything. It is therefore problematic that there is still so much stigma attached to openness about abuse, neglect and trauma. Adults with a wounded inner child especially deserve compassion. In the words of Al: “Let us not forget (…) that a child who survives a soiled nest has to be very resourceful in surviving under difficult circumstances. It is used to persevering when things go wrong and to see opportunities where others might get stuck” (p. 164). With that as a starting point, we, also as a society, can learn to look differently at people who are mentally struggling or who are unable or unwilling to keep up with the pace and demands of society.

The structure of the book

The book is made up of three parts. The first part describes the personal story of the character ‘Astrid’. We become part of her intense life history, in which many events are just not written out to the end.  This leaves the reader with a kind of threat in the air and one can only guess how an event will end – exactly what makes life so complicated for a child in a soiled nest. There is a constant threat and the child is therefore constantly hyper-alert. The child lives continuously in a state of readiness to receive and correctly interpret all signals from the social environment. This may give the opportunity to anticipate what is to come. 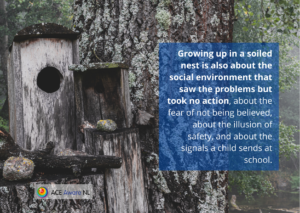 The second part contains, as the author herself calls it, the ‘explanation and substantiation written and approached from my daily practice in psycho-trauma care’. Through a thematic discussion, all kinds of aspects of the life of a child who has or has had to do with abuse and neglect are discussed. Below we briefly mention some of the themes.
Growing up in a soiled nest – about the social environment that saw the problems but took no action, about the fear of not being believed, about the illusion of safety, and about the signals a child sends at school.
Invisible personal boundaries – about a diminished body experience, about privacy being trampled on, and about the continuous silence and the guilt and shame that go with it.
Magical thinking – about the child’s own explanations to understand what is happening, about the cornerstone and the millstone, about role reversal.
Intertwinement with the internalised perpetrators – about the power relations between child and parent(s), about breaking free from those and stopping the inner terror, about the dance between rescuer and victim.
Shame – about shame for the parents, about guilt, about the prohibition of bad thoughts about the parents, about the resulting negative self-image.
Masking myths and blind spots – about misconceptions: about victims, about homes and mothers as a safe place, about abuse as only a phenomenon within socially weaker environments.
Hidden trauma like an inner sleeping crocodile – about the past that keeps catching up with the present.
Grieving for parents you never had – about grieving for what you missed, even when you get better later on, and about carers who give what they never got (out of desire for recognition).

The third part describes the answers to the research questions to a population of two hundred clients. They indicate what it meant to them to have two unsafe parents.

Design of the book

The book is beautifully designed. It is published in hardcover in a handy format and contains beautiful photos. These have a sober, tranquil and yet warm colour scheme, in which the loneliness is almost tangible. This is partly due to the dark tones, which create a sad, heavy atmosphere. Throughout the book, many poems are included that poetically articulate aspects of the subject matter discussed. What would be nice is an added bibliography and a keyword index.

You do not have to be a professional to absorb the contents of this book. The language is accessible and makes the sadness and pain very palpable. This effect is partly achieved by the liberally applied metaphors in all kinds of passages. For example, Al speaks about restrained anger that malignantly proliferates in the body in the form of tumors (p. 37), about furniture and crockery that is destroyed by an aggressive parent as if by a whirlwind (p. 74), about wanting to disappear down the drain, because you feel so vulnerable in front of your father who suddenly stands in the shower facing your nakedness (p. 85), about lack of respect for your personal boundaries that feels like uninvited strangers going about their business in your home (p. 125), about the experience of all-enveloping uncertainty that hangs around the child like a heavy grey coat that cannot be taken off (p. 131). 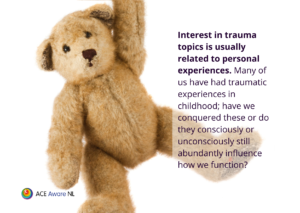 Interest in trauma topics is usually related to personal experiences. Many of us have had traumatic experiences in childhood; have we conquered these or do they consciously or unconsciously still abundantly influence how we function? How are you aware of these in your role as a parent, partner, teacher, caregiver, police officer? How do your own (unprocessed) experiences play a role in your contact with and expectations towards other people? How does the neoliberal society judge people who find life complicated and get stuck on the high demands? What does it mean to conclude as an adult that your parents did not want the best for you? Or did they, but was their reality based on their own traumatised background?

The book raises a lot of questions and provides a lot of food for thought. One thing is certain: it is courageous for people to tell their story, no matter what position they were or are in. This often calls for a certain amount of letting go of loyalty towards parents who soiled the nest, who could not offer their child safety and a loving start. Also those who have not experienced serious sexual abuse by both parents, but who have often felt unsafe and insecure at home, will recognise many things. This can nurture insight into and compassion for one’s own life history.

For professionals, the book is also a powerful statement: when you fail to make the client or patient feel safe and secure with you, when you fail to see ‘beyond your own blind spots’ (p. 110), when you do not dare to ask the hard questions, you risk adding instead of healing trauma. Your courage, your commitment and your gentleness in dealing with survivors of abuse, neglect and trauma can be a vital factor in their recovery. When you dare to let yourself be touched by what has crawled under their skin, a real connection can arise between you and your fellow man… and perhaps between you and your own inner child. This book provides a wealth of material for this, and the invitation to ‘dare to look around us with a broader view’ seems more than worth accepting!