Last week we got a first glimpse into the work of Social Psychiatric Nurse Carla Brok. Today we will discuss, among other things, what she experiences as the essence of her work.

We ended last week with Carla’s statement that she feels she did not make things easy on her parents as a child. This is a comment many children make when at an adult age, they look back on their childhood. Other variations are: ‘I regularly had my ass kicked, but I really had it coming; I was to blame’ or ‘My parents sometimes had really loose hands, but that was no wonder, because sometimes I was unbearable, so I get it.’ I continue to have a hard time listening to these qualifications and forming thoughts about it. What can we deduce from it if a child interprets its own past behaviour in this way…? If it entered the world with this idea, how has it affected the child’s self-image and what are the consequences for functioning as a person?
I look at Carla and say softly and with a smile, “… but they didn’t make it easy for you either, did they?” She can agree with that: “No! No, no, certainly not… All kinds of patterns came up there, that have also been repeated later on, but to which I was more alert by then and I could handle better. I am someone who wants to stay true to herself and there are many things where I am not willing to compromise. The fact that I left home so early for my training certainly helped.”

Yet she sometimes looks back on that training time with mixed feelings; when she tells others about what she went through in psychiatry in the late 1970s, they sometimes get cramps in their stomachs from the fierceness she was dealing with: the raw seamy side of life, which requires resilience and skill that you actually have not yet been able to build up at the age of 17. “I don’t wish that on anyone; as a society we should not expect all this from young people in this way, because that can easily be traumatic for anyone standing by, watching it and wondering: ‘What are we actually doing here?’ I learned a lot and I am grateful for that , but that could also have been done in a different, more compassionate way…” Carla tells about the different psychiatric trends over the decades, how they changed from much to almost no medication, from forced procedures to antipsychiatry (where the idea is that the medical model focuses far too much on ‘deviant behaviour’, is too stigmatising and should hold more space for the ‘non-average’ person), and from nursing to sociotherapy. For some time now, Carla has been working in outpatient, specialist mental health care with parents and young children and I ask how she would describe the essence of her work. She says that she is now more involved in policy development and how everything should be organized. “I specifically focus on how care is arranged for parents and children. Children always have my immediate attention and from their perspective I look at the adult.” When I show that I am surprised, she admits that such a vision is indeed still far from being the standard. She ponders a bit and continues: “I think I am in a different phase in my life now, in the phase of generativity, in the phase that emphasises sharing, and that is how it feels. What I am allowed to pass on is, among other things, that wisdom of … ‘folks, we must be more focused on the children and see the world and what we do as adults through their eyes’. That is my drive.” She laughs and says that this is the shortest description of what she is doing and what she has to do so that, on their life journey, the young can take the wisdom learned by the ones already older.

I indicate that I do not know the term “generativity” and Carla explains that it is a concept from psychoanalyst Erik Erikson’s stages of personality development. It is the phase in which you pass on acquired wisdom to the younger generation, as your legacy. You can see it as a life task that fits the later stage of life: “Before, when working with parents, I often felt more like a co-parent; now my clients see me as a grandparent and that’s fine.”
She explains how it is helpful that she was once trained to always look at the relationship: “What I see is a reflection of what is behind the behaviour and so I can almost read the child based on the story of the parent.” 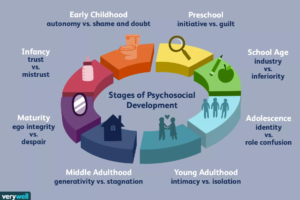 Now she is on a roll and tells enthusiastically about how she supports colleagues through intervision, about the life stories that are sometimes so harrowing, about the invisible pain that lies hidden under ‘inadmissible’ parental and child behavior. She talks about how parents sometimes form an image of their child that is disadvantageous for the child and that does not correspond with what she, as a professional, notices in a detailed observation. This can lead to painful situations, in which the professional must really initiate actions that prevent the parental trauma from leading to a young child growing up lacking continuity in care, and developing a disorganised attachment style. That is difficult, precisely because Carla always strives to not separate parents and child from each other. In order to protect the child, she sometimes really has to take a stand, such as when mutual respect and joy appear to be missing from the relationship. She experiences micro-observations (extensively reviewing and discussing interactions recorded on video) as a very valuable tool. This method enables her to guide a practitioner through supervision and to identify what can be observed in the interaction and relationship formation between parent and child. Is the child really seen by the parent? Are body movements and eye contact properly interpreted? Does the parent see if the child is avoiding or withdrawing from contact or is not really absorbed in the relationship? What does the professional see and what does that mean? Is that really about what can be observed or does it have to do with the professional’s own views and fears, with the story we tell ourselves when we have a hard time understanding ourselves and the other? Can the professional reflect on their own experiences or feelings and how they colour the interpretation of parental behavior? These are intense, difficult, and often uncomfortable questions about one’s own thinking pattern, about what we think the other thinks, about what adults think in relation to the baby or the child. 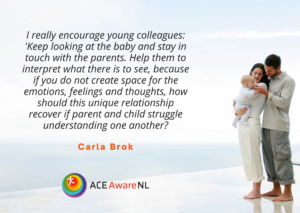 Carla: “It is very important to first really visualise the body language without judgment. A naked child who sucks on his own hands or fidgets in his own crotch is engaged in self-regulation. If a parent does not understand this and (as a result of certain normative views) only corrects that behavior, but does not see the underlying need, this usually leads to insufficient co-regulation between parent and child.” She explains that it is important to investigate whether the parent can mentalise, can relate to the child, can learn to see what is going on in the baby. “A child who looks away asks with his body: ‘Mom, what are you actually doing?’ or ‘Do you see that I’m gone for a bit?’ If you take a step back and just look at the baby… what do you see, what do you feel, what do you think? I also really encourage young colleagues: ‘Keep looking at the baby and stay in touch with the parents. Help them to interpret what there is to see, because if you do not do it, if you do not create space for the emotions, feelings and thoughts, how should this unique relationship recover if until now, parent and child struggle understanding one another?’ This is what matters, not the normative judgments or the thought patterns of the health care provider.”

Next week we will look at the importance of taking the full context into account in order to make an accurate estimate of what is going on with a child or within a family.