She approaches me because she is concerned about their seven-year-old son. Things are not going too well. The young human under their wings does not seem to be able to show his happy spontaneity well lately. He complains a lot. Seemingly very ordinary requests evoke resistance almost in advance and he often looks sad and dissatisfied. Together, the parents are aware that there is a real chance that this has to do with issues they themselves struggle with, but they cannot get a grip on them. They would like to have a conversation, so that together we can look at where this might come from. What does their child mirror to them? Could it be that their parenthood is subconsciously coloured by their own pain and that their son is returning it? What could they do to heal that pain and bring more lightness back into the relationship with themselves, each other and him? These are big questions, so we try to create a situation where we have plenty of time to explore together. 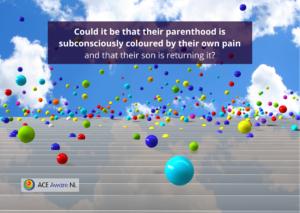 Due to the distance from where I live, it takes a while for us to find a suitable moment, a moment when they can both be present and talk freely, without having to hold back for the sake of their son in what could become an intense conversation. In the end we decide that I will arrive and stay with them the evening before the consultation. I am late due to my other appointment and, wet from the rain, I enter the spacious living room, which exudes a pleasant atmosphere with plants, earth tones and warm lighting. How special, to get to know each other already! Their willingness to give me hospitality and my willingness to literally bridge the distance feeds our mutual trust. We discuss that it should be much more often the case that when you are struggling with something, you invite someone to help into your house, in your place, in your world, where you are at home and the other is a guest. With a consultation at your home it is easier to maintain your autonomy. Then it is clearer to the person who comes to support you that their role is based on humility, not on authority, despite the knowledge and expertise they bring with them. After all, what matters is the awakening of your inner knowing by the person who is your guest.

“Is that professional?” someone had asked me the day before, “staying with your clients…?” It was a question that confused me. It did not seem important to me – or maybe it did, but vice versa. I had already had extensive contact and did not consider it a problem. Moreover, the proposal had come from the clients themselves and all I had to do was accept the invitation. The question alone made me realise that we have built clear pictures of what a ‘professional contact’ looks like and that certain forms do not seem to fit in there, even though they might lead to a better result. 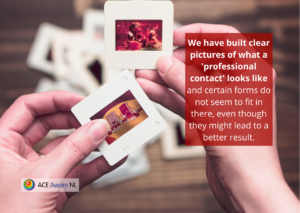 I also realised that we have institutionalised care for our loved ones enormously: with a request for support, you go to an office or a clinic or a treatment room, where the relevant care provider or expert holds sway. Maybe the smells and colours in that place do not appeal to you or the physical environment evokes sad memories or bad associations. In that case, you are right away not quite your relaxed self – you start out with a backlog, as it were. And so I also realised that the changes required for many settings involve a lot more than we often think. As a grass roots organisation and in consultation with the client, I can make decisions about such matters as I see fit and that made me happy and grateful.
When my wet coat hangs on the coat rack, the three of us drink tea. We talk about anything and everything and experience this special start of the consultation as a very beautiful start. When we get up the next morning and go to work together, there is already more familiarity than there would have been if I had just arrived.

We start with a moment of silence, to feel how we are all present, what emotions and physical sensations we bring to the things we are going to explore together.
We evaluate the exercise and we make an inventory of what Anja and Peter experience as the biggest bottleneck. They can articulate that easily: their son has recently been more dissatisfied than seems appropriate for a seven-year-old child. The communication currently contains a number of recurring elements: “I don’t feel like it”, “No, I don’t want that!”, “I think you’re stupid”, “I am never allowed anything”, “You are boring”, “No, I don’t go to bed, because I still want to play outside”, “I don’t like that”, “I want more candy”, “Why do I have to put on my shoes?” During the hours that we are in conversation, all these statements come up and it is understandable that the parents get tired of them and are sometimes confused about what can or should change. I understand that very well. And yet… I also see it as a gift that David still expresses himself: he shows that something is wrong with the family system. Apparently they also offer him a lot of security, because he is not afraid of Anja and Peter, but confronts them. The question is: what does he want to say? What deep, painful beliefs in his parents does he appeal to? And also: is there a way in which it becomes easier to let go of the negative judgment about his behaviour and to look for the emotion behind the behaviour and for the need behind the emotion? It is hard, of course, and Y says he thinks it is mean to say things like that: “If you say something like that to an adult, you hurt someone really bad.” I ask if that is really the case. If I said something like that to Y, would it hurt him or would he feel hurt… and can he tell the difference between the two…? When people say things to us or about us that we clearly know are not true, can we let that slip away from us…? Or does the difficulty lie in the fact that they say something about which we are already unsure? What is it that lies dormant in ourselves that is touched with a ‘shitty remark’? Anja and Peter think for a bit. We look back at the conversation the night before, in which they took turns indicating they are currently on a personal quest, with a feeling of standing still in their personal development. They are not really thriving yet, have not yet found their purposeful destination. There are very valid reasons for the restlessness and sadness. A very important one is that they were longing to have a second child and that, after a number of miscarriages, a difficult IVF process ended in disappointment thirteen times. That hurt a lot; that has tested their patience with each other and their son: “We really had a short fuse then…” They are mourning about this, also about the fact that he was still so small and could not really count on their happy attention to build his foundation. They have not told him the story about this yet, but the question is whether he might not already know it on a deeper level. Perhaps on his own he is doing his incredible best to mirror to both his parents what is still an open wound with them. What is called ‘acting out’, is usually about sadness, about bringing to the surface what is inside and cannot be put into words.

Because images sometimes speak louder than words, we start with a visual step. There is something special about the pictures they choose: the three of Anja align wonderfully with the three of Peter in a way, and it is touching to see that with all the imbalances currently felt there is a match between their choices. That does not solve everything, but it is hopeful to see the connection.
After this they, they both lay the systemic method, Het Mattenspel (The Mats Game), on the table, after we have discussed that they can both be present at each other’s laying, provided they can give the other room in silent presence. Both are okay with that and I pull out the game.
They both lay with care and dedication; the process visualises things that were already alive at an unconscious level, but it releases tears now that the confronting visualisation is on the table.