It was a Thursday afternoon and I was in a store when she called. She wondered if she could ask me a few things, because the feeding was not going so well and now she had a hard spot in her breast. She had already been to the doctor and he had prescribed antibiotics for her. When, as always, I immediately asked if she had already started the course, she replied, to my relief, that she had not. My reaction seemed to take her by surprise and we talked about what was going on and what she could do. We made some provisional agreements on that basis, including that she could come to me that evening to get a bottle of Phytolacca to support the lymphatic drainage of the breast. It seemed that there was a sterile mastitis (inflammation) and not a bacterial problem (infection, for which antibiotics might be desirable). In Dutch, we often talk a bit casually about ‘ontsteking’ without making a good distinction between the two forms and it is important that prescribing physicians identify with their patient which of the two is most likely. After all, you do not want to use antibiotics if you don’t have to. The reasons for being extremely cautious about this are in the area of prevention: antibiotic resistance, disruption of the intestinal flora in mother and baby, thrush in the baby, candida in the mother, and… at least as important… loss of self-confidence. When the belief takes hold that the body is a flawed vehicle, requiring all kinds of outside tools to make it function properly… then the power a woman experiences as a mother in the relationship with her baby can be damaged. For that parent-child relationship, the foundation in now being laid and it is important for that relationship to become strong and resilient. It will then last a lifetime and become a home base for the child, a refuge and a source of compassion, support and wisdom on the life path the child will take. As health care providers, we should not take this lightly, because inflicting no harm is the core of the Hippocratic Oath. It is therefore important that we do everything we can to recognise, acknowledge and reinforce the self-healing capacity of a young mother. 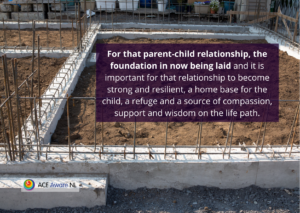 And even if there is a fever, there is no need to panic right away. Inflammation also has the four classic symptoms: calor, dolor, rubor, tumor – heat (fever, glowing hot spot), pain, redness, hard spot. Good policies and possibly support from herbs and homeopathic remedies you usually go a long way. However, the most important thing is: why does this person have these complaints at this moment? Those are the questions that deserve a real inquiry and the answers in many cases lead to something much deeper and older than the events of today and yesterday.
That was my goal for the next day, when I would almost certainly be able to come for a consultation with her, although there was still some uncertainty on my side due to other obligations.

In the evening around 10.30 pm it turned out that I could indeed be with them around 9.30 am the next day: she was happy! It was nice to meet both parents at home the next morning with their beautiful ten-week-old child. We went through the intake form together, which stated, among other things, that there were migraines and blood pressure problems. During the pregnancy she had had virtually no migraine complaints. I asked if she knew there was a link with stress and she eagerly jumped in – she knew that all too well. I probed; I asked if she remembered when it had started. She dug into her memory and related some things to her hometowns. I lost track and we made a list of her movals —too many in too short a time, really, given her age. She sighed, looked at me, smiled hesitantly and with shining eyes: “I went living on my own at my 15th because I could no longer bear the situation at home with two parents who were alcoholics…” I nodded and held her eyes : “Ah… I see…” The three of us were silent for a moment. 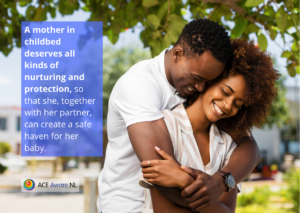 When we took up the thread, we went through the rest of the intake form. They told how the birth had first become a series of complications, during which she had completely lost her sense of control. Once at home, they had a maternity nurse who, together with the intern, spent more time on their own breaks than on caring for mother and baby. “I would like some fruit,” she had asked one day, and the answer had been that she could prepare it herself, so that she could practice doing everything by herself again. After about five days, even the meconium had not been washed out of the baby’s ears… My heart broke – a mother in childbed deserves all kinds of nurturing and protection, so that she, together with her partner, can create a safe haven for her baby and master the feeding and care of this new little human.

The little one reported for a feed. I washed my hands and mother settled on the couch with her baby. She exposed her aching right breast and together we watched the wound that was healing there. She had taken up the instruction to treat the hard spot with an electric toothbrush a bit too fanatically and had not noticed that she was damaging her skin. “I have a pretty high pain tolerance,” she said, slightly apologetically, and I noted with a soft wink that perhaps the time was right now to treat herself with a little more gentleness. Her high pain tolerance had carried her through difficult years, but now her life was different and she was allowed to gently try to let go of the life-saving survival strategies she once had to adopt.

I explained some things about putting her baby to the breast and tried to support her, but the latch was not satisfying yet. She did it the way she was used to do it and after two tries, her baby started to drink eagerly. She looked into the little face and I thought I saw drops of sweat on her nose and forehead. I looked at her, paused, then said, “You look clammy with sweat…” She turned her face to me: “Yeah, true! It is quite warm here!” It was actually not that bad, and she somehow knew that, too, because she continued: “And that we just started talking about everything, that also makes me break out in a sweat. It was all so intense…” There had been parentification: “I was five or six when I already did the laundry in the house…” 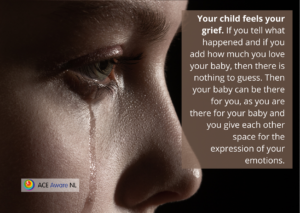 Her cheeks flushed, her lips quivered, the sweating increased, and her eyes were now so full of tears that they overflowed. I stroked her hair and put a hand on her neck. I asked her if she had already told her baby what had happened, not only during the delivery but also in the time before and how many sad memories came up now that she saw her own sweet baby and was even less able to understand why her parents had not been there for her and how painful a loss it had been. “Can I do that…?! Is it good that he knows all that…?” In her voice, surprise and hesitation competed for precedence. “Your baby will know anyway, because your child feels your grief, but if you don’t tell it, your child will have to guess and make up its own story, with the risk that your child will blame itself for your grief. If you tell what happened and if you add how much you love your baby and how you and your husband are going to help your child write a different life story, then there is nothing to guess. Then your baby can be there for you, as you are there for your baby and you give each other space for the expression of your emotions. And don’t be surprised if your baby reacts intensely: looking at you, chatting back, falling completely silent, crying… it’s all possible, but it doesn’t matter. All is well. You are together. All of it can be there. It has to come out, so you can both continue unburdened.” She looked at her baby. He broke out into a laugh from ear to ear and looked deep into her eyes. She smiled back and we cried together.

In the course of the afternoon I sent the consultation report with the necessary tips and suggestions. Later in the day she emailed: “We immediately switched to the holistic general practice and I ordered two of the three books mentioned. We will get started with everything you have given us and let you know how it goes next week. Thank you!”
The power of compassion and holding space… heartbreakingly beautiful.