Recently, in three separate lactation consultations, mothers told stories of their experience that contained sad elements and that touched on ACEs. In this blog, we share a number of aspects.

One mother was unsure about whether the latch of her 7½ week old baby was going well and whether she should change things in the way she handled feeding during the day. “I really want to keep feeding. My sister really enjoyed it, too, and I don’t want to stop just yet, especially because I am self-employed and my job thus allows me to fit feeding into my day, but I keep wondering if I’m doing it right. My baby is a super fanatic drinker, said the maternity nurse, a real piranha!” I felt triggered by these two labels; are they suitable for a baby that has just come into the world…? How do they form the parents’ image of their newborn child…? I asked what made her feel insecure and where the doubts were. She told about her birth experience, in which she had wanted to stay at home, but ended up in the hospital, was placed on her back, had had medication for labour augmentation and in her opinion had to give up control. “I have experienced a strong urge among the care providers to be in control of it all; the care was not holistic and I really wanted to get out of there as soon as possible so we could do it our own way at home. All kinds of things have happened that I specifically did not want, such as an electrode on the head of our unborn baby and it was said that he would not feel anything. I felt there was a hierarchy and my baby and I were not at the top of it. They were talking *about* us, not *with* us. I didn’t want an epidural, but I did get a pitocin drip nevertheless and eventually a cut had to be made. In short… a lot has happened and I now feel that I still have to find my way at home.” We discussed everything extensively and I could confirm that she was completely right with her intuition and that she did not have to imitate the compulsion she had seen to control everything, but could rely on her child and their mutual relationship. What a reassurance that was for her… the sheer relief brought tears and she nodded vigorously at the things I described as good for her baby: cuddling, feeding abundantly, not letting them cry… That was exactly what she wanted and actually deep down also already knew. During another consultation we had to go over some things which I normally have already taken from the intake form beforehand. This consultation was scheduled so quickly, however, that I had not had time for it. Mother said she gave birth in hospital. I usually ask whether that was also the plan or whether it arose during the birthing process. While talking it turned out that she had had a caesarean section, because various things had gone differently than hoped for. She said she was at peace with that. I looked at her and allowed for a long silence, during which I saw tears welling up in her eyes. “It’s totally okay if you’re sad about what happened. Even if you’re glad the essential things went well, you have every right to mourn what you missed and what you hoped for…” I put a hand on her arm, and the crying grew more intense. The sense of ‘being at peace with it’ was there intellectually, but emotionally it was a completely different matter. Father had also experienced the birth as intense; all sorts of things had happened that he had felt he had no control over and that had affected them both. We went through everything and I encouraged both parents to create lots of hugs and skin-to-skin contact with their baby and thus bathe all three of them in the oxytocin hormone, which is not only good for the breastfeeding relationship, but also has a healing effect. 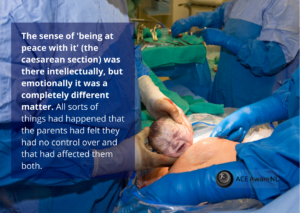 At a subsequent consultation, feeding was still a bit difficult because the baby of about a week old was restless at the breast and did not latch too well yet, so that mother had sore nipples. Together, we went through how she could support and steer her baby when latching on, so that a larger amount of breast tissue would go into baby’s mouth and the nipple would be further back and not get damaged. That went very well during the consultation and the little bumblebee fell into a deep sleep, satisfied in mom’s arms. Mother felt better this time than when the eldest was born. She was born by caesarean section after all kinds of things had happened that the mother had experienced as traumatic: the doula was not allowed to join them in the delivery room, strangers were constantly walking in and out, disrupting concentration, and mother did not feel ‘in control’. After initially having contractions, she was not allowed to push when she was 9½ cm dilated.

When the nurses said it couldn’t go on for more than half an hour because baby was having a hard time and that a caesarean section would follow, an emergency arose in another delivery room. Everyone disappeared, father saw the half hour pass and was concerned about the baby, but no one had told the parents that medication to slow down labour had been administered and that therefore waiting longer was not a risk. All in all, the whole process had been stressful – hugely different from the experience in the birthing pool this time, well prepared, again in the hospital, but in a different town). 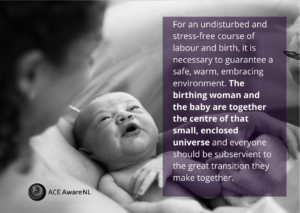 What is touching about these three stories is that the circumstances that the parents are sad and disappointed about and that they mourn, were not inherently related to the natural course. The pain, sadness and disappointment are mainly about communication, about the way in which their wishes were not heard or honoured, about the fact that insufficient attention was paid to the importance of privacy and gentleness. For an undisturbed and stress-free course of labour and birth, it is necessary to guarantee a safe, warm, embracing environment. The birthing woman and the baby are together the centre of that small, enclosed universe and everyone should be subservient to the great transition they make together. Labour and being born are crucial, transformative events in the lives of the parent and the child respectively. They deserve to be surrounded with the greatest respect, so that they are engraved as an anchor and a radiant experience in the mental and physical memory of (especially) mother and child.

We know that ACEs, Adverse Childhood Experiences, can occur very early in life and therefore deserve prevention. We also know that a good birth is a powerful start for the baby and that a beautiful labour experience can heal a lot of old pain for the mother. When she experiences that her body can do something she has never done before, it gives her enormous strength. She takes this strength with her in her parenting role and it helps to build the foundation for the child. Properly guiding the delivery and birth is therefore not only an emotional and spiritual responsibility. It is also simply a matter of salutogenetic, preventive health care. Let’s work together to ensure that more and more attention is paid to this!