Last week we finished with the importance of building a physical, non-verbal foundation for managing stress and emotions. We also discuss the role of breastfeeding in this.
Beatrijs says that two things are important to her when it comes to breastfeeding: ‘I think sex education starts at birth. The baby’s brain is saturated with oxytocin in an important phase, which is good for your stress coping system. And all the so-called nutritional benefits…’ She hesitates, challenges the lactation consultant in me and says: ‘… Fine, sure, whatever!’ Now she is bursting with laughter. She then continues on the value she sees in the breastfeeding relationship between mother and child for later sexual development. “I see sucking the nipple as the first form of kissing, of really close physical intimacy. Following the biological blueprint, a child can enjoy that for two years or even longer. All the while, the child may delight in that breast, the smell and the mother’s body, while its brain is drenched in oxytocin, endorphins, and prolactin. That total delight… and the surrender, the self-regulation, the drinking and meanwhile just stroking it with that little hand… and reaching for the mother’s face and mouth… fantastic! In my opinion, that is the foundation of a sexual education.”

She sees an important learning process for both boys and girls there. “Boys who are breastfed for a long time develop an enormous admiration and familiarity with the female body and its limits. They get abundant amounts of oxytocin and endorphins through the milk and through suckling, which supports a favorable wiring in their brain. Through their mothers , girls can learn to give the same non-verbal oxytocin showers to their own child. Oxytocin is the word – I’m from the Oxytocin Church!” We laugh about it together, because I too am a passionate admirer of this important hormone. 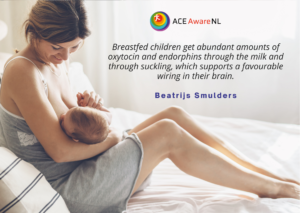 I ask if there are things she found difficult in her job.
“Because of the foundation that I have been given, there is a lot of confidence in my body and I could always use that in my profession. That has always helped me in my work and because of that there are no big things that I found difficult. I did most of it on my intuition and it worked great!”
Yet this question brings her to her own childhood, in which she grew up in a large Catholic family in the province of Brabant. She was the fourth of eight, with a mother who was actually constantly overworked in caring for the children and the family doctor’s practice of her husband, Beatrijs’s father. “The summer I was born, my mother happened to have a very good assistant in the practice and three good maids in the house, which made her feel relaxed and I breastfed longer than the others. So I’ve been lucky enough to have a good base, I think. My mother was a very sweet woman, but she was always overworked and too busy with everything. My father was a real patriarch, who was afraid of intimacy. Although I have enjoyed his intellectual inspiration and my mother’s gentleness and pursuit of personal growth, as children we have sometimes been lacking in personal attention. As a result, self-doubt can sometimes strike enormously under high voltage.”

Another major traumatic event in her young life comes to her mind that has affected how she handles things. As a four-year-old girl, she got viral meningitis and not just herself, but all the children in the family. At first they were all isolated, but when some of the kids were allowed to go home and she was left with her little brother, she didn’t see her parents for weeks. She and her brother thought their parents had forgotten them; they felt utterly abandoned, were unable to walk in the end, and only had the comfort of each other’s closeness. When they were picked up and brought home after six weeks, everyone seemed very happy and that didn’t match at all with how she felt. “I think that was my first depression. I imploded to survive and in difficult situations in my life I still find it hard to deal with those emotions. I can hold on for a very long time, but if everything goes wrong and it really doesn’t work out… then I have to be careful that I don’t implode.” 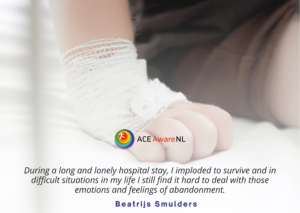 She says she got a nasty knock from it at the time, but was still able to develop well because she already had the strong foundation of the years before. In this context, we talk about how she views the importance that is attached in the Netherlands to those early years of life. Beatrijs: “I think this is not seen enough. This is evident from the duration of women’s maternity leave. Some feminists often call me out on this: ‘There you have Beatrijs Smulders again with her sow leave!’ They make a swear word of it! I think the lack of continuity of care in childcare for small babies is harmful.”

This topic touches on the idea of ​​safety or lack thereof and I ask her if she knows the concept of ‘toxic stress’.
“Most certainly, yes! What I understand by this is that a child goes through drastic things and experiences severe stress and does not have the tools to absorb that stress and cannot turn to their parents for this. We need a certain amount of adversity to grow. That is inevitable; that’s how evolution works. Children are born as fragile gold nuggets and you should try to keep them intact for as long as possible. The development of our stress coping system through the protection of our parents is of vital importance. However, parents can’t keep protecting you, so you also need to develop a healthy ego that fills that function later in life. And when there is a setback, you hope that your stress coping system is strong enough on a fundamental level to allow you to grow through it. Sometimes you don’t succeed. Then people break. Women who were abused by their father as children… that is something a child can hardly cope with. Then you close and break and it takes a lot of effort to become whole again. The insecurity you experience as a result will affect the rest of your life.”

I explain that trauma is also described as a deep wound in the mind, a broken connection with the self, and loss of authenticity. When a wound can heal properly, there is less scar tissue. This is important, because the properties of scar tissue are that it is not so flexible, that it does not grow like the rest, that it puts things under tension when everything else does grow, and that it has few nerve endings and therefore lacks sensitivity. These are characteristics that can also become visible in the personality through trauma. Beatrijs sees her trauma from the hospital as a scar: “Fortunately, the rest is so healthy that I can live with it! But people are vulnerable and sometimes you only have to hear three times in a very vicious way that you are worth nothing and then you are already traumarised somehow, because your sense of security is damaged, which can have major consequences. Then it comes down to the strength of the early foundation to get you through.” 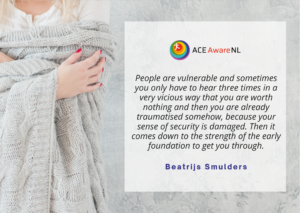 Finally, we discuss briefly what Beatrijs considers important for the policy for a good start in life.
“I think the autonomy of midwives in primary care is very important, so that they can continue to practice their wonderful profession and continue to support pregnant women and women in labour. Across the board, I think it’s time that women get to play a bigger role in society and work towards change. Unfortunately, women do not always have access to that power; they are sometimes put up against each other in unsolidary ways with the wrong means of power,  and are not raised and socialised into supporting other women in making a head start and rising in the speed of nations. But things are getting better; luckily there are hordes of women ready to take on a role as change agent in society, women who can make a world of difference for newborn children!”

We wrap up; I thank Beatrijs for her time and the fun we had together. It is wonderful to see that in so many disciplines, there are champions who advocate for the importance of a healthy, safe first 1000 days in a human life. Through her book ‘Blood’ people can get an insight into the start of her life as a midwife. In time, the second and third parts of the trilogy will appear, parts that Beatrijs is now working on daily.