The sun is shining when I arrive at Amsterdam Central. I open my folding bike and ride across the busy station square on the center side towards the Prins Hendrikkade. Just after the Odebrug, I turn right towards the canal house of today’s interviewee. With my now folded bicycle I climb the eight steps of the stairs to the front door. From behind the wrought-iron gate around the platform at the top, you can look out over the ships moored in the canal and the buildings on the other side of the water. I ring the bell at the left of two identical mirrored doors with beautiful wood carvings, both of which have brass letterboxes a third from below. The top two thirds consist of an opaque relief glass window decorated with a cast iron artwork with flowers and circular curls. To the left of the door on the wall, which is covered with white glazed tiles with flowers in two shades of blue, hangs a small glass case altar with prayer candles and a statue of the Virgin Mary. After I ring the bell, I hear firm footsteps on the floor in the hall. Then the front door opens with a swing and a broadly smiling Beatrijs Smulders stands in front of me. She welcomes me warmly and after I have parked my bike in a corner, we walk across the white marble floor through the long corridor to the back, to the spacious kitchen where we already talked to each other before. We chat for a while, while Beatrijs makes tea and then we get started. I would like to hear from her how she got into this profession. That is currently a much discussed and widely read story, because the first part of the autobiographical trilogy she is writing has recently been released and is entitled ‘Bloed’ (‘Blood’). She describes in detail her fascination for the profession. “It took me a while to realize this was my destiny and actually I got into it through sexuality. As a girl, I already took a quite cheerful stance regarding that subject; I always carried with me a positive idea about sexual energy. Years later, once I was a midwife, I realised that I actually see a child as the materialised result of sexual energy. You make love together, which leads to conception, and essentially that is a form of love that is being materialised through sex – the most precious thing you can have, the connection between two people who love each other and from which a gold nugget emerges. I sometimes have a discussion in my head with Rutger Bregman, who says in his book ‘De meeste mensen deugen’ (‘Most people are virtuous’) that most people are good, but I say that all people are virtuous at birth. After that, unfortunately, much of this inner goodness can be damaged and many people become traumatised. At the moment, I still see a lot of oppression and too much lust for power in society. These are the themes that I have been working on in my profession all my life.

What I see is, among other things, that we are increasingly medicalising childbirth in western healthcare. For many women, this makes giving birth a disempowering experience. That is very unfortunate, because if you guide women in a positive way during childbirth, then birthing a baby is an empowering event, something that makes you experience a positive energy. Then the pregnancy and childbirth work love-unleashing, definitely also when that child comes out of your body. This affects you throughout your life, both you yourself and your child. The hormones during an unmedicated birth help with this: oxytocin, prolactin, endorphins… they help in the development of feelings of love and the ‘love gaze’, the first glance that mother and child exchange when they are both completely intoxicated by that beautiful mix of hormones. The breastfeeding relationship is a continuation of this. For months after the birth, a breastfed baby’s brain and body are marinated in oxytocin and endorphins, the hormones of happiness, connection and empathy. I am convinced that breastfeeding promotes future feelings of empathy in a child. A child who is allowed to breastfeed for a long time, thus receives a gift for life. Such a child is given the opportunity to optimally develop body awareness in the non-verbal stage of life. That helps to enjoy directly what is there, without the intervention of the compulsion of words and thoughts. No mindfulness training can compete with a start like that!” 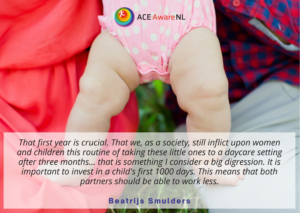 I ask her how she views that good start, what period she associates with it.
“That first year is crucial. That we, as a society, still inflict upon women and children this routine of taking these little ones to a daycare setting after three months… that is something I consider a big digression. It is important to invest in a child’s first 1000 days. This means that both partners should be able to work less, not only mothers, but also their partners, so that partners can support the mothers in caring for the baby. This is important for bonding and for the development of the brain, which grows so incredibly fast in the early years. During the entire pregnancy, the child was in the womb and a sensitive hormonal adjustment has developed, which continues during the delivery and afterwards through the breastfeeding relationship. No one can take over that role; no one can replace that breast. Human children are all evolutionarily born premature; a baby is, as it were, still a larva, which, like the great apes, should simply be stuck to the breast for at least another nine months. Our intellectual, rational, feminist frames say: ‘No! After three months, the child can go to daycare!’ I experience that as the contemporary alienation that women are forced into by the law. I am happy to see that in addition to the mothers, there are also many fathers in the Netherlands who start working part-time when their children are small. That’s great and working from home during the corona crisis has made it clear that much more is possible there than we thought.”

Beatrijs pays tribute to women such as Hedy d’Ancona and Sigrid Kaag, who, once their children were older, plunged into politics and built wonderful careers. She believes that women should have the courage to plan their careers together with their partner and to ensure that both of them devote time to taking care of the children. She realises that not everyone sees it that way, but “breastfeeding is crucial for the human foundation, not only for nutrition, antibodies and bonding, but above all for healthy brain development and a healthy stress coping system. For a long time, that was a statement that could be harshly criticised for, but by now, science has clearly shown how important stress regulation is in the early years, so I’d like to make that point anyway!” She laughs out loud and resolutely bangs her fist on the table. 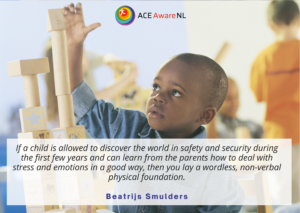 We talk about what Beatrijs sees as the essence of her work as a midwife.
“Well, I see two things… I think it’s important to support and promote women’s autonomy so that giving birth is a sexual, liberating and empowering experience. In addition, I see such a birth also as a way to heal old pain, to become whole, as a woman and as a mother. Becoming a mother is an important process in a woman’s life and when you can do it in an empowering way, it is love-unleashing and a reinforcing factor in your harmony with yourself. And that, in turn, helps in bonding with the child and with the harmony between you and your child. This nurtures the non-verbal bond of trust. You fall in love with your child and that infatuation, that unleashing of love, forms the basis, whatever terrible things can happen afterwards. If a child is allowed to discover the world in safety and security during the first few years and can learn from the parents how to deal with stress and emotions in a good way, then you lay a wordless, non-verbal physical foundation. That is then in your body. You can always fall back on it when you are under stress; you radiate that. It is in the wiring of your brain and that supports a strong stress coping system.”