Last week we shared Part 1 of a dialogue that ACE Aware NL had with Anky De Frangh of ‘Connective Parenting’ in response to an Instagram post. Today you read Part 2.

⁠The accompanying text of the Instagram post continued:
”That [lack of certain skills in children] means that not all tantrums can be prevented, but as a parent you can do a lot to prevent tantrums as much as possible and to support your child in his or her development. Your approach during a tantrum is also very important!”

Marianne: Exactly! This sound like a strikingly apt statement. The role of the parents is crucial in how the child responds to a situation in which the perception of safety is under pressure or in which the child does not feel heard or seen. The mood of the parents also influences how frequently such situations occur.

Anky: And that’s what the entire masterclass and also the emotion coaching course are about. I just don’t tell parents that right at the start. By gently taking parents into the story, they understand the crucial role they play and they are naturally willing to change and tackle things within themselves.

“When children become more emotionally competent and thus learn to recognise, name, articulate, understand and regulate their emotions better, the frequency, intensity and duration of tantrums decrease.⁠⁠ And these are all things that you as a parent can support. ”

Marianne: On the one hand, completely true! On the other hand… children are often much more emotionally competent than adults: they sense flawlessly that something is wrong and then they call for help. However, to clarify what is going on, they use instruments that adults find difficult to handle. The core of this is actually that adults often lack the competencies to understand what the child is saying and of which problem the behaviour or expression is a signal or a symptom. Saying that the child is not yet sufficiently competent, could easily lead to framing the child as an incomplete individual. 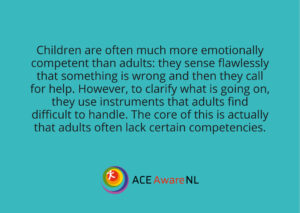 Anky: I can agree with that. The cause of many frustrations, however, often lies in the fact that they do not always have the words to express themselves (and of course this is always in combination with a care figure who does not seem to understand). That is why we also see more tantrums in children who, for example, have a language development disorder. I completely agree that children are better able to sense, feel and allow emotions to be there. It is only in interaction with others that we as human beings ‘unlearn’ or suppress this. There is also a lot of attention for this in the course and I also make room for that on social media.

Marianne: That’s great, because if the child is portrayed as deficient, the role of parental incompetence remains unaddressed. This is ethically difficult, because those who are bigger and stronger bear a responsibility to protect the small and vulnerable. The Convention on the Rights of the Child describes this responsibility in many ways. As an adult, ‘leaning back’ until the child has become ‘more competent’ therefore does not seem appropriate. Adults can explore how they themselves can become more competent in understanding, speaking and connecting with the language of the child. In this way, the parent can indeed support (the development of) the child enormously and offer the child a sense of security that remains of great value for the rest of their life. Thus, parents and other adults can help build a powerful neurophysiological and stress regulation system.

Anky: Sure; in the masterclass we also discuss this in detail!

“Afterwards, you will also receive the slides and some practical handouts with tips about learning alternative behaviour and how you can stay calm as a parent.”

Marianne: The text seems to aim at the child by saying ‘teaching alternative behaviour’. In light of the previous, the question is probably justified whether it is not the parent who has to learn new skills. If flora does not thrive, you do not blame the flower or plant, but the environment (soil, light, water, nutrients). This principle also deserves much more social attention with regard to children.

Anky: I definitely agree that this principle should be in the foreground. That is also the reason that as a child psychologist I work less and less with children individually and focus on the parents instead. However, I also think it’s important to provide a balance for parents who are very strict with themselves or who eventually can’t see the forest for the trees, because there are so many things they ‘have to’ do to make it ‘right’ or that they think they should change about themselves. Marianne: That’s great to hear that you focus on the parents! Important questions are then: ‘What does the child need? Why isn’t it thriving? What can we offer?’

Anky: The majority of the emotion coaching course and the masterclass is indeed about teaching alternative skills and behaviour for parents themselves. A mini-piece is about which alternative you could teach your child (by modelling this as a parent yourself and therefore also changing your behaviour) to deal with big emotions. I very consciously pay attention to this, because parents often have questions about this and that is what the masterclass is intended for.

Marianne: How great! By continuously asking the question of what the child needs, we can prevent Adult Supremacy, a concept that has already been discussed in some of our previous blogs, the position of power in which the interests of the adult trump the well-being of the child.’

Anky: Interesting! If I have time, I’ll read about it; I am really looking forward to it!

We completed the dialogue via e-mail. And with regard to the original post… it contained this text:

“Reminder: Your child’s tantrums say nothing about you as a parent, but say something about the developmental stage your child is in.”

Some brainstorming about this led to a suggestion for an alternative formulation, which Anky was also enthusiastic about:

We exchanged a few more things and this was Anky’s conclusion:

I think we are indeed very much on the same page. I think I am a bit less aware or a bit more casual in my use of language. However, I am convinced that we deal with this in a very nuanced way in the masterclass on tantrums and the emotion coaching course, much more carefully than is possible on a medium such as Instagram. At the same time, I think it’s really nice that the text gave you so much to think about! This way I also get your ideas about it and this way we can both broaden our view and use our language even more consciously for our goals!

All in all, it was a nice exchange with ‘Verbindend Opvoeden’ and the next day Anky pointed us to the new Insta post: “Helping your kid to manage their emotions requires you to learn to manage yours first” with a beautiful caption. How wonderful and encouraging to keep getting to know accounts and the people behind them who are committed to treating our youngest citizens with more gentleness through the healing of the adults! Who knows, maybe we should also join Anky’s masterclass…?