ACE Aware NL recently got into a conversation with Anky De Frangh, child psychologist and behavioral therapist from ‘Verbindend Opvoeden’ (‘Connective Parenting’) following a message on Instagram. In her post she shared the following text:
“Reminder: Your child’s tantrums say nothing about you as a parent, but say something about the developmental stage your child is in.”
That statement got us thinking. Can we safely say that a child’s tantrums say ‘nothing’ about you as a parent? Could the tantrums also speak about something other than the developmental stage? And whose stage of development is it – indeed the child’s?
We decided to get in touch with Anky and that resulted in a captivating exchange about the image and the accompanying text. After mutual consultation, we would like to share the dialogue with you! We think that it is very valuable to question each other about shared insights and use of language and thus get to know each other better. In this way, professionals can learn from one another, and can use and pass on each other’s work for the greater purpose of offering children the safest possible start.

As promised, I’m sending you my thoughts on the image and text.
I look forward to getting to know each other and talking further to see if we can support each other’s goals, because my impression is that we are essentially on the same page!
With kind regards!

Hi Marianne,
Thanks for your feedback! I also think we are on the same page. Your approach as a parent during a tantrum is indeed extremely important. I have supplemented and explained a number of things in your comments to the text. I think it would be fun to do a video call some time!
Sincerely!

The accompanying text of the Instagram post was what the exchange was mainly about.
“On average, a child between the ages of 18 months and 5 years has 1 tantrum a day, with an average length of 3 minutes. (These are averages, of course! Kids can have more than 1 tantrum a day and they can last longer than 3 minutes. And not all kids have tantrums every day.)”

Marianne: It frightened me, Anky; if true, those are staggering numbers. Do you know what those numbers are based on? I am curious about how and with which definitions the research was conducted, because that can have a lot of influence on the conclusions.

Anky: I base the figures on this overview article. All references can be found there: https://www.ncbi.nlm.nih.gov/books/NBK544286/
When I do a poll in a workshop about the frequency and duration of tantrums, it appears that the answers of the participants are very close to this!

Marianne: Actually, the word ‘tantrum’ made me quite sad right away. As adults (and certainly as health care providers, policy makers, writers and influencers), we might consider taking a closer look at our language use. We can seriously ask ourselves whether we really want to label what we are referring to with the word ‘tantrum’.

Anky: Good question! Although I don’t experience that negative connotation myself, I realise that this is of course subjective and can therefore be different for everyone. I also think it is important to match the language already used by parents. I think that way it might also be easier for them to change their view of what ‘tantrums’ are. By the way, that is also very specifically the goal of our masterclass on tantrums (but people gradually discover that 😉). 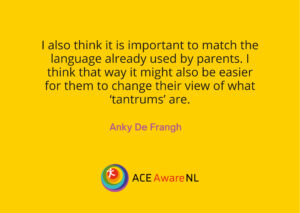 Marianne: Yes, that may be right. My pain is in this… there is a kind of judgment about the child involved, a negative qualification of undesirable behaviour. It remains unclear whether the child’s anger is perhaps justified. Tantrums are often seen as unreasonable and unacceptable behaviour, but that is reasoned from the adult perspective, not the child perspective.

Anky: I think that anger is always justified, because that is a feeling and what a child feels is just his reality at that moment and has a right to be there. The behaviour is indeed seen as unreasonable, or especially not in proportion to the trigger, but here, too, it is of course important to know that the trigger of a tantrum is usually not the cause. It is very important, in my view, to pass that idea on to parents. And in addition, it is good to also make the translation to ourselves as adults, because we also sometimes react not in proportion to the reason.

Marianne: Sure, very good point! I think it is important to look from the point of view of the child, because that difference in perspective makes a lot of communication and advice around parenting problematic. The child and its behavioural, social and emotional expressions are often looked at from an adult perspective. I think by doing so, we can easily overlook a lot. What emotion is underlying the behaviour or the way the child expresses itself? And of what unmet need is that behaviour a logical and justified signal or symptom?
Recently we heard about this little dialogue:
Child (almost 4): “Mommy, is the tidying up fiiiiinally done?”
Mommy moments later: “Look, honey, that’s why it’s taking so long: because you’re all making a new mess even while you’re cleaning up.”
Child: “Yes, that’s right!”
Mom: “Well, not in my world.”
Child: “But that’s your world!”

Anky: I definitely agree with that. My mission with ‘Connective Parenting’ is therefore very much to help parents to make the translation and to look at it from the perspective of the child. It is important to look just a little further than the behaviour and find out which emotions and (unmet) needs are underneath it. This does not only apply to the child, but also to the parents themselves. I constantly try to translate from child to parents and also help parents to better understand their own reactions. That’s what it’s about: connection with your child and with yourself!

The caption continued as follows (see the italicised passages):
“So tantrums in young children are very normal! Toddlers and preschoolerspre-schoolers want to be independent, but at the same time they also have a great need for the attention of their parents. That makes it difficult to know exactly what they want. They want to try new things but not everything goes the way they want it because they are still learning everything. They also do not yet have the necessary skills to deal with or speak about their emotions in a good way… the ideal recipe, therefore, for frustration and tantrums.”

Marianne: Here, I noticed the word ‘normal’, a word that I think deserves caution. There is a distinction between ‘normal’ (in accordance with the standard) and ‘common’ (a fairly high frequency). Anky: I can certainly agree with that. I’ve never thought about it that consciously, but that’s definitely something to do more in the future. I think I want to refer to both meanings in a certain way, including the ‘common’ aspect anyway. I notice that parents are often very concerned, while that is not always necessary. I also notice that parents who do a lot of things very well, still feel like they are failing when their child still throws tantrums from time to time. In addition to informing parents about the development of children and what you can expect as a parent, how you can look at behaviour differently, I also really want to reassure parents and give them confidence where possible. That is sometimes a thin line… In the masterclass, there is also conscious attention for this: when are tantrums worrying and no longer ‘normal’?

Marianne: In western societies, many behaviours, like many pathologies, are common, but in fact not normal, not in line with the biological norm or blueprint. Many behavioural and health problems are socially constructed; they are related to and based on socio-cultural conventions and customs, beliefs and ideologies, institutions and practices, laws and rules… you name it.
The fact that children are not yet able to say something about their emotions in words does not necessarily mean that they cannot deal with them well. They probably can do that… as long as the prerequisites inherent in the human biological blueprint are met. At its core is adequate co-regulation by parents who are able to properly regulate their own emotions. It is important that they face up to and overcome any trauma. If parents understand what their child is going through and respond patiently, a child’s anger is usually not too bad. And of course this is quite a task for many parents and a child can nevertheless sometimes be very angry and unreasonable (who wouldn’t? 😉). It is also good to talk about it with each other, without guilt and shame, so that parents can increase their skills and heal their pain. However, putting the problem on the child’s plate (or any other person’s) does not solve the problem of the underlying pain.

Angie: Sure! I totally agree with that!

Meanwhile, the video call took place and we had a beautiful conversation!
Next week you will read Part 2 of this dialogue.