Every now and then, you may come across a news site or a parenting blog publishing a piece with an eye-catching headline like “babies who don’t sleep through the night, are more likely to have behavioural problems at age 5″ or “Should you let babies ‘cry it out’?”  The articles move on to explain how a new research has shown that.
A recent example is this article, discussing an academic study in which the researchers followed 1679 families in Finland. They concluded that in their study population shorter sleep and poorer sleep quality in infancy seemed to be related to emotional and behavioural symptoms in toddlers, and these associations were strongest for internalising and dysregulation symptoms.

Your children’s sleep… for you as parents this can feel like a pretty ‘hot topic’. On the one hand, you are getting the cultural message that sleep can be taught, that you need to micromanage it to get it right (with early bedtimes and uninterrupted sleep). On the other hand, you feel the intuitive need to respond to your child’s crying and soothe them when they are upset. You can easily feel overwhelmed with these mixed messages. Is it helpful for you when infant sleep is being discussed without a definition of what are biologically normal sleeping patterns? Would it not be much more helpful for you if you could compare your baby to the biological norm?

How do we define biologically normal sleep?

Cultural practices and the interpretation of baby’s behaviours change more quickly than human biology and physiology. Fields like evolutionary biology, sociology and anthropology try to define what can be considered ‘normal’ in the sleep behaviours infants show. According to these fields, breastfeeding and sleeping in close proximity (cosleeping) are biologically normal. Just like other animals, humans have evolved to thrive when being close to each other and when forming social bonds with other members of their family and their tribe. Adult (parental) closeness is the primal way for babies and infants to feel secure and to prevent toxic stress. The experience of having a sense of secure belonging is very important for babies. They are in a stage in their development when they are laying the foundations for biopsychosocial health. Everything the adults around them can do to prevent toxic stress, has huge relevance for their later health and wellbeing and helps to prevent ACEs and trauma. Other fields, like medicine, pediatrics, psychology and sleep science, have also tried to define what sleep behaviour “should” look like in an effort to define normality and seek out pathologies (sleep disorders or suboptimal sleep habits and routines). Until the 20th century, sleep was not considered to be a concerning issue. Families would either not consider night wakings to be problematic, or they would seek advice from the previous generations or their peers. With the shift towards science and technology at the end of the 19th century, ‘parenting experts’ (pediatricians and nurses) started publishing parenting manuals that would advise parents to follow strict feeding and sleeping schedules. By the 1930s, the rise of behaviourism in psychology, as well as the introduction of formula and cribs, shifted the norms of what infant behaviours looked like.

Taking formula fed infants, who were sleeping in their own crib or in another room, as the norm, scientists started to describe their sleep habits as the ideal. That data was replicated by other studies that confirmed the first ones. This means that for decades, infant sleep has been studied not with the biological norm in mind (cosleeping and breastfeeding), but with the culturally defined ideas (solitarily sleeping and not breastfeeding) as the frame of reference. 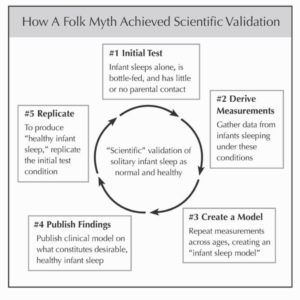 Reprinted with permission from ‘Safe Infant Sleep’ by James McKenna

Another difficulty in defining and measuring what is normal in sleep is the reliability of the questionnaires that parents fill in research where a sleep diary is asked. The problems with this method are twofold.
On the one hand, mothers who are breastfeeding, are more likely to rate their sleep as worse, while mothers that are formula feeding tend to overestimate the sleep (quality and quantity) they are getting. Mothers who are cosleeping, have also been shown to be more aware of their infants’ waking and to follow a similar pattern.
On the other hand, the culture the mothers are born, raised and live in, plays a pivotal role on how they view infant sleep. For example, mothers living in the US and other western nations might view solitary sleep as a way to instill independence in their children, while non-western cultures might consider solitary sleep abnormal, or even cruel. The differences, therefore, between what varying groups of people consider normal in terms of childrens’ sleep, can be considerable.

Going back to the study from Finland, we see a question arise: did the researchers take the anthropological perspective into account and did they consider the cosleeping and breastfeeding norm as “biologically normal sleep”… or did they use the westernised expectation patterns as the norm? 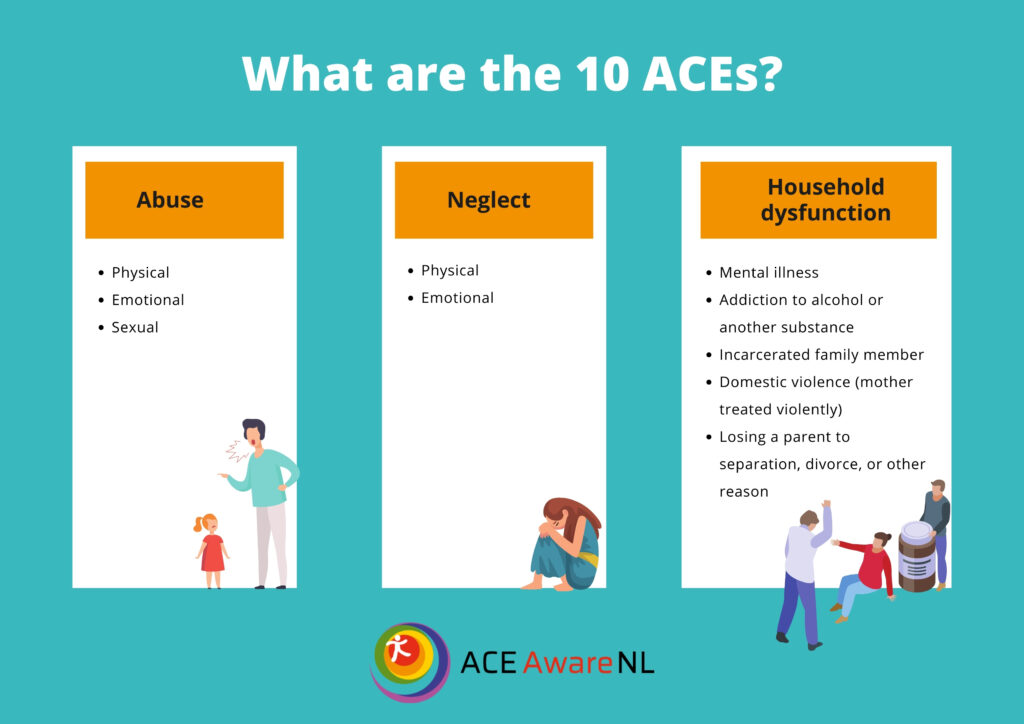 Adding ACEs into the discussion

Going back to the study we mentioned earlier, parental sleep disorders, ACEs or any form of adversity, stress and anxiety were not taken into account in the study design. Could it be that these parents whose children had more sleep problems were parents who were already facing sleep problems themselves? Were they themselves survivors of any form of abuse, neglect or trauma? Was it difficult for them to maintain a stable atmosphere in caring for their children during the day and did this aspect continue during the night? These are some questions worth asking when we want to draw any conclusions on child-parent sleep. The biopsychosocial component may play a bigger role than often assumed. What does this mean for you?

It is important to remember that sleep is influenced by many biopsychosocial factors and one professional field on its own cannot “explain” or “define” infant sleep. Diverging substantially from how we evolved as humans makes any definition of infant sleep debatable. Some key points to look for next time you see a piece on baby or infant sleep appearing on a news site, a blog, or a magazine are the following:

Looking for answers when your baby has woken up once again at 2am in the morning can be very hard. Trying to explain to others that your baby’s behaviour is normal, in a culture that views this as clingy or a “sleep problem” can be physically and mentally daunting. And of course it can also be hard for you as parents to feel exhausted because of regular sleep disturbed nights, especially when your baby cries and when it takes a lot of time to all fall back into sleep. Rest assured, however, that your instinct of wanting to stay close to your baby, is still, to this very day, a wonderful way to respond to your baby and is perfectly aligned with our human mammalian heritage. Try to have compassion not only for your baby, but also towards yourself if you happen to be in the group of parents/caregivers that are healing from their history.