This week, we would like to talk about an important topic, namely the way we use language when we discuss certain themes, especially around health issues.
The importance of language and its influence on how people perceive or understand a topic or a concept was first consciously and piercingly brought home to me by Diane Wiessinger with her article ‘Watch Your Language’. Years later, another beautiful talk on the topic was given by Karleen Gribble. Both women speak about breastfeeding as the biological norm to feed babies and how breastfeeding is instead often described as ‘healthier’ and ‘lowering risks’ and ‘increasing intelligence’. This comparative shows that breastfeeding is compared to something else, which is apparently considered the norm, although not explicitly. The hidden norm in these kinds of wordings is artificial formula. When we speak in terms of ‘breast is best, is the gold standard, gives improved outcomes and enhanced development… we imply that breastfeeding is the ideal, offering all kinds of extra benefits. Because no one is perfect, however, the normal (or the hidden norm) is formula.

Last year, in August 2020, Diane Wiessinger gave a presentation in which she delves even more deeply into the ‘watch your language’-idea. She explains the basic rules of science, such as the difference between the control group and the experimental group. The control group is the group that has the normal biology and has nothing done to it. It is never the focus of the study. The focus is always on the experimental group, the one that gets an intervention, has something done to it, and then shows a variation, a deviation from the norm of the control group. It is in statistically describing this variation that using the wrong norm gets really tricky. Look at the image below. 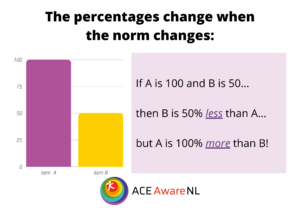 If we say that healthy practices reduce the risk of something by 50%, we in fact say that unhealthy practices increase the risk of that something by 100%! In other words: the numbers in the message given to the reader or listener, depend on what norm we use. Researchers, policymakers and healthcare providers probably do not intentionally try to give a deceiving picture of certain risks, but that may nevertheless be the result of the way the language is used. This turns informed decision making into a very difficult process. Therefore, the mechanisms of wording in a specific way require some solid philosophical and ethical thinking with regard to what we consider the norm in a specific field and how we, subsequently, speak about it. 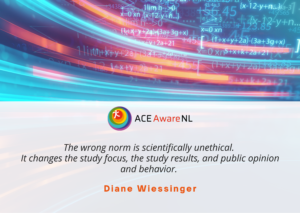 How come, that we often tend to use wordings like these…? It probably has to do with the fact that wording it the other way around can be perceived as very uncomfortable. Saying, for example, that coldness (or lack of compassion) jeopardises the development of empathy and resilience can feel much more confrontational. It points to where we fall short and what the nasty consequences of that shortage can amount to. It has a much bigger potential of holding us accountable, thus revealing our responsibility and likely also shaking up the status quo of cultural practices and power relations.

With regard to childhood adversity (or ACEs), we could do a thinking exercise to come up with a biological norm. Taking insecure attachment, insufficient coregulation and lack of compassion as the (hidden) norm, offers a pretty sad view of normal human characteristics. As the saying goes: ‘Humans are hardwired for connection.’ Human babies come into the world with a prosocial inclination: they actively seek out positive relations with others. It is their innate tendency; only this way can they survive. It is through social connection that they develop from healthy infants into healthy children and adults. All through humanity’s evolutionary history, humans survived because they were able to offer one another security through close connections, meaningful relationships with caring others, and thus a sense of belonging and purpose. Without all this, humans cannot survive, let alone thrive. Reciprocity is society’s ‘social glue’. Based on our mammalian heritage, we can therefore safely say that connection and feeling safe and secure are the norm for survival and healthy social relations within communities. 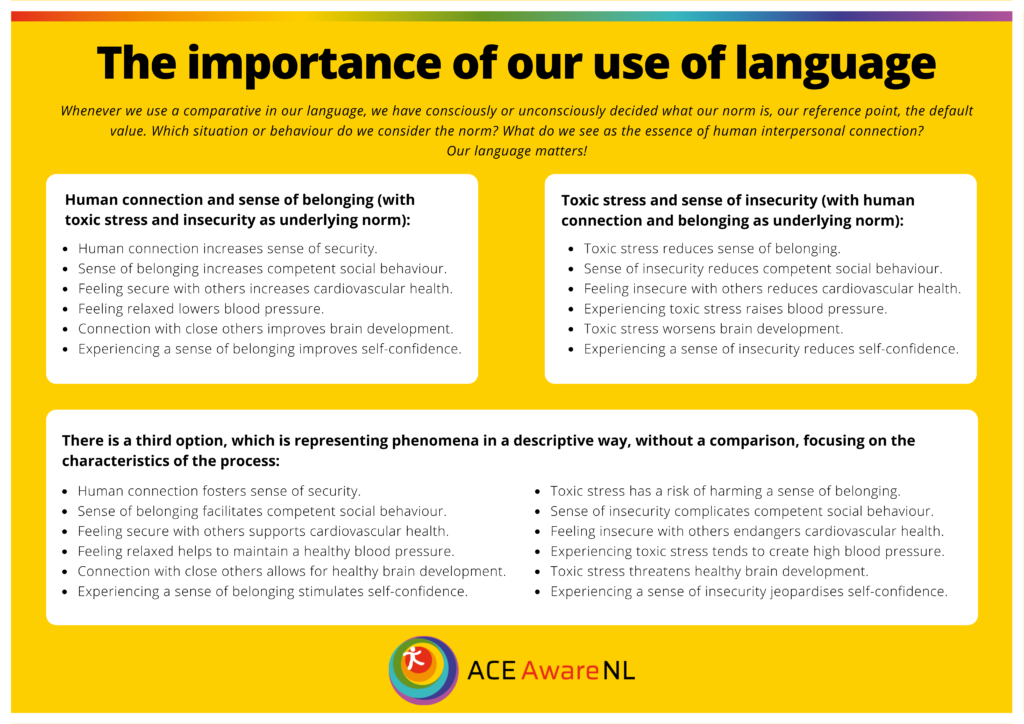 This means that if we want to convey a message about health risks, we should subsequently mention the risk of *lack* of healthy social relations. And if we notice that different forms of structural violence, such as poverty, racism and other inequalities endanger abundant relationship building, we should label those phenomena as risk factors or social determinants of ill health. As confrontational as this may sound… wording it this way prevents the unfair, unethical hiding of the wrong norm in terms like ‘advantages’ and ‘benefits’ of the opposite. Ethical, scientifically sound wording (focus on impact of intervention/experiment) can bring us, as a society, closer to an understanding of what we should stand up against and what needs to be changed. After all, the primal precept in healthcare is ‘First do no harm’, or, originally: ‘Primum non nocere’. Naming what is harmful, facilitates tackling it. Not naming it, is unethical, deceitful withholding of information. Calling toxic stress or too many work hours or letting babies cry-it-out risk factors, points us in the direction of how to eliminate or reduce the risk. Comparing different practices in scientific research or policy settings is of course necessary to find out where the risks are. Then again, when we have conversations in other social environments with one another, we could also decide to not compare at all. As the visual shows, we can choose to represent a concept by being descriptive in explaining it, not comparative. It might help to become more aware of the fact that life is not a competition, where all is constantly compared to something or someone better or worse. It helps to prevent polarisation and can facilitate placing processes on a continuum instead of in a black-and-white either/or-category.

In any case, the point clearly seems to be this: whenever we use a comparative in our language, we have consciously or unconsciously decided what our norm is, our reference point, the default value. Which situation or behaviour do we consider the norm? What do we see as the essence of human interpersonal connection? It can be very revealing to reflect on this and if we need to choose a norm, to do so consciously and carefully. As Diane says: ‘Everything changes when we change the norm’, including how the media reports on health risks. To consistently use a valid norm in our language can be a challenge, but it can definitely be learned. Why try? Because, as we learned from Diane Wiessinger, our language matters and we honestly need to watch it!