When I open the front door, Henriëtte Markink, nurse practitioner, stands before me with a bright smile. We have never met before, but straight away I have the feeling that we are going to have a beautiful conversation. Already in the hallway, we start a lively chat, about the charm of old houses. Those have their user’s manual and idiosyncrasies and also their strengths and weaknesses, but mostly, we agree, they show their own character in a wonderful way. You can feel it, if you are in a building that has a long history and in which highs and lows have taken place. Only in hindsight I realise that this aspect is a guiding line through our conversation. 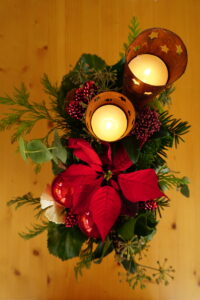 It is the beginning of January; the Christmas tree is gone, but a couple of last decorations give away that the holidays are only just over. Because darkness still sets in early, I have lit a couple of candles and we drink a fresh, hot tea with a sweet new year’s treat. It has already been leaked to the media that tomorrow’s press conference will announce that the present lockdown, that started mid-December, will be prolonged by another three weeks. We speak about our concerns regarding the impact of this on the degree to which stress is rising for many. Many people only have very limited opportunity to have positive social experiences these days, or they struggle with income insecurity or with working from home while all the kids are there. Henriëtte lives in the Achterhoek, the eastern middle part of the Netherlands, and her partner is in the restaurant and catering business, so they both experience the present problems in a very direct way, she through extra work with stressed out patients, he through a lack of work with dinner guests. Both are dealing with the complexity of finding creative solutions.
He came to Assen with her, so that together they had a little outing. We laugh about it, but also discuss how strange and sad it is, that you almost get nervously excited now and then, when you sit at the table with other people and have a good time together. It is that deeply rooted in us, that need for human contact. If it is lacking, many get stranded and stuck. Henriëtte sees in her environment that life is very complex for some young people at the moment and that, as a consequence of loneliness and boredom, drug use increases.

Via this topic of the present corona circumstances, we land at her work with patients suffering from psycho-trauma and stress-related issues in a small institution for mental health. Through a moving interview with her  about those topics, I got acquainted with her views. I decided to take a bold step and asked whether I could have a conversation with her, because I find it so hopeful and inspiring to speak with professionals who consider the early years to be at the heart of the foundation under the life that follows. “In situations of drug use, there is usually only one question being asked: ‘How are you going to change your habits?’ – but that is not enough. It reminds me of a patient who said to me: ‘Never before did I tell so much about the background of my trauma as I do with you now.’ She felt guilty about a lot of things, which usually makes me ask: ‘Can you take a step back and look at those events; how old were you? Can you still remember how and what happened? Can you put things in that former context?’ For many people with childhood trauma, this is hard, but if you help them and explain what happens in the body in relation to such experiences, then they become aware that as a child, you do not have to feel guilty.” After her studies to become a nurse (graduated in 1983 for HBO-V), Henriëtte obtained a first year in Sociology at the University of Amsterdam and next to her studies, she worked as a nurse on a psychiatric ward. After that year, she got a permanent job at a psychiatric admission department. After the birth of her children, she became a socio-therapist and she got in touch with young adults that sometimes brought quite an amount of baggage from their childhood: “Those youngsters came from a certain nest and there was a lot behind their stories. By then, I had become very interested in child development and attachment and bonding; I have always found that a very fascinating subject. My employer was looking for a socio-therapist for a trauma group. That was very rare in those days, but after a long session in a think tank in the institution where I worked, they decided they wanted a female socio-therapist for that group and I was fully into it. I was pretty naive when I entered, because I didn’t know very much about trauma treatment at the time. Also, I did not really have a clue about the effect of trauma on the human life course. Fortunately, I was working with a very experienced clinical psychologist in an era in which there was still time available for intervision, even though the literature did not yet have much to say about the topic. Slowly but surely, more treatment options arose, in which physical methods played an important role, such as psychomotor therapy, trauma-sensitive yoga or other more body-oriented approaches in the psychological treatment. The most important, however, was that people could tell their stories and that they could listen to themselves telling their own stories, that they would come ‘out of their heads’ and would be more present in their bodies and become more sensitive to their feelings. I was completely fascinated by their narratives. In the group sessions, people described these narratives to us as therapists, but by doing so they were also opening up to the group.

They would come once a week for a whole day. During that day, it was important for them to learn and see what their survival mechanisms were. We discussed the usefulness of those coping strategies and how good it was that they had worked until now, but that they had stopped working and even become dysfunctional. Then, the question became how they could change that and how they could break their patterns.”

When she was looking for more challenges, she started studying to become a nurse practitioner (graduated 2010), a discipline still in its early stages then. “The point is…what I had noticed, was that people with trauma in their history had a lot of physical issues and pathology, such as asthma,  infections, chronic fatigue, sleeplessness, arthritis and fibromyalgia, but also long and traumatic birthing experiences. The more I saw, the more I thought that this could not be a coincidence…or was it? That, I wanted to dive into. Thus, I decided to do a literature review for my studies to find out more about physical illness after a trauma history and that is how I became aware of the ACE-study by Anda and Felitti. And I kept reading and found that there was much more that showed a correlation between chronic stress and physical issues. Both for me and for my clients, much fell into place! Finally, I was able to explain to them that it wasn’t all that strange that they suffered from this and that and so and so. If your body is constantly tense, it is not so hard to imagine that this will influence your joints, your breathing, your heart. To be able to tell them that, works very ‘deguiltifying’ for people. Yet, when it comes to very serious diseases, I am very careful. I explain that chronic stress can lead to physical disease, but I do not mention asthma or cancer, even though we know that with chronic stress, chances of cancer also increase. I remember a woman who was once a client of mine and who died of cancer after a long period of time; she said to me: ‘You don’t have to tell me that; I know that this is the cause.’ So yes…”

We sit in silence for a while, after she tells this. It is always impressive to hear how people’s inner wisdom can sometimes lead to intensely sad conclusions like this one. It is not easy for a healthcare provider to decide on how to handle these insights. If someone is not ready to consider this correlational option, in a stage of life where nothing can be changed about the former events anymore…does it still work ‘deguiltifying’ or rather retraumatising…? And less personal, but more at the societal level…If statistics provide us with these correlations, how can we take care that much more attention is being paid to those links by all policymakers and healthcare providers who are in favour of real prevention? Quite often, the narrative about people with certain diseases and addictions is quite different. Henriëtte: “About people with psychotrauma-related disorders, there was this idea that they neglected themselves, were either addicted or sensitive to addiction, inclined to be sexually overactive with a lot of promiscuity and unprotected sex, which was supposed to cause them to contract all kinds of diseases. In the scientific literature, however, this view has been flawed already quite some time ago. We have known for a while now that many diseases stem from what happens inside your body. And now that the last years have provided us with so much neurocognitive research data, we have found out that our brain…yes, well…I was about to say… infects our bodies! That is not the right wording, but I mean that an overstimulated brain has an enormous impact on our health. I really savour studies like these, because they give us so much more insight in what goes on in people as a result of stress and trauma!” 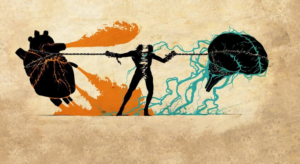 I look at her and cannot resist the urge to put on the table that impossible term that at the same time summarises all the aspects so brilliantly: psychoneuroimmunoendocrinology. For a couple of minutes, we have much fun about this word, but we conclude that this is what it is all about, about the physiological processes that call into question the dualistic thinking: body and mind are not separate aspects of humanness. Together, they are one big system, in which the psyche, the neurological system, the immune system and the hormonal system are intricately and inextricably connected. “Isn’t that beautiful?”, Henriëtte says, “and in fact, we have known this for a long time! In my view, we can only head towards really good treatment if we can let go of dualism completely, but we still have a long way to go to get there…”

Next week, we travel further with Henriëtte and hear more about her experiences in her work with people with childhood trauma.