No mistakes, but a shared quest

Recently we received a message via someone’s Facebook page about an article by Ouders van Nu. A discussion arose among the readers of the message about, among other things, whether it was written for parents of ‘now’, or more for parents of ‘the past’. Several people also found the tone patronising and had difficulty with the resoluteness of certain formulations, starting with the word ‘mistakes’ in the title (‘7 ‘mistakes that many new parents make around the issue of their baby’s sleep’).
The text of the article is not super recent, but from 2021. Nevertheless, around this time last year, the insights were already such that some comments can be made about the message to young parents. They deserve honest information and support in their completely new search, not a negative judgment about their choices. We would therefore like to discuss some aspects that can influence the perception of security of both the child and the parent in the parental role. This perception of security has a major influence on how we develop as humans and therefore also on our total health.

Indeed, let’s start with the title: mistakes. That’s a tricky opening. What does it mean for new parents to read that choices they make are ‘wrong’ choices…? On a more fundamental level: who determines what is ‘right’ or ‘wrong’…? Is there an unequivocal answer to that? How does our culture influence ideas about this? How do those kinds of ideas relate to norms and values ​​and visions of parents’ responsibility towards their baby? How do we view the task you have as parents? In it we can imagine a whole continuum, from a difficult, gruelling task that you have to work through until your children finally stand on their own two feet… to an honourable, joyful task in which you can lead a totally dependent person into adulthood… and all degrees of experience in between. More questions: what does the science say about children’s needs and how do we feel about that? What about children’s rights to have their evolutionarily imprinted needs satisfied? How well-known are those needs in society as a whole? The answers to these questions determine how we want to interact with these little creatures as long as they are completely dependent on us as adults for their survival and well-being. Sleep: many think that sleep is something a baby needs to learn, but of course it isn’t. Babies already do that in the womb. This means they can already sleep before they are born. What we may often do is give them an experience of our world that makes it harder for them to confidently surrender to that sleep. When do we ourselves dread the night? When are we ourselves unable to fall asleep or do we keep waking up, looking for comfort and reassurance in the middle of the night? And when we need it… what do we do? How does what we as adults can do to regulate ourselves and go back to sleep compare to what a baby can initiate on their own? What is the definition of an ‘easy sleeper’? Who should it be ‘easy’ for? What is the definition of ‘good sleep’? What is the definition of ‘sleeping through the night’? Do we always sleep ‘through’, without waking up even once? And if not, where does that come from and what do we do about it (or against it)?

Crybaby, lottery, roar, terror: many words are used that create a certain atmosphere. In another word, this is called ‘framing’: you convey something in a certain way to realise a vision. You want to propagate a certain opinion and try to convince the reader or listener of this by choosing words that convey that specific atmosphere. How helpful is it to ‘frame’ the expressions of totally dependent babies with negative terms, while they rely for everything they need on their caregivers’ willingness to make things right? If a baby cannot sleep well… who is it worst for? If a baby cannot surrender to sleep… how can we explain the restlessness of that little child? Who is able to change which things about it? What is meant by the admonition not to worry about your baby’s sleeping behaviour? 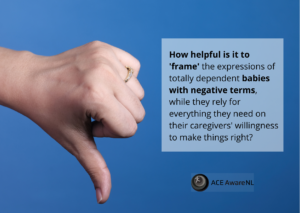 Falling asleep on the couch with your baby in your arms is said to be one of the best things in the world. That in itself is a nice statement. However, it continues with the remark that this is dangerous, just like ‘bedsharing’ (letting your baby sleep in your bed). Firstly, the latter is not true, provided you have worked on a number of conditions beforehand. Second, why do parents fall asleep on the couch with their baby rather than in a safe setting in bed? This is often because parents are constantly being terrified by healthcare providers and policy makers and media outlets about bedsharing, although humanity has been cosleeping with its own children for millennia. Next thing, parents then sit on a sofa or chair while parent and child are both tired, because taking the baby to bed is ‘forbidden’. However, sharing the sleeping place is the norm for mammals, and therefore also for humans. The fact that we put babies to sleep separately, sometimes in another room, is very ‘weird’ from a socio-cultural and anthropological point of view and occurs mainly in WEIRD countries (Western, Educated, Industrialised, Rich, Democratic). It is an historic novelty, a departure from what we have always done as humans. Given the enormous numbers of people who can only sleep with the help of sleep medication, it seems a good idea to ask ourselves more often whether all those sleeping problems may have a cultural cause. Could they have their origins in childhood? Could they be related to what parents are advised and sometimes forced to do regarding sleep behaviour…? These may be uncomfortable, but nevertheless important questions to ask and investigate. 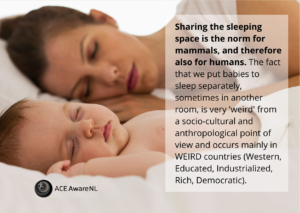 Sleeping in a car seat: that is indeed not a very good idea. Sleeping in a sling, on the other hand, is wonderful for a baby. If the cloth is properly knotted and the baby is worn in en ergonomically responsible way, this is in all respects a very beneficial place to sleep for a young child and for the parent it is often a very practical way to have their hands free while baby sleeps.

A bed surround: the risk of SIDS is mentioned here. It is indeed important to make a baby’s sleeping place safe. This applies to both a cot (where instructions for distance between the bars and mattress thickness and what not are considered very normal and are even bound by legal regulations) and an adult bed where the child sleeps together with the parents (a setting usually described as extremely risky, despite the extensive research to the contrary). It is interesting, by the way, that this phenomenon is called ‘cot death’. It names the place where the child dies. Maybe that crib is not as safe as is often claimed…? Whatever the case… cots are not forbidden. And in the tragic cases where a child dies in the parental bed… was the condition of the parents checked? Had they been drinking, smoking, taking medication? In other words: was it the sleeping place or the condition the parents were in? Here also, negative framing is often involved.

Next week, we will look at another couple of aspects.