We left with a group of about fifteen people from the location where we had enjoyed coffee and tea and delicious Valentine’s pastries. Many of us had not met before or only briefly and we would go for a brisk walk to enjoy the fresh winter air and get to know each other. Moreover, in this way we would have a good appetite for lunch after returning from the nature reserve. One of those joining was Chris and after walking with others for a while I got into a conversation with him. He is the coordinator of the Port of Kloosterveen, part of the Phusis Foundation. I already knew that he did various things, but I was especially curious about his ‘core business’: “We take care of young people who have to deal with hard-to-raise parents”, was his answer, while he looked at me with shining eyes. I burst out laughing: “Wow, what a great formulation! I like it!” He smiled back, and through my exuberant reaction he quickly noticed that I understood what he was referring to. Conversely, I quickly noticed that he understood what intergenerational transmission means. We got into a fascinating conversation that lasted the rest of the walk. 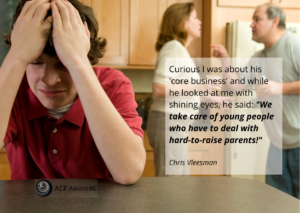 I told him that I had experienced a similar reversal just the week before. I had seen a text that spoke about confused people who end up in acute care and pose a ‘security risk’ to the social environment. While reading, I had thought of what happens if it is not possible to lay a solid foundation in childhood for the rest of life and how a ‘security risk’ arises for children. That way of looking at the term also has a different interpretation than the most common. The term ‘difficult to raise’ usually refers to the result of parenthood, to a child who is ‘difficult’. The term ‘security risk’ is usually thought of as the result of a life with so many obstacles that it leads to aggression and uncontrollable behaviour. What Chris meant, however, was that the kids are having a hard time because their parents do not really understand what they need and how to provide it. That was what I meant, too: if children do not receive what they need to thrive in their ‘first 1,000 days’, if they do not build secure attachment, they are in for an extra hurdle. Then the social environment creates a ‘security risk’, a chance that these children’s sense of security will come under pressure.

Ultimately, of course, it comes down to what approach you take when people go through their daily lives searching or wandering or getting lost, and then need support. Still, it is fascinating to see how a change in your language can help you express your mindset in a creative way. Such an innovative formulation also visualises a range of human images and worldviews. Who is responsible for what? What objectives are you pursuing? From which core values ​​do you offer a lost other a place in life, in your life? How do you want to contribute to a situation where the person you care for can find, can choose, can have their own place in the world? In the healthcare sector, it is often about how much money it costs when people ‘derail’. Chris also had ideas about this: “An ounce of well-being saves a kilo of care!” he said, as we walked a foot-wide path through a field of grass and heather in winter dress. Chris talked about the daily impact of his philosophy. The colleagues, as they are called, find their place in the care company as kitchen assistants, as recreation supervisors, as salesmen, and thus get a full-fledged life again.

Not that it is always easy and without bumps… He smiled at the memory of a week away with a group of guys who smoked way too many joints. He had gone with them to an environment where there was no weed available, but where there was plenty of attention and time for wonderful shared activities. A shaman had led a spiritual session with contemplation and music, and its effect had lasted for weeks and weeks. Even after returning home, hardly a joint was smoked. Other forms of difficult behaviour were also reduced by 50% in settings where he worked with this approach. This was the result of dealing attentively and on an equal footing with young people and young adults who, year after year, had hardly been listened to. “Although things are going well, you should not think that you can just put them somewhere else. Their history has made them vulnerable and if they lose such stable, sensitive care again, the structure in their lives can be destroyed again. Then everything falls out from under them once more, something we still see happening in many places.” We spoke about the great importance of mental well-being and meaningfulness, also and especially for those who do not succeed in shaping this completely on their own.

This also brought us to the subject of Positive Health, which is based on the salutogenetic principle: not looking from pathogenesis (where does disease come from and what should I avoid?), but from salutogenesis (how do I maintain health and what can I do best to achieve this?). At the very least, then, you need a roof over your head and a bed to sleep in. For many troubled young adults, even that is quite a challenge. Chris told about a young person who had come to them from North Africa through all kinds of wanderings and who had found temporary shelter and a safe haven at Chris’ location until a more structural solution was found. Chris and his team use the physical, organisational and legal space available in these types of emergencies. “Here, we work from unconditional love”, he described the essence of their policy. That was very different from what I had heard the week before from a manager who unfortunately had to conclude that still quite often, not compassion, but repression is the standard when people in an institution are ‘unmanageable’. Chris had touched me with his vision and stories. When he asked where my professional interest lay, I told about ACEs, about the influence of insecure attachment on adult health and about how, after two strange years, we as ACE Aware NL finally want to show the film ‘Resilience’ through live encounters. As I had listened to him, I had realised that I would very much like to watch the documentary film with the experienced young adults. I fantasised out loud about how wonderful it would be to listen to their thoughts on it and then hear in a focus group what had appealed to them in the film and what they had recognised. Chris, too, saw the beauty of that.

Back from the walk, during lunch, we miraculously ended up speaking about trauma again with the four people at our table, about how it can lead us to want to follow our care instincts, so that someone else does not have to experience what was so difficult and sad for ourselves. We also talked about how current circumstances touch on a lot of pain from the past and create pain for the future: after all, humans are not made to function in isolation from others. We also realised how such situations hold up a mirror to us: what do we find difficult in what we feel and see happening? Do we really want to help the other person? Or are we often feverishly looking for relief from the pain that still slumbers within ourselves…? One table companion would like to delve deeper into this, given their own life story. That intention is now there.
And Chris and I will soon be sitting down together to see how a movie screening can take shape. Is it not a wonder how sometimes at the most unexpected occasions you come up with inspiring ideas and meet the most beautiful people? What a Valentine’s Day meeting!